At the Border Line Crisis Center in Tijuana, Mexico, 40 women and children sleep on makeshift beds inside tents pitched on a cement floor. One woman, a single mother who fled Haiti, said the shelter gave her family refuge from extreme violence and rampant unemployment. Another woman, an asylum seeker from Honduras, said that after being homeless and jobless for three years, the shelter provided her first stable opportunity to earn money.

On Aug. 29, these women shared their stories with a group of 60 Asian American and Pacific Islander labor leaders and immigration activists from across the U.S. who convened for a weekend of educational workshops, community tours and solidarity-building conversations in San Diego and Tijuana. The event was hosted by the UCLA Labor Center in partnership with the Asian Pacific American Labor Alliance, the first and only national organization of AAPI workers.

After listening to the experiences of migrant workers, displaced refugees and asylum seekers, the participants came away with a shared goal of transforming their day-long tour into a years-long project for immigrant, racial and labor justice that unites communities across border walls.

“This was a powerful learning journey that brought people together to learn about what is happening on the front lines of a humanitarian crisis in Tijuana,” said Kent Wong, director of the UCLA Labor Center who helped found the Asian Pacific American Labor Alliance in 1992. 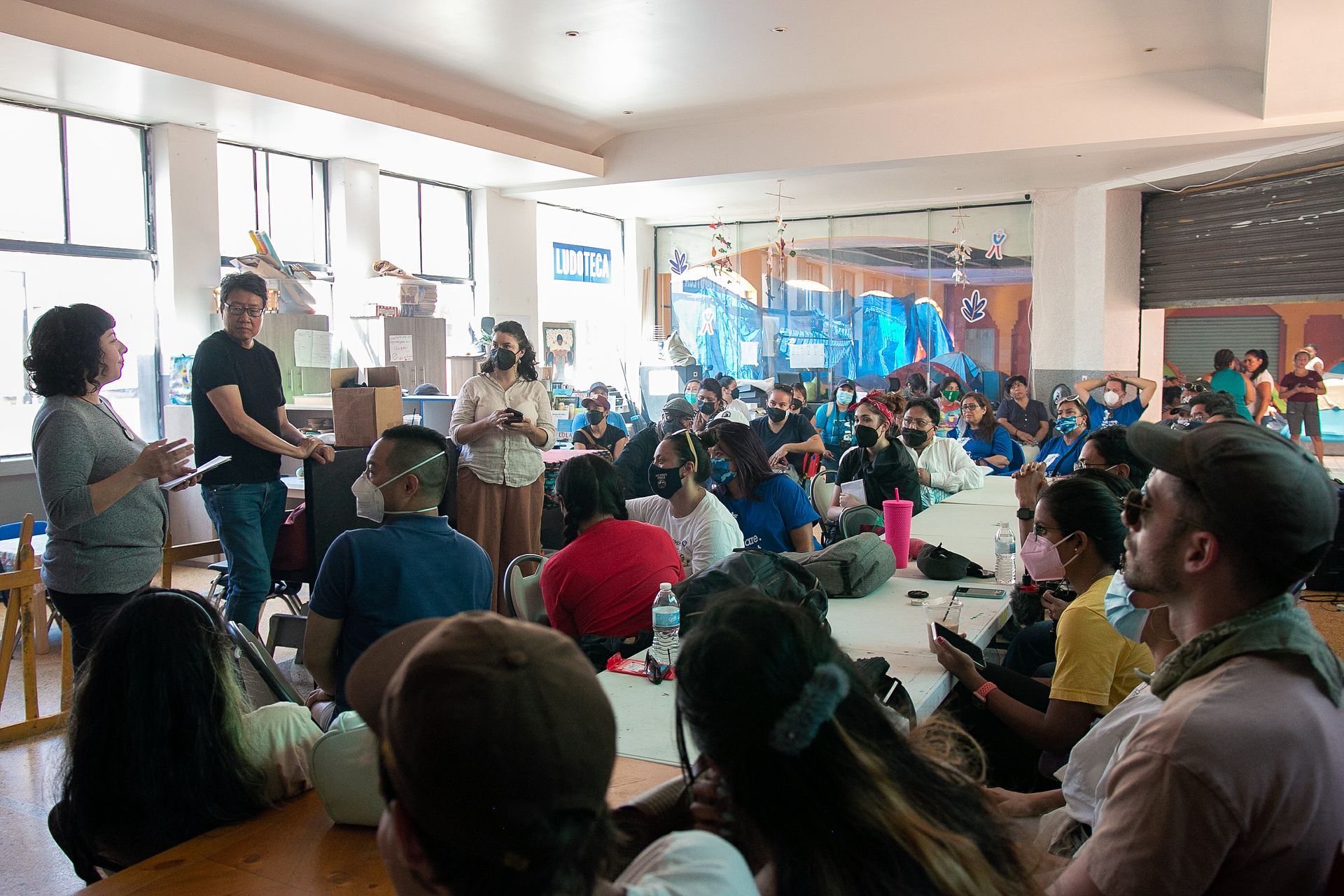 Emily Jo Wharry/UCLA
Judith Cabrera, co-director of the Border Line Crisis Center in Tijuana, Mexico, speaks to a group of Asian American and Pacific Islander labor leaders and immigration activists from across the U.S. Her shelter often exceeds capacity, accepting anywhere from 30-140 homeless women and children.

“The UCLA Labor Center is deeply engaged in advancing worker justice and immigrant justice,” Wong said. “It’s these types of university and community partnerships that allow us to not only understand the roots of the crisis, but collectively explore policy solutions.”

The labor center and the Asian Pacific American Labor Alliance, with support from the W.K. Kellogg Foundation, the California Department of Social Services and the Cathay Bank Foundation, have been leading a broader 2022 Racial Justice Campaign focused on bringing attention to the critical need for unions to take action on the interconnected issues of racial justice, immigrant rights and worker rights.

UCLA alumna Kendy Rivera Cárdenas, a Tijuana-based migration field specialist at the Solidarity Center and former senior public administration analyst with the UCLA Labor Center’s Global Solidarity Project, worked with the UCLA Dream Resource Center’s summer fellows to help coordinate the group’s visit. Rivera Cárdenas, who earned her doctorate and a master’s at UCLA in Chicana/o and Central American studies, conducted her research on the Tijuana-San Diego divide. She said she sees a deep connection between labor organizing in the U.S. and abroad.

“Migrants are workers. Migrants create jobs. Migrants are tied to the U.S.,” Rivera Cárdenas said. “There’s power to organizing and unionizing with migrant workers not just at the border, but throughout Mexico and the Americas. These spaces are connected transnationally, so we continue to build and strengthen a network of cross-border solidarity. Money flows globally. Why should our organizing stop nationally?”

Participants who attended the workshop traveled across Tijuana by bus to visit a migrant shelter and vocational training center, as well as participate in a silent march and church service at the border wall’s Friendship Park to honor separated families. They spoke with local community leaders, worker organizers, lawyers and deported military veterans to learn about the struggles that a record-breaking number of migrants, refugees, asylum seekers and deportees face at the U.S.-Mexico border.

The most important problem is a lack of jobs, said Judith Cabrera, co-director of the Border Line Crisis Center. She cited a recent survey by the International Rescue Committee, which found that 96% of displaced people at the northern Mexican border lack money to cover their basic needs — an obstacle that in turn prevents them from securing necessities such as safe housing, clothing, hygiene products and baby products.

For many of the tour’s participants, crossing the border and visiting the shelter brought back emotional memories of their own migration, or that of their parents. Some shared that it was unexpectedly traumatic, but ultimately left them feeling thankful.

“The hope and courage that these folks have in their hearts pushed them to leave their home — to go into the unknown not knowing what waits for them. I know that many of us, and our ancestors, also made that choice,” said Brady Calma, president of the labor alliance. “We can take that hope and courage that we witnessed in Tijuana and make it a light for the rest of our communities. I appreciate the UCLA Labor Center for recognizing the urgency of this mission for justice.” 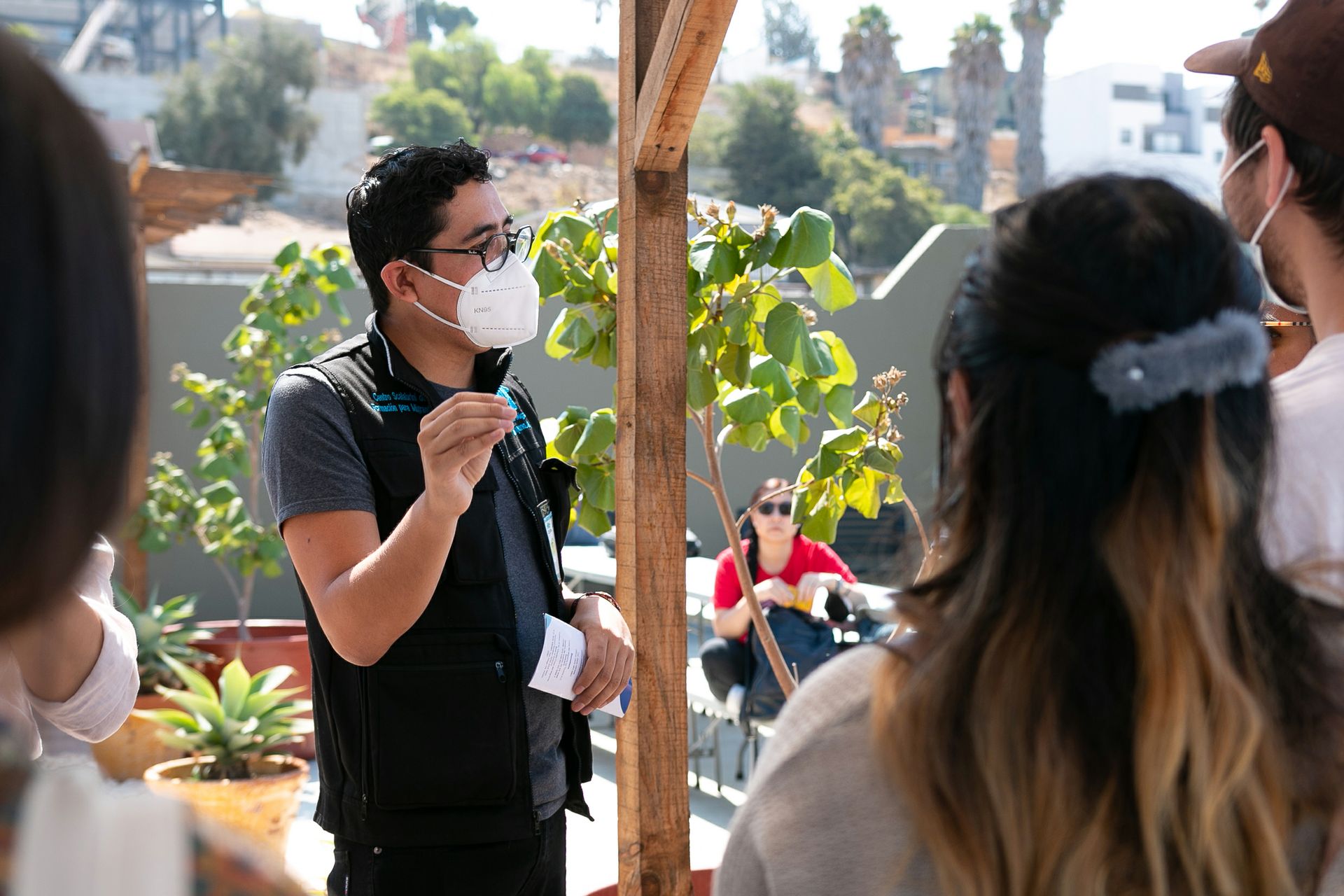 As the sun set on Tijuana, the Border Line Crisis Center’s staff and residents hosted the tour group for a dinner of tacos and horchata. Participants exchanged contact information, pledged donations and began to draft a timeline for how they would carry their experience back to their organizations and hold each other accountable for future collaboration.

Rivera Cárdenas, whose labor organizing experience dates back to her time as a UCLA student, encourages other UCLA community members to look for opportunities for justice in their own backyard.

“Take the university beyond the classroom and into the streets, because really, the university — especially a public university like the University of California, one of the most powerful higher educational systems in the nation — should be setting that example,” Rivera Cárdenas said. “We can make very big, wonderful and phenomenal shifts when we think broadly and think as a community of constituents.”

“One of the participants shared how they couldn’t go back to their home country to see their grandmother’s funeral when she passed away. And she started crying and tearing up, and that gave me a strong sense of urgency. It was a really grounding and humbling experience for me,” said Ju Hong, director of the UCLA Dream Resource Center. “When we have a really authentic space to be vulnerable and share space and talk about personal stories, that’s very powerful. … UCLA played a really critical role in providing resources and space to have this type of conversation.”

Said Justine Lim, UCLA alumna of labor studies and political science and incoming project coordinator at the UCLA Dream Resource Center: “What I want out of this is to build a network of undocuAPI folks to inspire and empower a new generation of undocuAPI. I knew what it was like to feel isolated, and if I had that connection early on, it would have really inspired and empowered me.”