Two small but formative events in 1927 accelerated the creation of the university that became UCLA. First, the official name became University of California at Los Angeles. Southern Branch was dropped from the original Vermont Avenue campus.

And on May 3, ground was broken in the hills above Westwood for construction of a new campus approved by voters two years earlier. The lightly populated area of rolling chaparral slopes and jackrabbits west of Beverly Hills had been annexed into Los Angeles in 1926.

Work began on the future Westwood campus with the construction of a bridge over the shallow ravine that divided most of the 200 acres from the street that became Hilgard Avenue, on the eastern edge of the barley and grass-covered fields. The bridge, designed by university architect George W. Kelham, borrowed its look from arched Roman aqueducts, with three curves of reinforced concrete, diamond patterns of carved limestone and inlaid red brick with decorative parapets. Extending 300 feet long, the bridge stood 50 feet above the wild arroyo and allowed access to the site by construction trucks — and by working mules.

Kelham and David C. Allison, the architect who had designed the Southern Branch campus, fashioned a master plan for the Westwood hills that continued the Italian Romanesque style found on Vermont Avenue. The university’s Board of Regents had considered Spanish colonial or early California motifs that would have cost less and perhaps looked more authentic to the coastal region. In the end, the Spanish architectural styles were dismissed as not grandiose enough.

Of the northern Italian architecture chosen, Kelham wrote, “the style lends itself beautifully to texture and color in brick and terra cotta walls, colorful tile roofs and the richness of ornamental detail.” 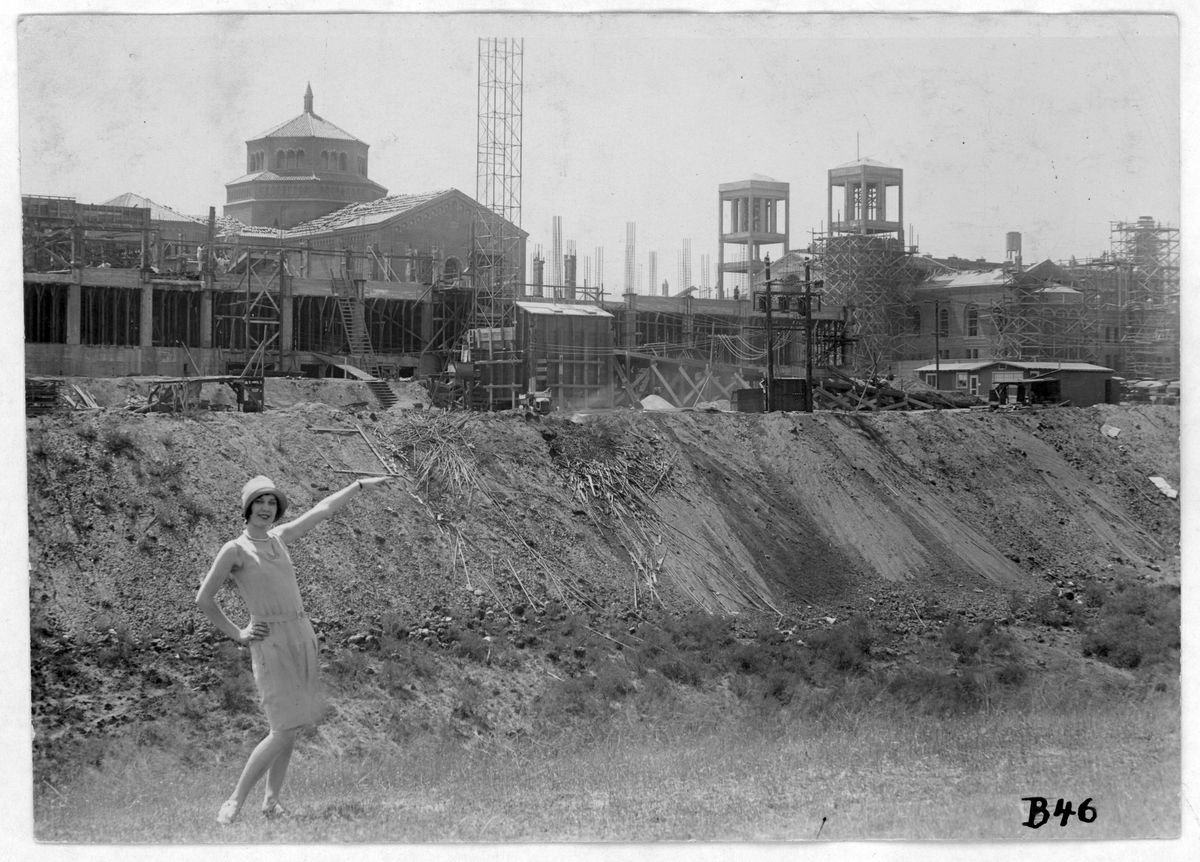 UCLA Archive
A new campus rises in the hills of Westwood.

The first four buildings formed a central quad at a high point on the land. Kelham served as executive architect for the Library and the Chemistry Building (later named Haines Hall). Allison acted as executive architect for Royce Hall, the main classroom and assembly building, and for the Physics-Biology Building (later named Kinsey Hall and now Renée and David Kaplan Hall). The now-iconic exterior of Royce Hall was inspired by the Basilica di Sant’Ambrogio in Milan. The dome atop what’s now Powell Library is copied from the Church of St. Sepolcro in Bologna.

“The brick exteriors take on varying colors in the several hours of the day, their tenderest tones being radiated in the early morning and the late afternoon,” wrote Ernest Carroll Moore, the first director and provost of the new university, which many began calling UCLA.

During construction, this new UCLA faced an existential fight for its survival. The president of the University of California home campus at Berkeley, William Wallace Campbell, still resented that UCLA trained elementary school teachers — a core mission due to the campus’s roots in the Los Angeles State Normal School. Campbell got the UC Board of Regents to approve splitting UCLA into two parts, with only the College of Letters Science moving to Westwood. The Teachers College would remain on Vermont Avenue.

This contrived division sparked years of passionate debate between Berkeley and UCLA’s founders over keeping the young campus united. In part, UCLA needed the old Vermont campus to be sold to help finance the construction at Westwood. Pride and the soul of the new institution were also at stake.

Not until Aug. 14, 1928, after a fiery showdown in the governor’s office, did the regents agree to reverse their position and keep UCLA intact. The new campus in the Westwood hills would get built, but Berkeley and UCLA were not done fighting over independence.

As Royce Hall was nearing completion, architect Allison transferred an inscription to the proscenium arch that had adorned the administration building on Vermont Avenue. Written by UCLA’s Moore, it reads simply, “Education is learning to use the tools which the race has found indispensable.” Campbell railed that the message was unsuitable and unauthorized, since only Berkeley had the power to approve inscriptions on university buildings, even in Los Angeles. It was not the last time the two institutions would squabble over powers and protocol, but in this instance, Moore pushed back and the inscription became a beloved feature of the most recognizable building on the Westwood campus.

Building at the site in the Westwood hills moved with urgency. Maintenance had ceased at the old campus and enrollment had grown so much that UCLA already ranked as one of the most popular liberal arts schools in the country. Bruins were itching to make the move west.

A sneak peek at the new home occurred on March 18, 1929, six months before the official opening. After a fire of unexplained origins destroyed the aging chemistry lab at the Vermont campus, the 125 students enrolled in professor Hosmer W. Stone’s Chemistry 1A course became the first students at Westwood.

They attended class in the morning on Vermont Avenue, and in the afternoon took a bus to Westwood to receive instruction in the brand-new Chemistry Building. (Chemistry was renamed in 1952 for political science professor Charles Grove Haines.) 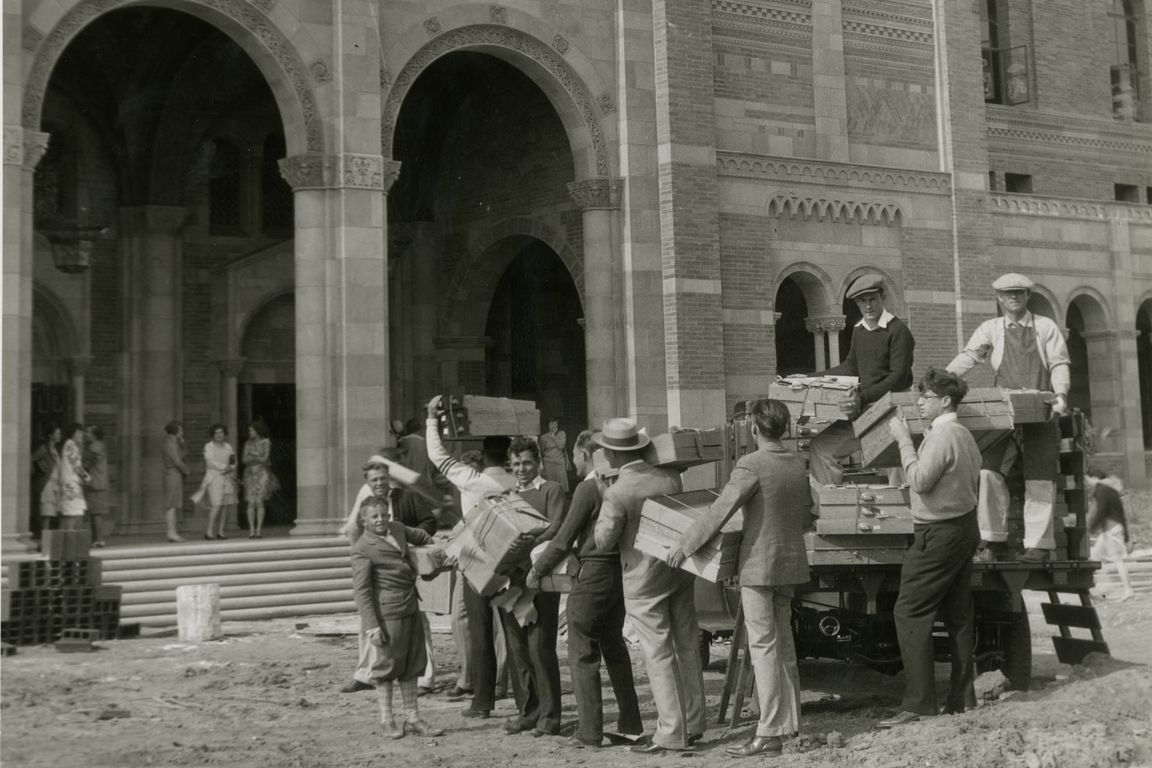 Two months later, May 31, 1929, was a big day in the history of UCLA. Classes on Vermont Avenue were dismissed in the early afternoon. Students, professors and staff gathered on Heliotrope Drive. From there, a 10-mile caravan began to the new campus in Westwood.

“Police led the motorcade of more than 500 cars and trucks loaded with books, furniture and laboratory equipment,“ says the history book “UCLA: The First Century,” by Marina Dundjerski. Moore and the campus military band met the arrivals outside Royce Hall. There were no speeches that day. Students carried the first furnishings into the newest American center of academia.

“It was a thrilling sight to see 2,000 young people pour themselves among the buildings and into them,” Moore said at the time.

After the mostly symbolic Moving Day celebration, the shift west continued through the summer. Some 300 hired students helped complete the move of everything from chairs and desks to chemistry beakers. While the buildings began to resemble university halls, much work remained to be done to prepare the campus for students. There was no grass or landscaping. The grounds still belonged to the coyotes, quail and roadrunners.

When students came to register for the fall semester, recent rains had turned the bare earth to mud. Still, classes began on Sept. 23 for 5,500 enrolled students amidst the construction debris and workmen. “Thus do long dreams come true,” Moore wrote in the Daily Bruin of the time. “It smells of plaster and new paint….there is much dust and confusion…but then no other class will be the first class.” 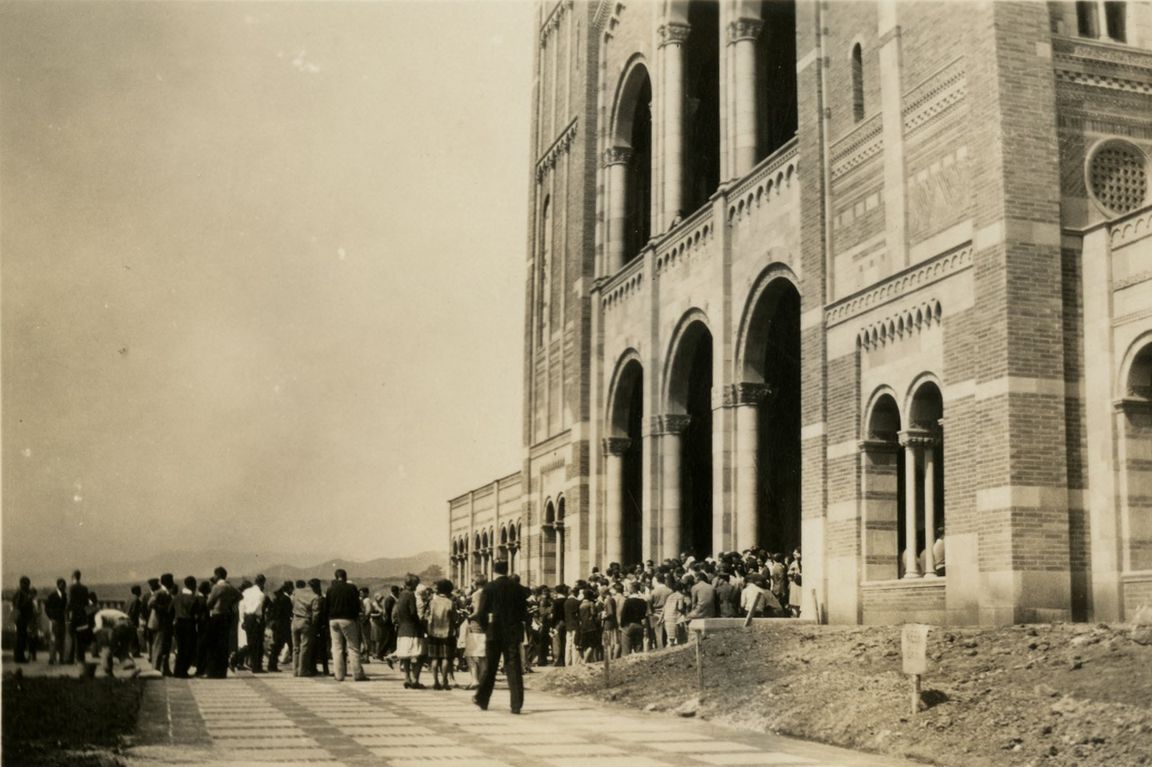 The next day, at the first assembly to be held in Royce Hall, student body president Robert Keith told the students that “UCLA looks forward to a glorious future.” And it’s true, things were happening that would let the students see a more fully mature campus ahead.

Work had begun on a fifth major building, the education and arts hall that would later be named for Moore. A gift of $815,000 from Louise Kerckhoff made possible the construction of Kerckhoff Hall, the student union for many decades, with Tudor Gothic spires chosen to stand out among the Romanesque surroundings.

Allison was the chief architect on Kerckhoff and on the women’s gymnasium down the hill from the original quad. Kelham led the design on the men’s gymnasium. The paired gyms stood side by side along Stone Canyon Road, a dirt street lined with eucalyptus trees planted by the Daughters of the American Revolution. Students reached the gyms and the parking lots beyond via a grand set of steps initially dubbed the 87, later named Janss Steps after the brothers who paid for their construction and for the ceremonial entrance gates facing the Janss’ new shopping district called Westwood Village.

A gift of $300,000 in 1929 financed the construction of Mira Hershey Residence Hall, the first dormitory on the new campus, for women students. In 1930, a Skinner pipe organ transported to California from Boston through the Panama Canal was installed in Royce Hall. The great organ, a gift of the Seeley Mudd family, cost $52,000 and featured 5,122 pipes.

At the official dedication of UCLA in March 1930, scholars representing 161 American colleges and universities and nine foreign institutions took part in two days of guest lectures, pomp and the presentation of honorary degrees to visiting scholars. The new campus was here to stay.

Moore summed up the moment: “This university, like every other university worthy of the name, exists to convert the raw material of untutored judgement into specific discerning of true from false, beauty from ugliness, and right from wrong.” 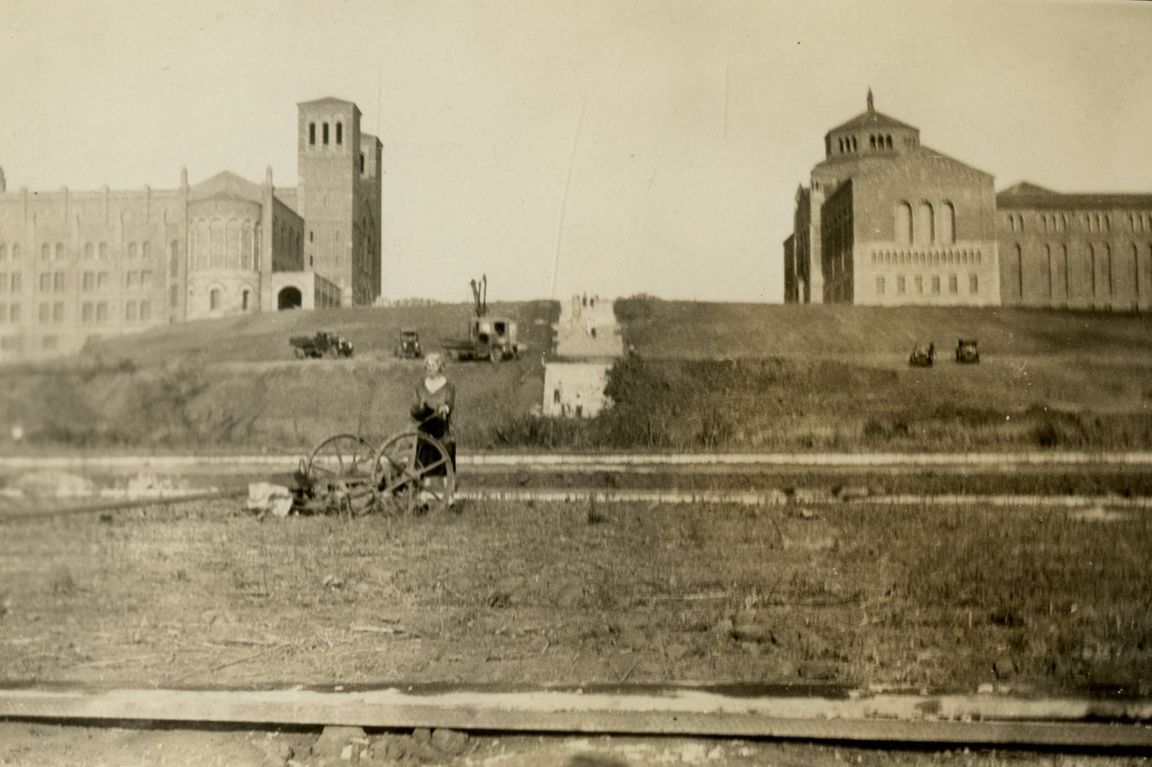 One in an occasional series of stories on the history and lore of UCLA for the campus' centennial year.