It’s been nearly seven years since UCLA senior Kimberly Anyadike took to the skies to honor a group of African-American wartime pilots and make a little history of her own.

Anyadike made national headlines in summer 2009, at age 15, by piloting a single-engine, four-seater Cessna 172 from Compton, California, to Newport News, Virginia, and back, making scheduled stops in a dozen cities along the way.

“Honestly, I didn’t realize how much work it would be, or something that required a lot of focus and energy and dedication to do, I guess because I started when I was so young,” Anyadike said of the 13-day, 6,000-mile journey. “I’m scared of heights, but being in the cockpit is an amazing experience.”

Anyadike, who flew with a safety pilot, as well as a member of the legendary Tuskegee Airmen, is believed to be the youngest African-American, and possibly the youngest person of any race, to complete such a feat, said Robin Petgrave, founder and executive director of Tomorrow’s Aeronautical Museum in Compton.

“Over the years, she’s grown and blossomed into this dynamic individual who is capable of doing anything,” Petgrave said.

Now, Anyadike is majoring in physiological science and minoring in African-American studies and Spanish. She’s also an aspiring cardiovascular surgeon, a registered emergency medical technician, a member of the Flying Samaritans at UCLA, which brings volunteer medical care to Tijuana, Mexico, and a mentor to at-risk youth in South Los Angeles, near where she grew up in Inglewood.

Anyadike and her sister, Kelly, began taking flight lessons at Tomorrow’s Aeronautical Museum in 2006 after reading about Jonathan Strickland, a student at the museum who became the youngest person to fly a helicopter and a fixed wing aircraft solo on the same day.

“If he could do something that impressive, why couldn’t we,” she asked.

Kelly flew four different fixed-wing aircraft on her 16th birthday. Not to be outdone, Kimberly soon followed that by achieving her goal of a coast-to-coast flight.

What made Anyadike’s transcontinental journey particularly moving was the unwavering support she received from the Tuskegee Airmen, the first African-American U.S. military pilots, she said.

“What’s really poignant about their story is that they had to fight two wars; here as well as abroad,” she said. “They had to fight the war of racism in order to be able to even fight for the country they called their own.”

Among them was retired Maj. Levi Thornhill, now 93, who accompanied Anyadike on her journey. Thornhill served overseas during World War II as a propeller specialist and P-47 crew chief.

As Anyadike landed in various cities along the way, 50 of the airmen came out to greet Anyadike and sign the plane — a gesture she still finds humbling.

Anyadike’s achievement in the air was formally recognized by the airmen in May 2015 when they presented her with their inaugural Young Aviator’s Award at a ceremony held in Tuskegee, Alabama.

“To be honored by them still makes me emotional because I don’t feel like I’ve done anything that can hold a light to what they’ve done,” she said. 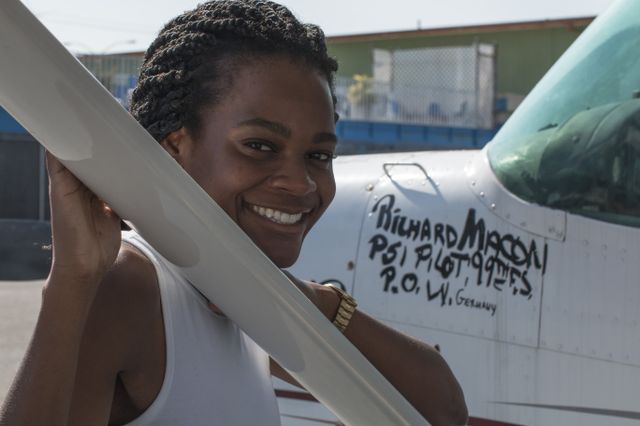 John Vande Wege/UCLA
At 15, Kimberly Anyadike piloted a single-engine Cessna on a 13-day, 6,000-mile journey across the country and back.

Anyadike hopes the perseverance, preparation, excellent communication, quick-thinking and good decision-making she learned as a pilot will help propel her medical career.

“With both, you’re always challenging yourself,” Anyadike said. “When you’re flying, you have to be delicate and correct for changes in wind and just anything that happens in the air. The same goes with surgery. You have to be prepared for anything. If you overcorrect, the patient, just like the plane, is not going to survive.”

A doctor in the making

Her desire to become a surgeon took root as a preschooler. Some of her earliest memories involve painstaking games of Operation and performing surgeries on her teddy bears.

Anyadike was enamored with anatomy lessons led by her mother, who taught Anyadike and her older brother and sister to identify and name all 206 bones in the body as young children.

“My auntie tells this story about how one day while shopping, a woman accidently ran into the back of my mother’s heel with her shopping cart. I was too young to remember this, but I’m told I turned around and yelled ‘don’t run over my mom’s calcaneus.’”

She later learned about the heart and the circulatory system during classes at the Charles Drew University Saturday Science Academy — a South L.A.-based program that teaches students in preschool through 12th grade about science, technology, engineering and math, fosters their appreciation for STEM subjects and encourages them to pursue careers in these areas.

“I was fascinated by the heart,” she said. “Just the fact that it is about the size of your fist, and that it pumps blood all through your body, I thought was amazing.”

UCLA chemistry professor Johnny Pang met Anyadike when she took a class he taught in summer 2013. He said he was immediately struck by her curiosity, cheerfulness and conscientiousness and was pleased when she enrolled in another chemistry class that he taught the next summer.

“She approached problems in such a way that allowed her to think deeper into the concepts and ask many more challenging questions,” Pang said. “I like that Kim never got discouraged even if there were setbacks. She always challenges herself to do better.”

He also thinks that she will make a remarkable doctor.

“Kim has the morals and ethics to be a great surgeon,” Pang said. “She is compassionate with a warm and welcoming personality.”

Inspiring the next generation

This warmth and compassion is already being felt by a new generation of budding scientists and scholars whom Anyadike mentors and tutors at the aeronautical museum and the science academy.

She hopes her efforts will encourage students of color to pursue higher education and not limit their options when it comes to education and employment.

“I’m a mentor in Compton and in Inglewood and I hope to encourage more African-American students and students of color, in general, to apply to places like UCLA, believing that they can get in, and hopefully give them the tools so that they can succeed somewhere like UCLA.”

She added that being a Bruin has been a wonderful opportunity for her, and she has enjoyed her four years in Westwood. She plans to take two summer classes and then take a gap year to do some EMT work and research before enrolling in medical school.

“I ran the marathon in 2012, and I feel like college has also been a marathon. I’m just waiting to cross that finish line.”