Friday, he won third place in the UC Grad Slam finals, the culmination of a systemwide contest that recognizes and rewards the gift of gab — specifically, the ability to summarize complex research for a lay audience in a way that is concise, engaging and illuminating.

Li's presentation, “Traveling to Mars with Immortal Plasma Rockets,” which described how traditional chemical rockets currently used for space propulsion could be replaced with much more efficient plasma thrusters, bested almost 70 Bruins in the UCLA Grad Slam to earn a spot at the UC finals. Grad Slam, now in its second year, challenges master’s and Ph.D. students to break down the topic of their research and explain it in three minutes or less, in terms a general audience can understand. 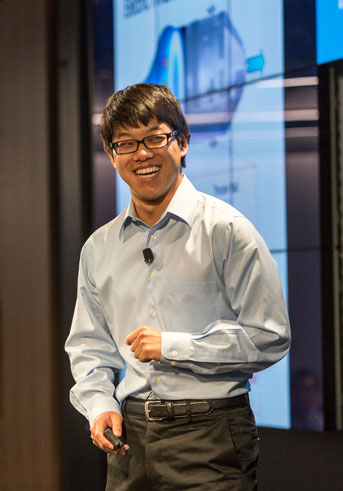 The aim: give UC’s emerging researchers and scholars the tools to communicate their work to a wider audience. Students from every campus participated — roughly 500 graduate students in all — enrolling in public speaking workshops and competing at individual campus contests.

Each campus winner then competed for the top prize — which included campus bragging rights and a $6,000 award. First-place winners from each campus faced off in San Francisco on April 22 before an audience of more than 200 representatives from industry, government and higher education. The students wowed the audience with a window into mind-bending research that explored the secrets of psychology, brains and far-flung corners of the universe. Best of all, they showed that you don’t have to be an expert in astrophysics or cell biology to appreciate the impact of academic research.

“The competitors today are all engaged, in one way or another, in exploration of uncharted territory,” said UC President Janet Napolitano, who served as the event emcee. “Grad Slam gives them the resources they need to share the knowledge they gain in that exploration with the rest of us.”