Architecture and urban design students at UCLA know Verlena Johnson as an academic advisor and student affairs officer, who helps them balance their course loads and makes sure they have the credits to graduate.

But outside of her day job, Johnson is a mixed-media visual artist who creates vivid acrylic and watercolor paintings filled with symbolism. She has a spiritual practice that incorporates Reiki and meditation, has published a children’s book starring her 11-year-old son, Kai, and has been active in promoting diversity on college campuses.

Johnson was born in Chicago and raised in Madison and Beloit, Wisconsin. She studied at the University of Wisconsin-Madison, earning a bachelor’s degree in fine arts with an emphasis in sculpture, and a master’s degree in Afro-American studies with an emphasis in art history. Her thesis paper was on Faith Ringgold, the African American artist whose signature “story quilts” were a major inspiration in Johnson’s work. Her thesis advisor was visual artist and art historian Freida High Tesfagiorgis.

While in Madison, Johnson staged a solo exhibition featuring her “Warrior Women,” series with abstract figurative sculptures made from ceramic, wood, beads, fabric and other materials. Creating movable limbs for those sculptures sparked an interest in puppetry. That interest developed further after she studied with Ghanaian master wood-carvers Djam Vivie and Kwakou Gerai.

“I was finding my voice as a visual artist, and as an academic and intellectual, as a person, as a woman, as a Black woman, as a lesbian. So, issues of identity and all of those things were hugely important and integral to my work, even then,” Johnson said.

Johnson went on to earn a M.F.A. with a focus on sculpture from the School of the Art Institute of Chicago. Her thesis project, “Witness to Whiteness,” a 6-minute mash-up of puppet show, music video and installation, explores the social construction of whiteness and maleness and her location within these constructions (as an African American, multiracial lesbian).

The performance featured a live drummer and guitarist playing along as Johnson sang Queen’s “Bohemian Rhapsody,” while a hand-made puppet named Troy that acted as her alter ego is abducted by a 6-foot spaceship. The eclectic performance took place in an exhibition space in downtown Chicago. She performed the song for the video in a night club where Johnson’s musician father had sung blues, with the club owner at the mixing board. After graduating, Johnson moved to California for her then-partner’s postdoctoral research and to be closer to family, and eventually to Los Angeles “for the weather and also because of the progressive politics,” she said. She joined UCLA in 2008. 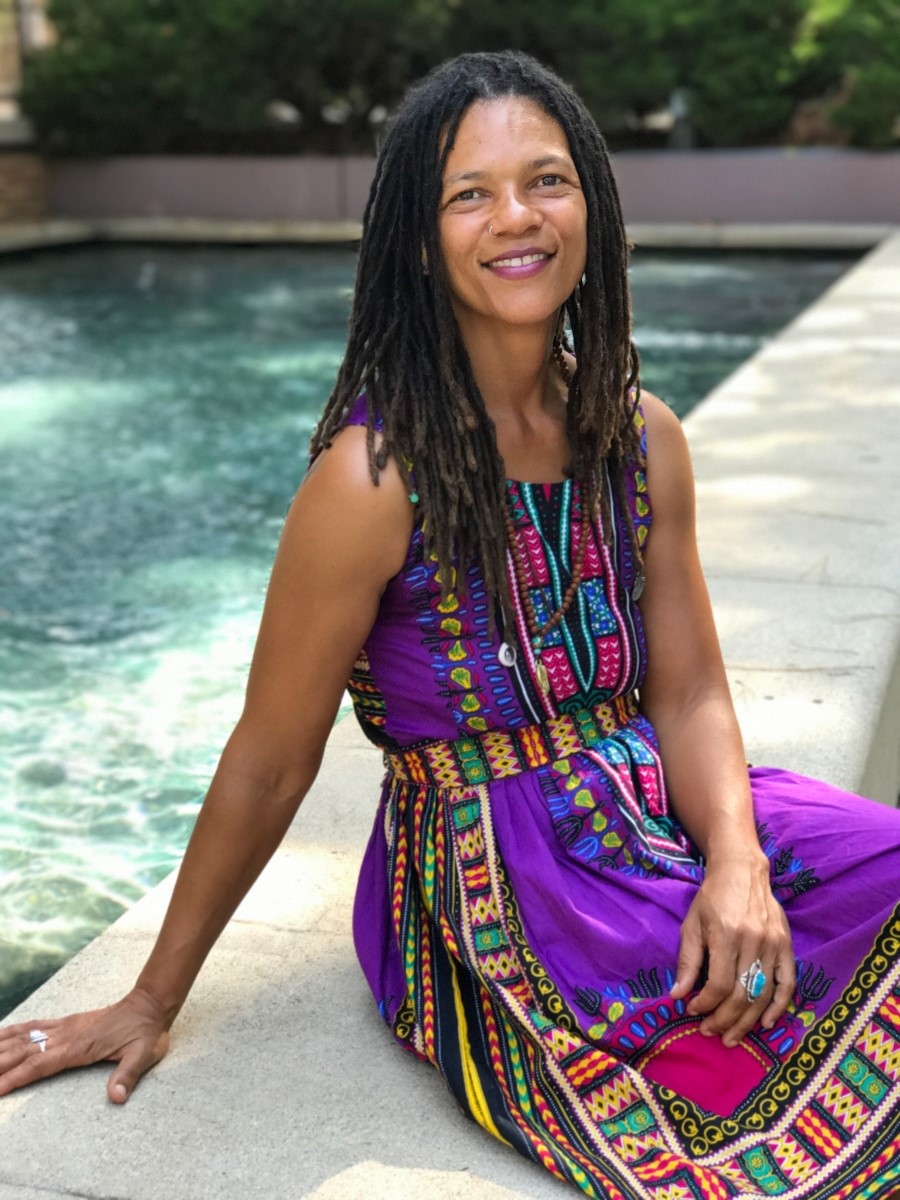 Johnson’s paintings are often self-portraits, and many feature her son, Kai. She weaves in symbols that relate to her African ancestry, such as Adinkra symbols from Ghana, which are often printed onto fabrics or carved into pottery and carry proverbial meaning.

“I remember being in sculpture school as an undergraduate and one of the students, or several of them, asked me why all my subjects were Black. And I looked at them and I said, ‘well, why are all your subjects white?’ To which of course they didn’t even have a response or answer. But because most of my portraiture are self-portraits, of course they’re going to be Black,” she said. Johnson says she recognizes the power of representation and loves celebrating Blackness and Black lives.

In many of Johnson’s portraits, she places halos behind the heads of her subjects. The halos evoke early Christian and Ethiopian icon paintings. Johnson sees the symbols as an attempt to celebrate her divinity.

“I’ve also placed halos behind flowers and birds, because to me, all life is sacred and we are all divine, each and every one of us,” she said.

Other symbols include monarch butterflies, a symbol of transformation and change; black birds, which evoke the border between the earthly and spiritual realms; and spirals, a symbol of eternity and constant change.

Johnson folds her spiritual practice into her artworks. Prior to painting, Johnson might burn sage or cedar, use crystals, or meditate. These manifest as symbols in her paintings as well, as lotus flowers or a focus on the chakras within the body.

Johnson says Lorde was a major influence on her when she started reading her work in college. She even met Lorde at a potluck dinner held by a Black lesbian community organization when the writer came to speak at the University of Wisconsin-Madison. 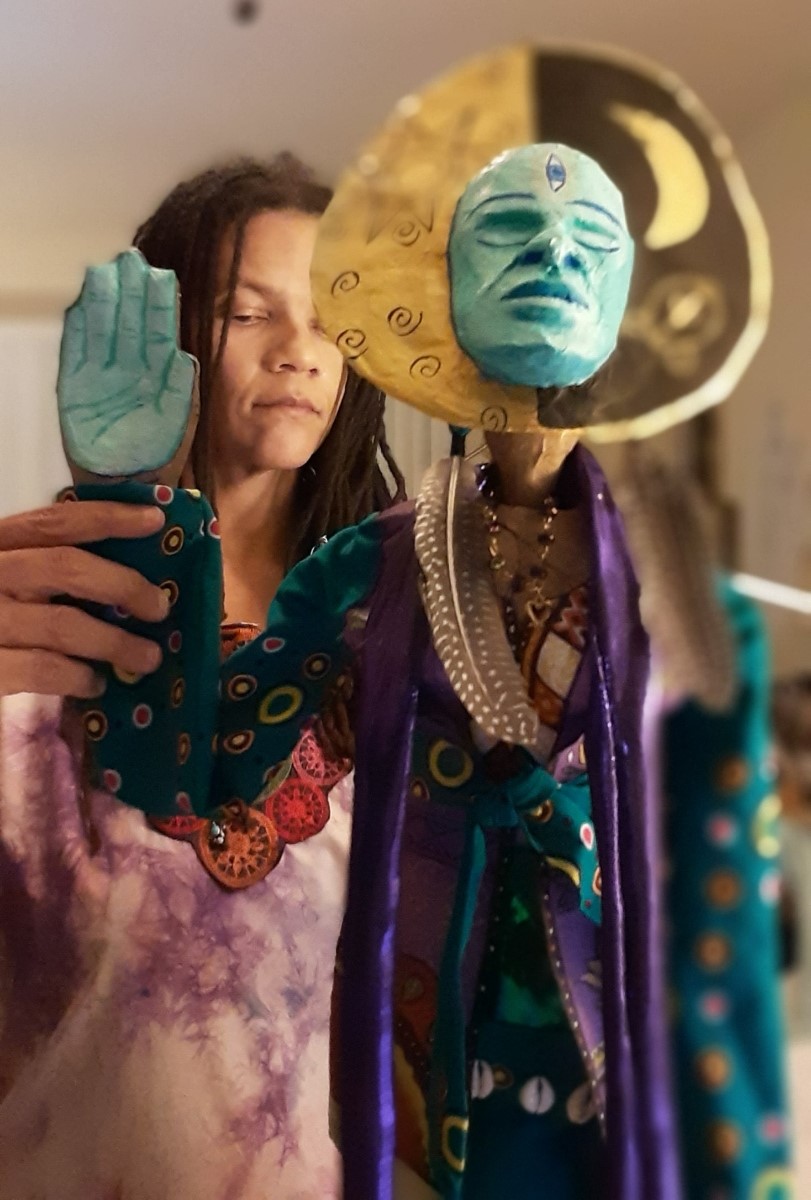 “I just found it so empowering to know that there was another woman who identified as Black and lesbian who was living out in the world and also who happened to be an artist and a beautiful, very powerful writer,” she said.

Johnson hopes to continue adding to the series and exhibit the paintings as a group, and sell them as prints.

“Hope is so powerful and when I’ve seen others overcome seemingly insurmountable barriers and obstacles, that’s just so inspiring to me,” she said. “I also really wanted to honor these individuals and wanted to bring their existence and their lives to some forefront.”

Johnson also wrote and illustrated a children’s book in 2018, “The Adventures of Kai and the Magical Machines.” The main character, a boy named Kai, bonds with his grandfather Gerald, a retired aerospace engineer, as they build robots in his workshop. They create a little green robot, Remi, that builds magical machines. The book switches from gray to color once Kai discovers Remi and the machines.

The book centers both on Kai and Gerald’s intergenerational friendship and the excitement of scientific discovery, imagination and play. At the end of the book, there are historic accounts of African American scientists and engineers referenced in the book, including former NASA astronaut Mae Jemison.

“That goes back to the importance, for me, of history and knowing where one comes from and who one comes from,” she said. “I’ve always loved science fiction and speculative fiction.”

These days, Johnson is juggling her full-time job at UCLA, parenting Kai while he studies at home and maintaining an art practice. She says she has woken at two or three in the morning to have a few hours to paint before starting her work day.

“When I can get up before work and paint for two to five hours, that’s actually ideal. And then if I’m really in a particular piece, then I can often find energy after dinner to paint for a few more hours,” she said.

“When something is really important, you find time, and I absolutely have to produce work,” she said. “I have to be painting or drawing much of the time.”

Johnson also has a “toolbox” of strategies for remaining sane and productive during a pandemic: expressing and acknowledging gratitude every morning, a daily meditation practice, physical exercise such as biking and going for walks around her Tarzana neighborhood, practicing yoga, listening to music, burning sage and spending quiet time with Kai.

“Any activity that I take on, I just try to be very gentle with myself, and not be judging or feeling like I should be doing any particular thing,” she said. “My life is about being grounded, being healed, feeling inspired, finding beauty.” 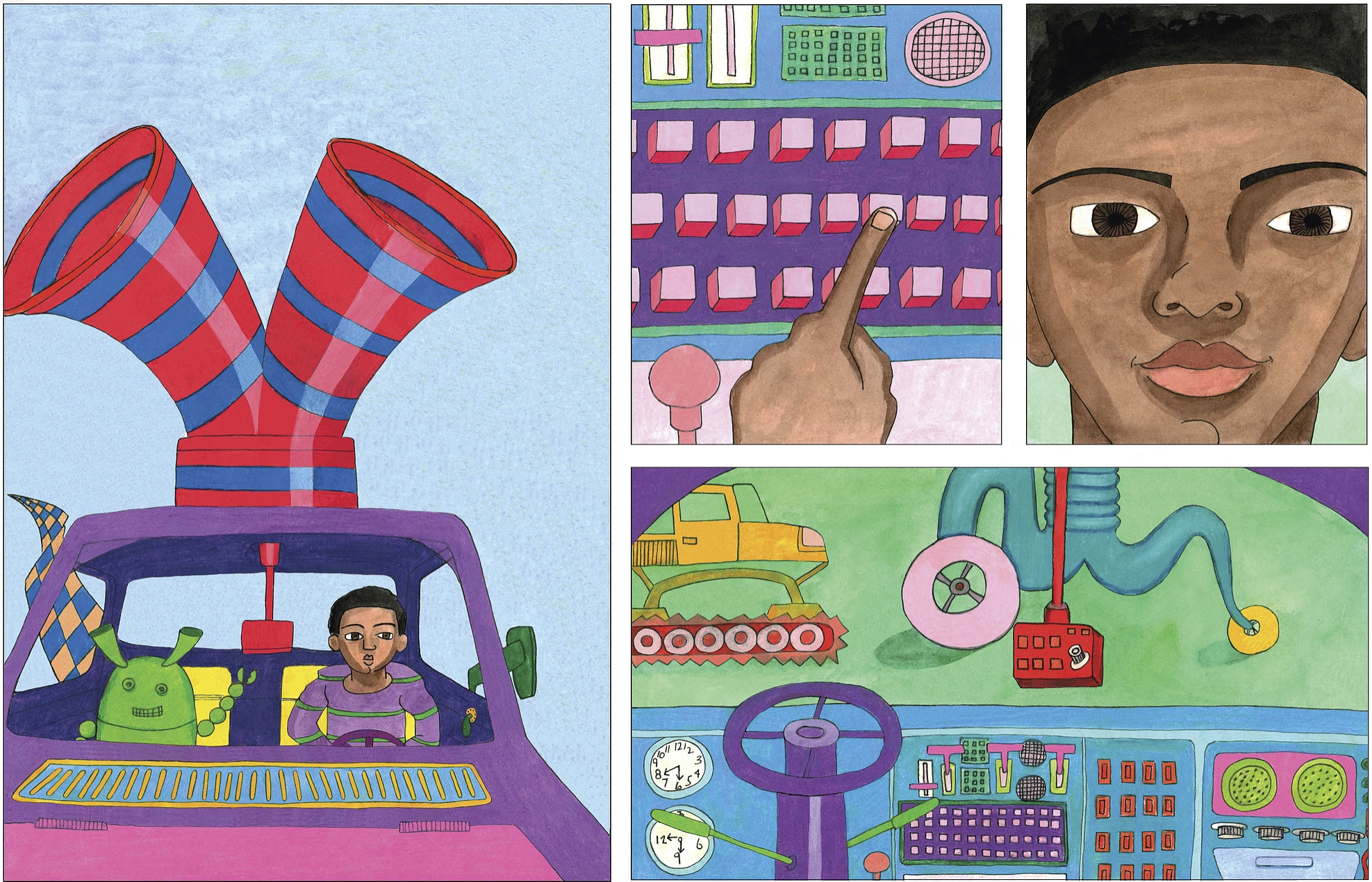 Verlena Johnson
“The Adventures of Kai and the Magical Machines”

Johnson’s long and varied career includes teaching stints at Columbia College in Chicago, The School of the Art Institute of Chicago, and Barat College, where she taught African American art history survey courses. She has also taught art classes at the community level. That classroom experience has served her well as an academic adviser to architecture and urban design students.

“One of the things that I say often to our students is to advocate for themselves and to build relationships with their professors and the faculty, because that is why they’re there,” Johnson said. “They’re there to convey the content of their discipline, but they’re also there, I think, to mentor them.

“I was a student who had to learn very young, as a first-generation college student, how to advocate for myself and how to access different resources on campus.”

Johnson says she’s hopeful that ongoing conversations about diversity and inclusion at the school and departmental level — including admissions, fundraising and curriculum — will make UCLA a more welcoming place for students from underrepresented communities.

“It really excites me to think about how leadership within the school have committed themselves to these efforts, and I have hope that they’ll continue,” she said.

Johnson is also looking forward to seeing institutional investments in greater representation among students, faculty and staff, and in revamping curriculum to be less Eurocentric. Those measures, she says, will go a long way in fostering a more inclusive climate.

“We absolutely have to make sure that we’re doing everything in our power to make sure that those people who are from underrepresented groups feel included and welcomed and a part of their communities, because in my experiences, both as a student and as one who has advised students, oftentimes that’s not the case,” Johnson said.

“Sometimes we invite people to the table to dine with us, for example, but then we find they’re vegan and we don’t have any vegan cuisine.”