Wonne Ickx, a visiting lecturer in the UCLA Department of Architecture and Urban Design, and his Mexico City-based architecture firm, Productora received the Mies Crown Hall Americas Prize for Emerging Architecture (MCHAP.emerge). The award was given for “Pavilion on the Zocalo,” which represented Mexico City during the international Cultural Fair in 2014. Built in Mexico City's largest plaza — the Zocalo — the pavilion represented the migrations that have influenced the development of the city. 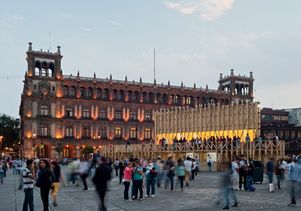 Pavilion on the Zocalo in Mexico City

MCHAP.emerge is a biennial prize for the best built work from an emerging architecture practice. The award includes the MCHAP Research Professorship in the College of Architecture at Illinois Institute of Technology in Chicago for the 2016/17 academic year, as well as funding of up to $25,000 in support of research and a publication related to the theme of “Rethinking Metropolis.”