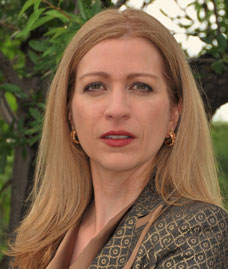 The University of California Board of Regents on May 12 approved Christine Gulbranson as senior vice president for research innovation and entrepreneurship at UC’s Office of the President.

In this newly created role that reports directly to UC President Janet Napolitano, Gulbranson will lead a team that will increase the innovation and entrepreneurial capabilities of the UC system. She will also be responsible for forging alliances in government, private and philanthropic sectors to create new opportunities for research and economic growth.

“Christine Gulbranson has a strong track record of forward-thinking leadership. Innovation is in her blood,” said Napolitano. “I’m confident her wide-ranging skills and experience will help further the university’s pioneering culture and positive impact.”

Gulbranson holds five degrees from UC Davis: a bachelor’s degree in physics; bachelor’s, master’s and doctoral degrees in chemical engineering and materials science; and an M.B.A. She has received multiple accolades for her work, including being recognized as “Innovator of the 21st Century” by MIT Technology Review and “40 Under 40” of Silicon Valley business leaders. She was also a judge on “The Big Brain Theory: Pure Genius,” the Discovery Channel’s engineering competition show, which aired globally in over 100 countries.

For more than a decade, Gulbranson has been the CEO of Christalis, a strategic advisory firm specializing in business development, technology transfer and funding assistance for high-tech clients. Bridging her skills as a scientist, engineer, entrepreneur and investor, Gulbranson has helped build national entities and brings a wealth of expertise across different industries to the senior vice president position.

“I have always been impressed with the University of California as one of the preeminent academic research institutions in the world,” Gulbranson said. “Its continued leadership in developing new investment vehicles along with promoting innovation and entrepreneurship excels on both a national and global platform.

“I’m elated to work with our 10 UC campuses, five medical centers and three national labs – along with the gamut of partners in various sectors – to enable and empower greater collaborations and translation of research and innovation in the marketplace.”

Gulbranson started her career at the UC Office of the President in 1997, where she was the director of research collaborations, providing leadership in the creation and evaluation of large-scale collaborations among universities, national laboratories and industries. She transferred to Lawrence Livermore National Laboratory in 1999, where she established an incubator to accelerate entrepreneurial business growth and technology commercialization.

Understanding the financing dynamics and growth of startups led Gulbranson in 2000 to Global Catalyst Partners, where she became a partner at the venture capital firm and invested in seed and early-stage companies focused on information technology and materials.

From 2007 to 2010, she was a senior fellow with the Ewing Marion Kauffman Foundation; there, she led the foundation’s clean technology initiatives and supported the development of commercial innovation at the university level.

Utilizing her strategic and executive operational skills, she helped launch Advanced Energy Economy in 2011, a national industry association. As the founding CEO of the Nevada Institute for Renewable Energy Commercialization, she was also an integral part of the first renewable energy accelerator in the U.S., a consortium of research institutions, investors, corporations and government.