Editor’s note: This story was updated April 8 to note that Fowler Museum at UCLA’s The Map and the Territory exhibition will be held at a later date.

What do a meteorite, a guitar made from an armadillo and an early map of the internet have in common? It sounds like a party game challenge. But these and many other rare objects from UCLA’s remarkable collections are cohabiting in a new exhibition at the Fowler Museum at UCLA. And their interconnections — mapped along the themes of cartography and placemaking — will delight you.

UCLA’s holdings include about 21 million objects from around the world, including books, manuscript archives, paintings, prints, sculptures, maps, films, musical instruments, scientific specimens and esoterica. Organized by the Fowler Museum in partnership with the Hammer Museum at UCLA, UCLA’s libraries and several other campus entities, The Map and the Territory: 100 Years of Collecting at UCLA presents a modern-day cabinet of wonders. Originally scheduled to open in April but now postponed to a later date, the exhibition spotlights the role of objects at the university and how collections add rich layers of meaning and culture, as well as adding history to UCLA’s pursuit of knowledge.

To help winnow down the selections to a manageable 100 to 150 objects, representatives from several campus units discussed the collections in their care. They were asked to “tell us what your collection is about — show us your most important object, show us your best object, show us the first object that came into your collection — as a way to get those kinds of conversations started,” says Matthew Robb, the Fowler Museum’s chief curator.

A myriad of themes emerged, but the dominant commonality was that the collections related to notions of maps, home and space — albeit in idiosyncratic ways. Visitors will see these ideas in three thematic sections — Borders and Boundaries, Home and the Built Environment, and The Beyond, which explores real and imagined places — and how UCLA’s collections connect us to these ideas.

An installation by artists Mercedes Dorame ’03 and River Garza is a highlight of the exhibition, referencing the university’s ongoing acknowledgment that the campus resides on what was historically the homeland of the indigenous Gabrielino/Tongva peoples. It reflects how UCLA’s leadership is working with indigenous communities on issues of repatriation and cultural heritage protection.

Dorame and Garza’s piece incorporates indigenous artifacts from the Fowler Museum’s vast archaeological collection; Dorame’s photographs from the Hammer; and yarn, cinnamon, salt and stonelike objects that Dorame has cast in concrete.

“I call them star stones, [but] the technical term is cogged stones,” Dorame explains. “They are found in our tribal area, and they are beautiful stones shaped like stars and moons and made out of different materials in somewhat varying sizes and shapes. But we’ve lost the context of what they were for. For me, it’s so important to highlight that discoloration of meaning, because it speaks to the depth of destruction caused by colonization to our culture.”

The work’s title hasn’t been finalized yet, but it will include “Tovaangar,” the Tongva name for the Los Angeles basin and South Channel Islands, home to the Tongva peoples. California recognized the Tongva peoples as an indigenous tribe in 1994, but they’re not federally recognized, so as a collective group they have limited access to federal funding and no designated reservation land.

“The process for federal recognition is that you have to have a continuous lineage — people want a straight line of a narrative,” Dorame says. “When you think about these incredible [cogged] stones — [which] are so intentional and so beautiful, and yet we don’t know what they were for — it speaks to the larger issues around what happened with settler colonialism and the influx of people from the south and then the east.”

Intriguing juxtapositions are the hallmark of this exhibition and are meant to inspire expansive thinking ... with objects that explore the realms of astrology, existentialism and the world beyond.

Like UCLA itself, this exhibition’s strength lies in its breadth and diversity. For example, during early curatorial discussions on migration, the word had different meanings for STEM (science, technology, engineering and math) collaborators than for those from the humanities.

“Migrations of forms, migrations of people — these were the kinds of things [that art museum and library people] were thinking about,” Robb says. “But, of course, our colleagues at the [UCLA Life Sciences’ Donald R.] Dickey Bird and Mammal Collection came right back to us and said, ‘We’ve got this sample of the arctic tern,’ which is this bird that migrates the globe. It goes from the South Pole to the North Pole. That was a really good example of the kind of creativity that everyone was bringing to the table.”

Thus, for a few months, a bird specimen from Alaska shares gallery space with vintage black-and-white photographs of U.S.-Mexico border crossings from UCLA Library Special Collections’ Los Angeles Times Photographic Archives and intricate model ships from the William Andrews Clark Memorial Library. Together, they beckon visitors to consider the many meanings and implications of migration.

Such intriguing juxtapositions are the hallmark of this exhibition and are meant to inspire expansive thinking. For example, a section with works and objects about home considers the idea in its many guises: personal, geographical, national and spiritual.

American artist Zarina, who was born in India, has a series of nine etchings on display, representing the different homes she has inhabited and tracing her peripatetic existence in Bangkok; New Delhi; Paris; Bonn, Germany; Tokyo; Los Angeles; Santa Cruz, Calif.; and New York, where she settled in the 1970s. The 1947 partition of India and her subsequent experiences living in different places have impacted her life and work.

“The idea of home is something Zarina examines as part of her artistic practice,” says Cynthia Burlingham, director of the UCLA Grunwald Center for the Graphic Arts and deputy director of curatorial affairs for the Hammer Museum.

Zarina’s etchings are displayed in a gallery with actual architectural plans, including the landscape design for Disneyland’s Fantasyland as well as models and floor plans by such noted Los Angeles architects as Lloyd Wright, Richard and Dion Neutra, and A. Quincy Jones. 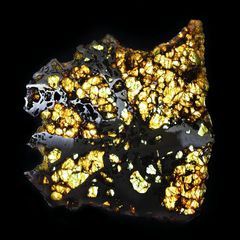 UCLA Meteorite Collection
An extremely rare stony-iron pallasite meteorite — part of a 1,664-pound mass — was found in Argentina in the last century. It is estimated to be 4.5 billion years old.

The final section — The Beyond — asks, “What is the expanse that you can perceive, and what happens when you try to cross that boundary?” Robb says. Space is explored through Star Trek scripts; a title-page proof of Ray Bradbury’s influential novel The Martian Chronicles; a UCLA flag that traveled on the space shuttle Discovery with astronaut Anna Lee Fisher ’71, M.D. ’76, M.S. ’87; and specimens from the UCLA Meteorite Collection. Of the latter, Robb says, “When you start thinking about the scale of those time periods and distances, it becomes an awe-inspiring thing.”

Indeed, the exhibition pushes even further, with objects that explore the realms of astrology, existentialism and the world beyond, including Baule figures from the Ivory Coast that represent nature spirits and spirit mates; a yard painting from Mexico; and a sequined, beaded ritual flag, or drapo, from Haiti.

“I was amazed by what I discovered working on this exhibition — the breadth of items gathered in collections [that] support our mission of teaching, learning and research,” says Heather Briston, UCLA Library’s university archivist and head of curators and collections. “This [exhibition] will spark some unexpected connections.”

Ultimately, The Map and the Territory exhibition mirrors the university: a place where students and everyone connected to the community are exposed to a magnificent multiplicity of ideas, people and objects, creating a sum far greater than its parts.