When walking around UCLA, you might not notice the array of unexpected delights scattered throughout campus. We spotlight a few of our favorites here, along with a map to help you find them. 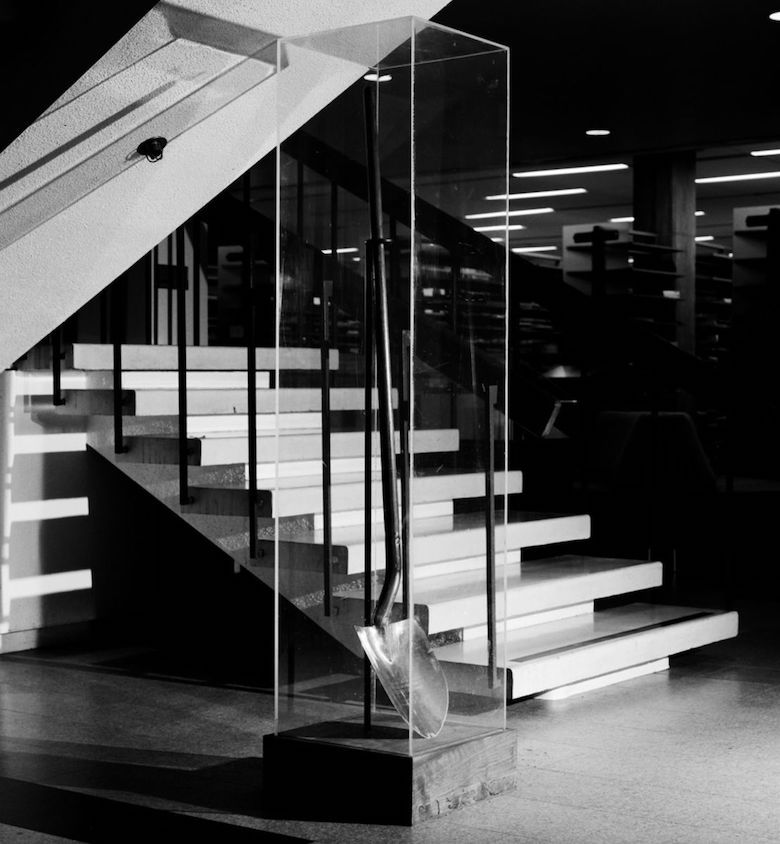 A - With This Shovel

Charles E. Young Research Library, Level A Part of the UCLA Library Special Collections, this shovel became a historic relic on Sept. 21, 1927, when UCLA Director Ernest C. Moore used it to turn the first piece of dirt on what would become the university’s future campus. That groundbreaking ceremony celebrated UCLA’s eventual move from Vermont Avenue to its Westwood location, which officially opened in 1929. — Cheryl Cheng ’02 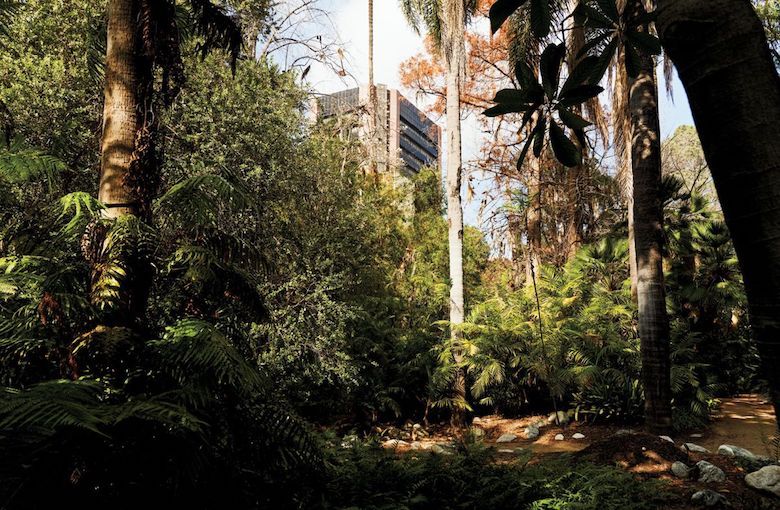 707 Tiverton Drive Find peace in the UCLA Mildred E. Mathias Botanical Garden, a 7.5-acre oasis that features exotic plant life, tranquil streams and 275-plus species of animals. Located in the southeastern corner of campus, the garden offers a maze of walking paths and benches — perfect for a midday break. You can join a birding walk, stroll alongside sunning turtles or sit under the large Ginkgo biloba tree at The Nest. — Michelle Reardon 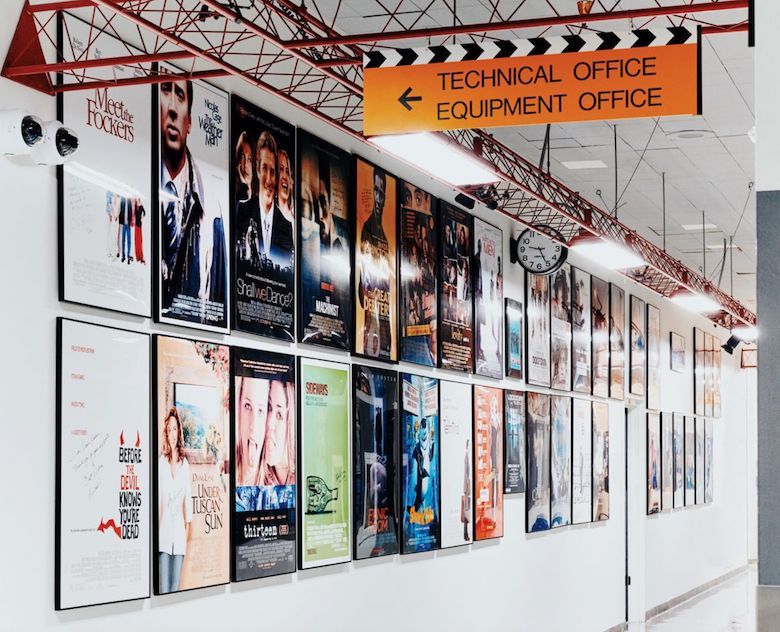 James Bridges Theater lobby When you step into the lobby of the James Bridges Theater, the collection of vintage movie posters will remind you of the Bruin presence in Hollywood. But that’s just the opening act. As you walk down the corridors — where UCLA School of Theater, Film and Television students are readying production equipment — the display continues. It makes you wonder which Bruin will be added next to the 2,000 Hollywood nominations and wins that UCLA has already accumulated. — Zane Cassidy 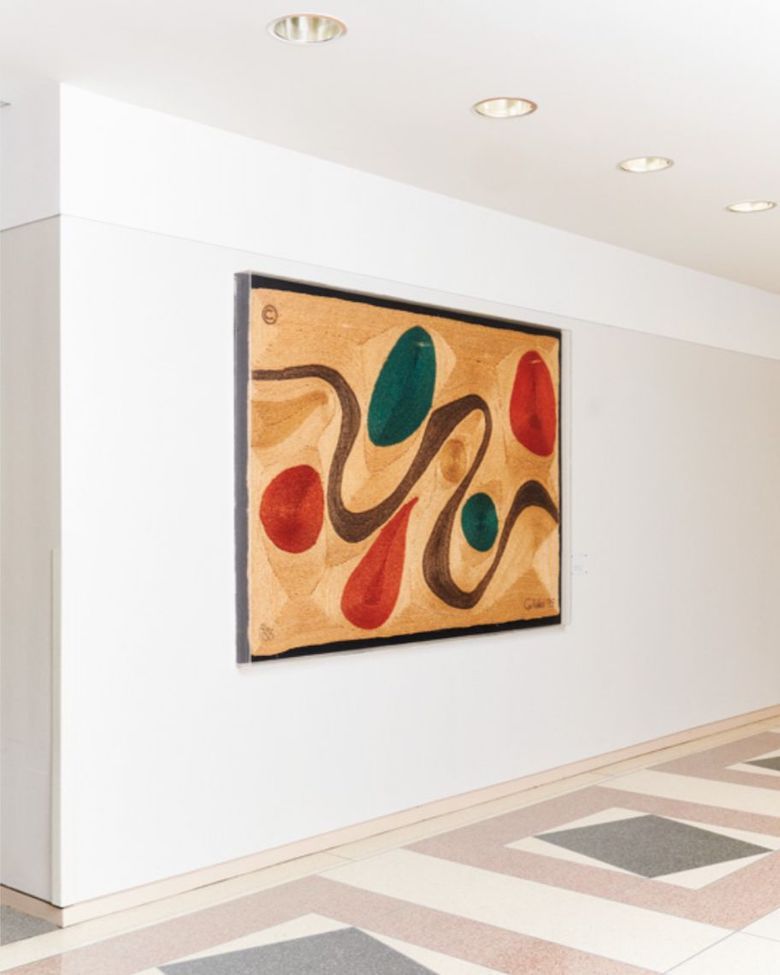 Eugene and Maxine Rosenfeld Management Library, UCLA Anderson School of Management Sculptor Alexander Calder designed tapestries that were handwoven by Mexican artisans. An acclaimed example of this is 1976’s #6 (aka Turquoise), which is hung among works by Robert Weingarten, Lita Albuquerque ’68 and Jane Gottlieb ’68. For the math-minded: The nearby square floor tiles are designed to represent the Pythagorean theorem. — John Harlow 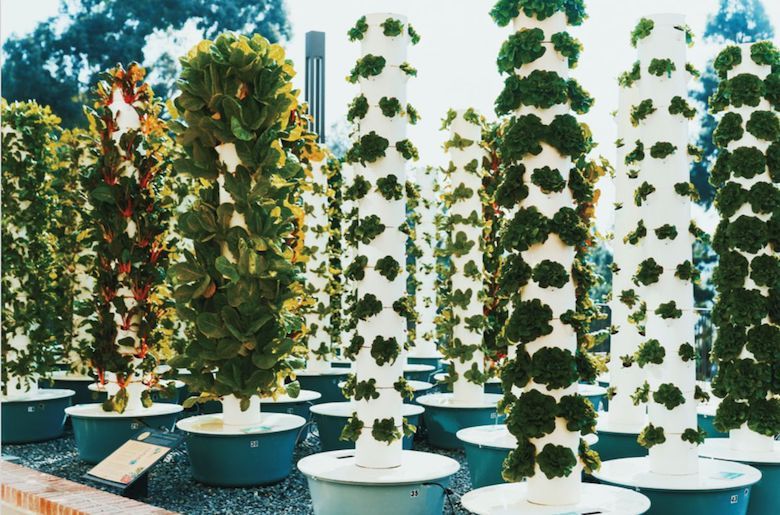 Sproul Landing “An edible green sea of tranquility” — that’s how UCLA Executive Chef Joseph Martin describes the 50 aeroponic Tower Gardens that grow everything from arugula to tomatoes. Planted in 2017 as a sustainable way to supply greens to the Bruin Plate dining hall, the plants are in such high demand that now they’re harvested only for Plateia at UCLA. “It’s a unique way of gardening — definitely the way of the future,” Martin says. — Peg Moline 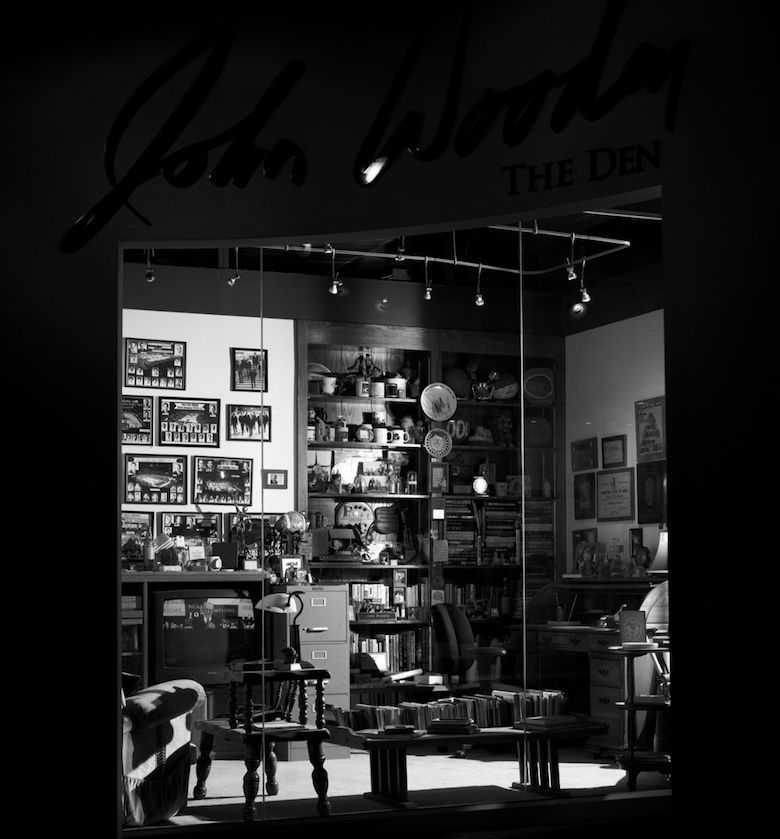 UCLA Athletic Hall of Fame Nine and a half feet by 14½ feet. That’s the size of the room where Coach John Wooden received guests in his Encino, Calif., condo until his death in 2010. Later that year, the UCLA Athletic Hall of Fame re-created his den. From bookshelves to plates decorated by Wooden’s grandchildren, the exhibit sustains the spirit of the Wizard of Westwood by sharing the things he loved. — Delan Bruce 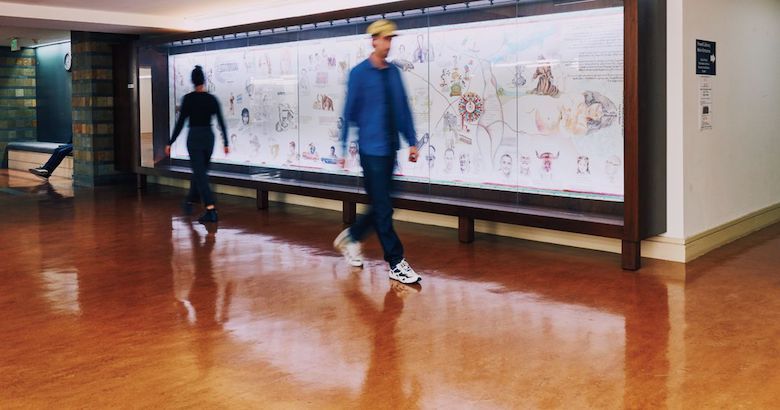 G - City in Mind: A Lyrical Map of the Concept of Los Angeles

Powell Library basement Imagine a hand-drawn map with the images and words of such noted Angelenos as Charles Bukowski and Fernando Valenzuela. Created by designer and cartographer J. Michael Walker in 2011, the 23-foot-long masterpiece features lyrics that jump off the page (Joni Mitchell’s “And her coat’s a secondhand one/ Trimmed with antique luxury/ She is a lady of the canyon”), and people are depicted where they hung out or lived. — P.M. 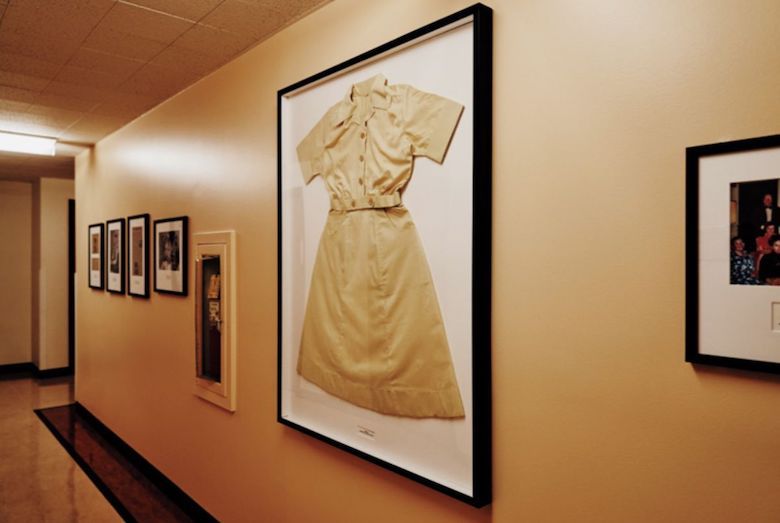 Factor Building — UCLA School of Nursing, third floor Can you start a revolution with seersucker? In 1950, the first dean of UCLA’s School of Nursing did just that. Lulu Wolf Hassenplug set out to increase respect for her nurses by updating their look. Out went the standard starched white uniforms, hosiery and — most controversially — caps. The inaugural class wore softer, more sensible seersucker. The next iteration featured golden, drip-dry Dacron; larger pockets for tools; and a roomier, more practical fit. — Jennifer Shaklan M.F.A. ’02 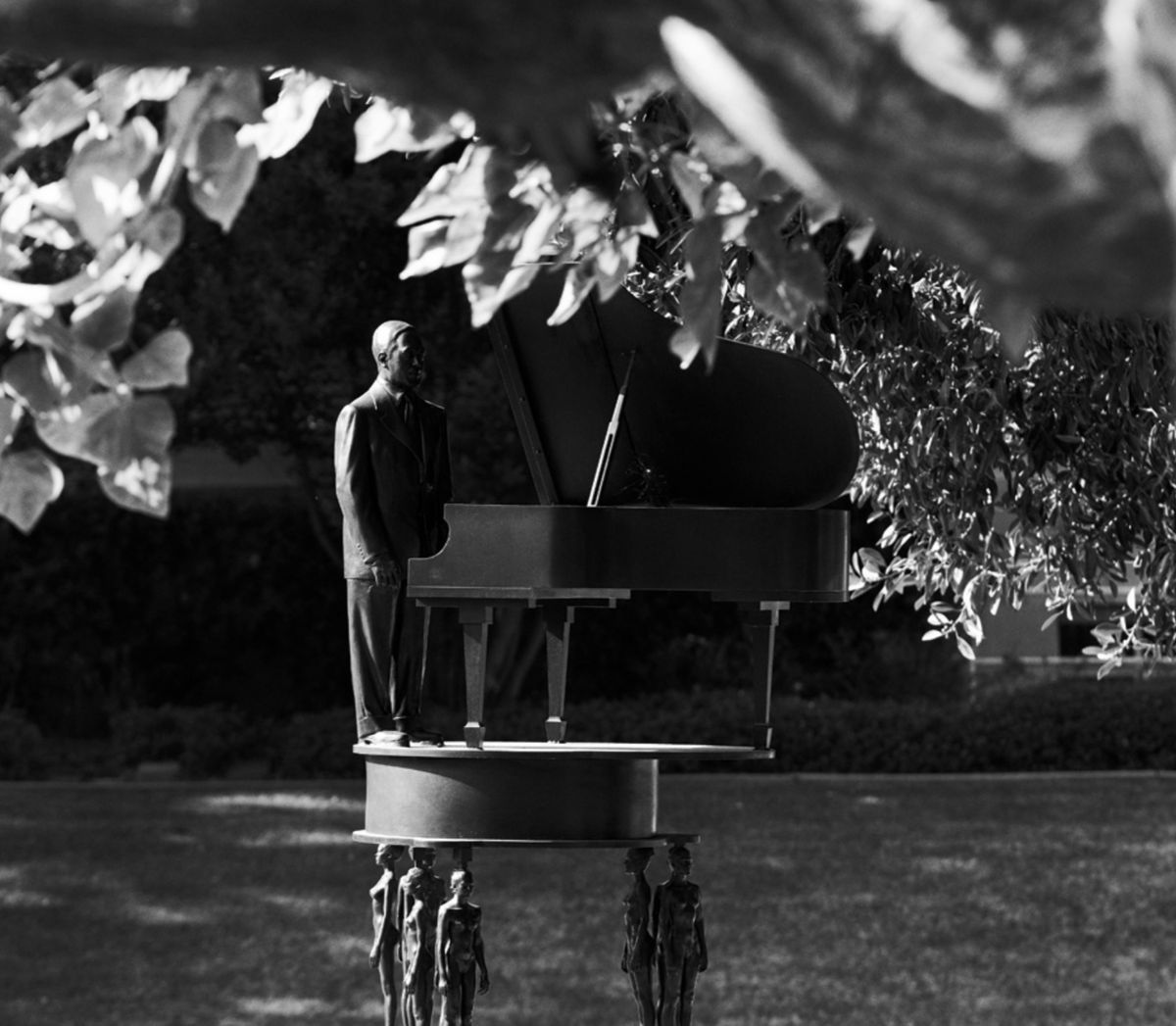 West of Schoenberg Music Building On Jan. 21, 1937, jazz genius Duke Ellington got lost on his way to perform at UCLA, ended up at another university and swiftly U-turned to play an unprecedented, free four-hour show at Royce Hall. L.A. sculptor Robert Graham’s 1988 Duke Ellington Memorial captures the musician and his piano, supported by nine Muses. — J.H. 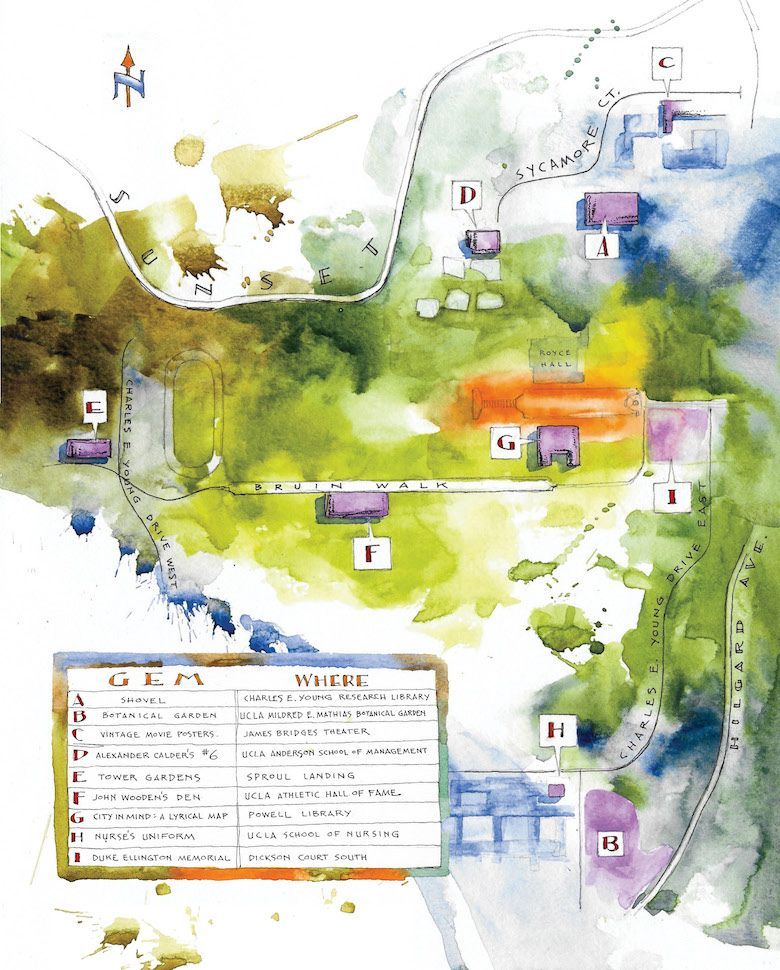