Along with football and turkey, there is one other enduring Thanksgiving tradition: the contrarian relative. Every family has one — the loose cannon whose loud opinions bring holiday dinner-table discussion to a screeching halt, everyone suddenly staring down into their mashed potatoes. You either engage, risking a heated exchange that only further mars the occasion, or roll your eyes and avoid contact, finding solace in the knowledge that it’s only once a year.

But now a more sobering thought: What if we’ve entered an age in which we encounter contrarian relatives, co-workers, even friends, on a daily basis?

Three years into an isolating pandemic, we’re struggling to reestablish everyday interactions at a particularly precarious moment. A poll released last summer by YouGov and The Economist found that an astounding 40% of Americans view a civil war as at least somewhat likely in the next decade. Even if you’re with the 60% who foresee a less dystopian future, there’s no questioning that these are politically supercharged times.

How did we get here? And how might we do better — tempering passion with compassion, refraining from viewing the “other side” as inherently wrong, or even evil, because they think differently than we do? Luckily, some brilliant UCLA minds are on the case.

Blame It on the Brain

Part of the problem may stem from our wiring. In a recently released report that analyzed more than 400 previous studies on the topic, UCLA psychology professor Matthew Lieberman found that a region of the brain he labels the “gestalt cortex” helps us make sense of ambiguous or incomplete information — and dismiss alternative interpretations. It can lead us to mistake our subjective understanding of people and events as objective truth. “We tend to have irrational confidence in our own experiences of the world,” he says, “and to see others as misinformed, lazy, unreasonable or biased when they fail to see the world the way we do.”

Sonja Diaz M.P.P. ’10, director of the UCLA Latino Policy and Politics Institute, points to massive changes in the way information is shared and absorbed, boosted by technology. “People used to go to libraries, read the newspaper in hard copy and talk on the telephone,” she says. “What we have now is a mix of nefarious interests, whether moneyed or foreign governments, that are shaping the narrative around truth and governance.” The result is that what were once respectable political disagreements are now fierce clashes over basic facts. “The speed at which we communicate has transformed how we get content — and with no regulation of social media, that content is unchecked,” Diaz says. These channels “are able to convince not just one person, but thousands or millions of people, to believe something is factually incorrect.”

In popular media, Diaz adds, the narrative is almost always framed as “us versus them,” which fails to reflect the country’s complex diversity. “Because of misinformation, disinformation and malinformation, the story is essentially the entitled versus those who are receiving entitlements, and the racial-social constructs put so many communities at a disadvantage when it comes to finding common ground,” she says.

How Did We Get Here?

Every week from July 2019 through February 2021, a UCLA research team led by political scientists Lynn Vavreck and Chris Tausanovitch interviewed 6,000 people in an effort to capture the dynamics of public opinion during the presidential campaign. Yet, through seismic events — a pandemic, an economic crisis, an unusual and closely contested race for the White House — attitudes remained largely unmoved.

In their new book The Bitter End: The 2020 Presidential Campaign and the Challenge to American Democracy, Vavreck and her co-authors argue that this “calcification” of American politics is the byproduct of four key developments. The first two have unfolded over several decades: growing ideological distance between the two major parties, and homogeneity within those parties. The third and fourth are more recent. The third development is that unlike past conflicts over issues such as taxes or the role and size of government, today’s biggest political issues tend to be much more personal: immigration, abortion, gender, race, ethnicity, religion. “These [issues] will naturally be more divisive because they’re about rights, equality and what it means to be an American,” Vavreck says. 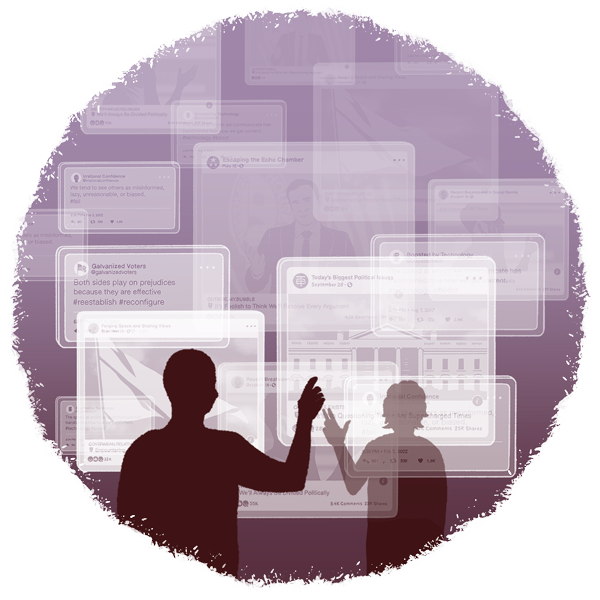 Add to all of that is the fourth development — the unusual degree of partisan parity in the electorate, which compels the parties to dig in rather than reassess their positions upon defeat. “When you combine these four factors,” Vavreck concludes, “the stakes are very high, because the ‘other side’ is so ‘different’ from us, we’re fighting over identity-inflected issues, and victory is always just within reach.”

“We’ll always be divided politically,” observes Efrén Pérez, a professor of political science and psychology who directs the UCLA Race, Ethnicity, Politics and Society (REPS) Lab. What’s new, he says, is the more recent breakdown of social norms around our disagreements — which ultimately paved the way for the January 6, 2021 attack on the U.S. Capitol. “Political debate used to have gravitas,” Pérez says. “Now it’s shouting matches, zingers and sounding like you’re right rather than getting to the right solution.”

Pérez notes that in their efforts to galvanize voters, political parties seek to demonize groups for causing society’s ills. “Both sides play on these prejudices, because it’s effective,” he says. “When non-Hispanic whites say, ‘This isn’t the country I used to know,’ no kidding — we’re getting much more diverse. The message that they’re losing their place in society because of systems rigged against them isn’t accurate, but it just has to feel like it is.”

The good news, as Pérez sees it: “Norms can be reestablished and reconfigured. We should not only be treating individual people the way we’d want to be treated, but treating other groups that way. When you express your opinion, who are you? And is that who you want to be?”

So What’s the Solution Here?

UCLA neuroscientist Marco Iacoboni agrees that as a society we’re facing an empathy crisis. “Empathy is what connects us,” says Iacoboni, who directs the Ahmanson-Lovelace Brain Mapping Center’s Neuromodulation Lab. “You can’t have a society without an understanding of the opinions, beliefs and desires of other people.”

Iacoboni’s neuroimaging studies are helping to illuminate the brain mechanisms involved in generating empathy. Mirror neurons are cells that activate when we feel an emotion or perform an action, as well as when we watch someone else exhibiting that emotion or performing the action; these cells are what prompt us to wince when we see another person in pain, for example. But other cells, more closely tied to rational responses, also contribute to practical behaviors. If we are overwhelmed by emotional empathy, we can’t help. Cognitive empathy allows us to turn off the emotional controls long enough to assist.

So, Iacoboni suggests, if we’re offended by another person’s point of view, cognitive empathy can redirect that animosity and allow us to engage in more productive dialogue. “Having a real conversation with someone who thinks differently, where you try to understand each other’s point of view, will make you more compassionate,” he says.

That said, empathy levels drop dramatically once we’re outside our social group. But what if we considered our social group to be all of humankind? “We can connect with anyone on basic things like food and family,” Iacoboni says. “If we start by talking about what we share, by the time we get to what divides us, we’re in a better disposition to understand another point of view.”

That also means escaping the echo chamber, where your own beliefs are constantly reflected back to you and reinforced, and never thoughtfully challenged.

No one can accuse Jorja Leap of failing to get outside her bubble. An anthropologist and social worker who heads the Social Justice Partnership at the Luskin School of Public Affairs, Leap works with current and former gang members, with part of her work assisting those in the prison system who are preparing to reenter society. Her husband, Mark, is a retired Los Angeles police officer who served as deputy chief in charge of counterterrorism for the city. “Nothing could be more bizarre,” Jorja Leap says of the couple’s disparate perspectives, laughing. “It’s made for stormy times in our relationship.”

It’s also forced the forging of space where they can share their views, listen and learn. Leap says she and her husband learned to argue through their differences of opinion to get to the other side. She laments the human tendency to avoid conflict by retreating to like-minded circles. “It’s foolish to think we’ll resolve every disagreement,” she says. “But we need to be in dialogue, and that means escaping the echo chamber.”

When encountering people from different backgrounds, Leap thinks of herself as a student. “I’m labeled a gang expert, but I never accept that,” she says. “I profoundly believe I can learn from everyone.”

As for fraught encounters with contrarian relatives and their ilk, Sonja Diaz offers this basic advice: “You can’t change anybody, but you can change the way you interact.” Diaz believes we should take to heart our collective trauma over the last few years — a once-in-a-century pandemic in an era when access to quality mental health services is in short supply. “People are on edge,” she says. “What comes to mind is giving grace — grace for yourself by creating healthy barriers and limitations to when you interact, and then when you choose to do so, being mindful of the land mines that exist.”