The green bike lanes on Charles E. Young Drive. The automated bike counter near Strathmore Drive. Bike ramps on stairways. The Bike Shop in the Wooden Center. The racks of blue Bike Share bicycles. These are just a few of the reasons why UCLA received a silver-level bike-friendly university designation from the League of American Bicyclists in 2015, a four-year honor it’s looking to upgrade to gold this year. Where did it all begin? Back in 2006, with the inception of UCLA’s Bicycle Master Plan.

UCLA’s silver status came as no surprise to Daniel M.T. Fessler, professor of anthropology and director of the UCLA Center for Behavior, Evolution & Culture. Navigating Los Angeles traffic to and from campus via bicycle has been a daily routine for him since 1998. While fellow Bruins grumble about their traffic-congested commute, Fessler feels, well, invigorated when he gets to work. “I bike because it’s a blast,” he says. “I’m always in a good mood and full of energy after my ride.”

And over the years, the biking terrain has changed — for the better. Enter UCLA’s Bicycle Master Plan.

The Beginnings of Better Cycling

In 2006, the Bicycle Master Plan surveyed campus needs. “We had a few bike racks on campus, and basically nothing else,” says Renee Fortier, UCLA’s executive director of Events and Transportation. “No designated pathways, no arrows. ... Nothing other than a few wheel-bending, old bike racks.”

Starting from zero, the Bicycle Master Plan has seen the campus, and beyond, evolve over the years. It’s something Fessler has definitely noticed during his daily commutes. “UCLA has made significant changes that substantially improve the convenience and safety of biking to campus, including bike lanes, lane-share arrows and tool stations,” he says. Since then, others have joined Fessler in using that mode of transportation. At present, UCLA has 3,000 cyclists, with an additional 1,000 who use the rental bikes around campus.

Fast-forward to 2019, and this ongoing endeavor has added 3 miles of bike lanes to campus. Currently underway is the designation of a bike lane on Westwood Boulevard, between Charles E. Young and Strathmore drives.

Going hand in hand with these additions has been a speed limit reduction for cars. “It was 35 miles per hour in 2006, with some people driving 50 miles per hour,” Fortier says of the Westwood area. For the UCLA campus, the speed limit changed from 25 mph to 20 mph in 2017 — a change highlighted by the “20 Is Plenty” campaign.

Another issue that was addressed was parking. “Bicycle parking spaces were outdated and hard to use,” Fortier recalls. The campus now has more than 3,000 spaces with updated racks. Additionally, a smart bike locker system provides secure parking at five strategic campus locations. Plus, there are self-service bike repair stations on campus.

There also was a need for cyclists to freshen up after a sweaty commute. This was addressed through a partnership with the Recreation Department, which now grants shower and gym locker accessibility to cyclists. This partnership also led to the launch of bicycle safety and defensive classes. “Some cyclists have received pricey moving violations for running stop signs or red lights,” Fortier says. “So we implemented a bicycle citation diversion program.” The program offers an online bicycle traffic school course.

For car commuters envious of cyclists zipping past them in traffic, the Earn-a-Bike program was created in 2016. The upshot — UCLA employees and graduate students who give up their car parking permit for two years are rewarded with a free bicycle, helmet, lock and lights. David Karwaski, UCLA’s director of Mobility Planning and Traffic Systems, says several hundred Bruins have taken advantage of the program.

Cycling wannabes can also get a free bike through UCLA’s annual Bike (Re)Cycling Day. “We round up bikes [that were] abandoned on campus and store them for a year,” Fortier explains. “Then [we] invite the community to come and get a bike, or parts, for free.” 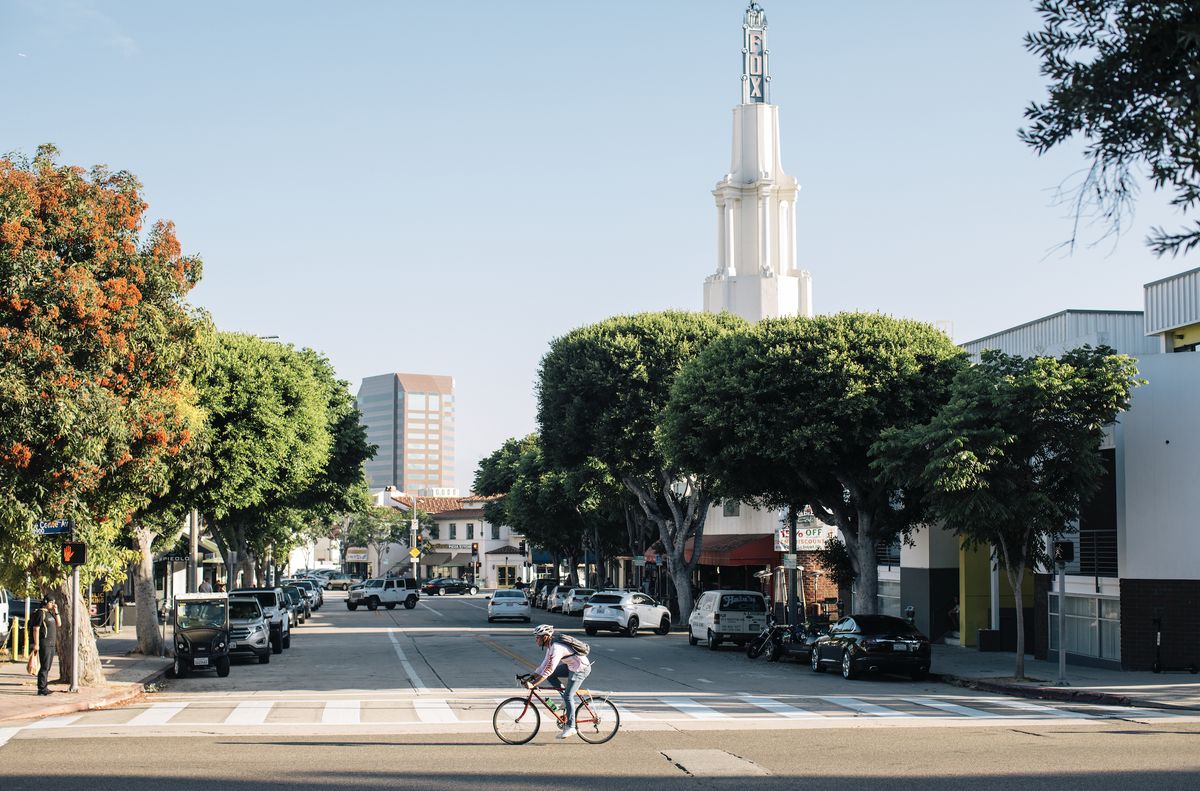 For people who don’t own a bike, the Bruin Bike Share program, launched in 2017, has 130 bikes on campus that can be rented by the day, month or year. Bikes can be dropped off at several hubs around campus or locked at public bike racks.

Karwaski says bike sharing solves the “last mile” problem. “It makes sense for people getting off buses, or who have to park some distance away from their offices or classes, to have these rental options for that last mile issue,” he says.

A last mile team is keeping an eye on the progress of the Metro’s Purple Line station, which will be located at Wilshire and Westwood boulevards. The team is currently in discussions with LA Metro about potential funding for projects that will benefit cyclists and pedestrians.

The Arrival of Scooters and E-Bikes

“It’s both good and bad,” Karwaski says of the dockless micromobility vehicles that have arrived on campus. Bike Share was impacted by these scooters and electric bicycles, which helped to reduce ridership by 20%.

A conundrum coming into play was where electric options belonged — the sidewalk or the street? Among those at risk for injury were pedestrians. It was decided that the best place for scooters is in a bike lane. “This enabled us to more quickly implement some of our bike lanes, benefitting cyclists,” Karwaski says.

Fessler still sees safety issues with dockless micromobility vehicles: “Almost without exception, users of these vehicles never wear a helmet.” He’d like for helmet use to increase. Currently, around 45% of UCLA cyclists wear a helmet.

Despite myriad improvements over the years — Fessler remarks that the progress has been fantastic — the Bicycle Master Plan still has some obstacles. “Work remains to be done,” he says, “including adding a demarcated pathway between the Structure 4 intersection and the loading bay south of Structure 5. Equally important is enhancing efforts to educate the campus community about cycling.”

Fortier says, “What’s been challenging is getting the surrounding municipality to improve routes to campus.” She gives Santa Monica high marks for increasing the number of dedicated, protected bike lanes — most recently paths connecting Ronald Reagan UCLA Medical Center to UCLA Medical Center, Santa Monica — but she says L.A. has been slow to address advancement requests.

“The number one identified issue of why people didn’t bicycle before the 2006 Bicycle Master Plan was the lack of adequate facilities around campus,” Karwaski says. “Today, that remains the primary challenge.”

Over the years, Fessler has seen a positive change in attitudes. “Following some tragic incidents and a concerted campaign by the city of Los Angeles, there’s been a noticeable decrease in hostility toward cyclists by drivers,” he says. “It’s important for cyclists, e-scooter riders and others who share the road with automobiles to ride in a safe, predictable and respectful manner in order to preserve and enhance the progress that’s been made in public attitudes.”

When there was a perceived change to Westwood’s bike lane — what appeared to be removable bollards and no green surface — some speculated it was to suit film rentals. Not so, Fortier says. Instead, in agreement with campus architects, bike lanes were painted green only at the beginning of the lanes and at potential vehicle conflict points. “You don’t necessarily have to have the entire bike lane paved green,” Fortier says. “That’s actually rather expensive to upkeep.”

Karwaski adds, “The lack of green on Westwood was an aesthetic choice we made some years ago. We’ve since moved to using more green paint that’s approved to spec treat bike lanes.” And those bollards? “They’re not removable,” he says. “They provide vertical separation” between people on bikes or scooters and cars.

Relationships and partnerships have strengthened with time, too. “We’ve made amazing progress, from programs with the UCLA Recreation and Police departments to Facilities Management department crews making changes to the streets and built environment,” Karwaski says. “And the [UCLA Fielding] School of Public Health has helped us with studies of cyclists and their health improvement.”

He continues, “We’re hoping to have more partnerships with joining municipalities in the future, so the UCLA Bicycle Master Plan spreads outward from UCLA to have a better network approaching the campus.”

Daily commuter Fessler applauds the many milestones that UCLA’s Bicycle Master Plan has achieved. It has “made cycling safer and more pleasant,” he says, “thus, hopefully increasing the number of people willing to use this efficient, environmentally friendly, health-promoting and darn fun means of transportation.”

Editor’s note: UCLA has been upgraded from a silver-rated to gold-rated Bicycle Friendly University by the League of American Bicyclists.

CicLAvia: Heart of L.A. Takes Cyclists Back to UCLA’s Origins

UCLA will return to its roots for the centennial celebration CicLAvia: Heart of L.A., Celebrating 100 Years of UCLA, which will take place on Oct. 6. The cycling event will cover several areas of Los Angeles, including MacArthur Park, Chinatown, Little Tokyo, Boyle Heights and Downtown L.A. — the site of UCLA’s origins.

“The UCLA we love and know today first began as a teachers college in the heart of L.A.,” says Andres Cuervo, director of the UCLA Centennial Celebration. The Los Angeles State Normal School — located where the Central Library now stands (630 W. Fifth St.) — became UCLA in 1926, and by 1929, classes were taught at the Westwood campus. “UCLA has a shared destiny — and a 100-year relationship — with the city, so we’re excited to commemorate our beginnings, present and future with Los Angeles.”

Romel Pascual ’91, CicLAvia’s executive director, couldn’t be more thrilled about partnering with UCLA for the ride — especially since he’s a Bruin. “As a kid, I didn’t think it was possible to attend a top-tier school, then I was accepted to UCLA,” he recalls. “For me, it was the start of believing in the possibility that things can happen.”

Pascual believes CicLAvia is an extension of this feeling — the event introduces a new way to use L.A.’s car- dominated streets, just long enough for pedestrians and those on non-motorized vehicles to truly take in the iconic city. “It changes the way people look at their city. When these two institutions [UCLA and CicLAvia] come together with shared values and outcomes, you realize ... anything’s possible.”

Indeed, CicLAvia: Heart of L.A.’s 6.5-mile route will transform the city into a public park from 9 a.m. to 4 p.m. There isn’t a starting point or finish line, so participants can leisurely soak in beloved landmarks, including the Broadway-Spring Arcade, the Bradbury Building and Mandarin Plaza. The event, Pascual says, “makes you reimagine what the possibilities are of a city you love.”

Tens of thousands of participants are expected to attend this free event. Since 2010, more than 1.6 million people have attended a CicLAvia event.

CicLAvia is open to all forms of people-powered, non-motorized transport. Powered scooters, e-bikes and hoverboards are not allowed. Participants who require pedal-assist bikes due to medical issues are welcome.

“Our partnership with CicLAvia will bring UCLA closer to Angelenos and the communities we serve,” Cuervo says. “It’s also an opportunity to commemorate [UCLA’s] beginnings in downtown [L.A.] and celebrate our shared destiny with Los Angeles.” — B.W.

For more information, go to ciclavia.org.