For archaeologists and historians interested in the ancient politics, religion and language of the Indian subcontinent, two UCLA professors and their student researchers have creatively pinpointed sites that are likely to yield valuable transcriptions of the proclamations of Ashoka, the Buddhist king of northern India’s Mauryan Dynasty who ruled from 304 B.C. to 232 B.C.

In a study published this week in Current Science, archaeologist Monica Smith and geographer Thomas Gillespie identified 121 possible locations of what are known as Ashoka’s “edicts.”

First they isolated shared features of 29 known locations of Ashokan edicts, which were found carved into natural rock formations in India, Pakistan and Afghanistan. They then harnessed species-distribution modeling tactics — which includes examining sophisticated geographic information systems datasets along with Google Earth images — to overlay those unique characteristics against a geological and population map of ancient India. They believe they have identified locations that hold the same characteristics as proven sites and are significantly accurate markers for future discovery.

Predictive modeling can be a powerful new tool for scholars and researchers, Smith said. The known edicts and other archaeological discoveries have previously come about through random discovery or comprehensive surveys of whole regions.

“With the realities of looking for artifacts on a continental scale, we need more effective tools, and a search mechanism like predictive modeling is a high-priority development,” said Smith, emphasizing that many nations are facing the challenge of balancing preservation with much-needed development.

The Ashoka monuments in particular are of huge importance, especially in India, Smith said. They constitute the earliest known writings in the region. The national symbol of the modern nation of India is a sculpture that dates to the time of King Ashoka. 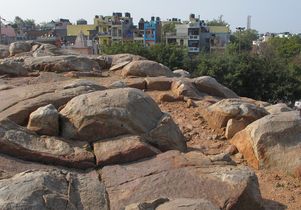 Ashoka’s edicts are also considered to be internationally significant as evidence of the power of an ancient political regime and as tangible expressions of religious practices related to Buddhism.

An excerpt of Ashoka’s edicts from Romila Thapar’s “Ashoka and the Decline of the Mauryas."

Smith’s fieldwork has long taken place on the Indian subcontinent. For this study, and with the support of a transdisciplinary seed grant from the UCLA Office of the Vice Chancellor for Research, she partnered with Gillespie, whose expertise lies in determining the presence or absence of ecological and biological species in a given geography, with a special focus on the plants and trees native to Hawaii.

Gillespie, who has also visited India, said the project captured his imagination.

Gillespie and his team of UCLA doctoral candidates combed through data and images to check off a list of environmental consistencies in the known edict sites. Three factors in particular helped provide a reliable prediction of where more might be found — the specific kind of rock the text is carved in, the estimated population density of the area in A.D. 200-300 and the slope of the rock bearing the text.

“The models really give a high probability of occurrence in the sites we identified,” Gillespie said. “Looking at the data of the existing sites, their placement certainly appears to be non-random. The scribes tasked with carving these edicts really seemed to think about the geology of the chosen space, the towns that were nearby, even the low level of the rock face they carved upon.”

Gillespie and Smith hope that their predictive model will allow local students or teachers in India and Pakistan and Afghanistan to make the next discovery of Ashokan edicts.