The Fowler Museum at UCLA will present the first major exhibition in the United States to examine the visual arts of Austronesian-speaking peoples comparatively in a single project — from their prehistoric origins in what is now Taiwan through their successive seafaring migrations over millennia to the Philippines, Indonesia, the Pacific and beyond.

The 200 rare and diverse objects on view in “Art of the Austronesians: The Legacy of Indo-Pacific Voyaging” are the products of the descendants of these migrants and the cultures they created in their new homelands. While most of these artworks were produced within the last two centuries and reflect a variety of accumulated influences, recurring themes evidenced in the works serve to highlight common features of the Austronesian heritage. The exhibition will open April 24 and conclude August 28.

The Austronesian (Austro=southern, nesia=islands) language family includes more than 1,200 languages. Using sailing vessels in prehistoric times, the ancestors of the speakers of these languages spread throughout a region spanning more than halfway around the globe. Who were they and where did they come from?

The prevailing theory, based on evidence from archaeology and linguistics, is that an identifiable culture belonging to proto-Austronesian peoples first developed in Taiwan about 5,000 years ago. By 3,300 years ago, successive generations gradually occupied new homelands throughout the Philippines and Indonesia and sailed eastward into the Pacific as far as the Solomon Islands. Subsequent migrations carried them to Madagascar, Hawaii, New Zealand, and Easter Island more than 800 years ago.

Notable for the spectacular range of works, the exhibition includes everything from ancient ceramics to architectural features, carved ancestor figures, textiles, ritual objects, and contemporary expressions of spiritual practices. 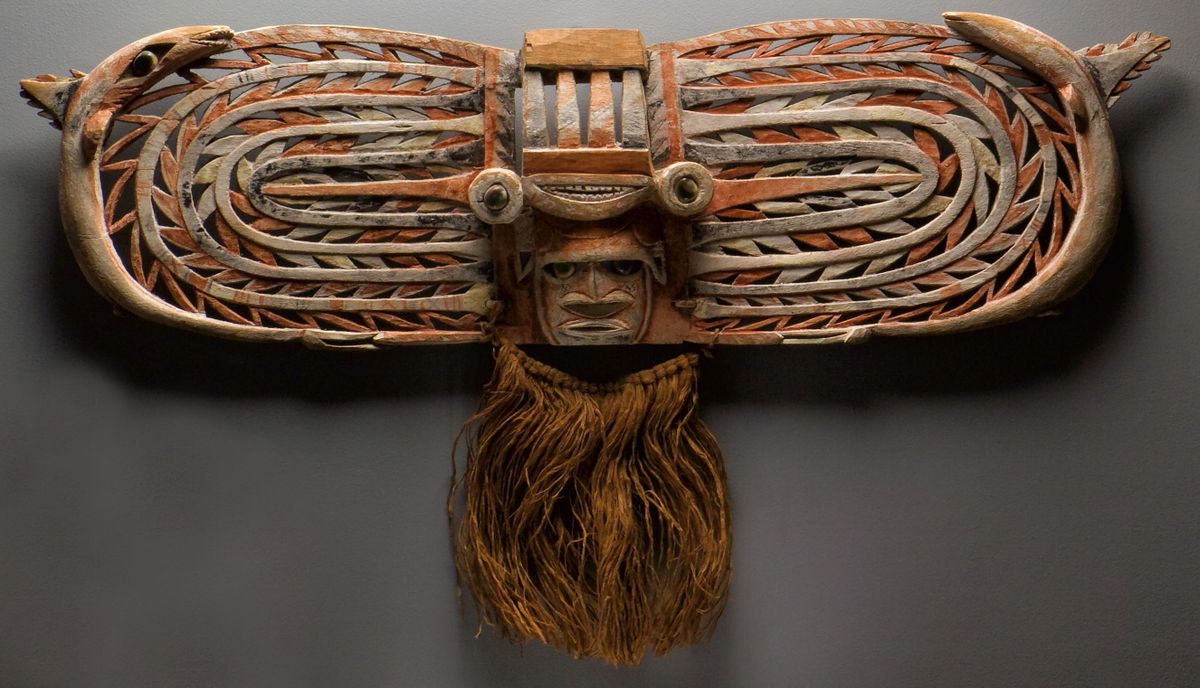 When Austronesian migrants established new communities in distant lands, their claim to authority was based on their heritage — thus a concern for ancestors is a recurring theme throughout the exhibition as exemplified in a magnificent pair of architectural panels from a chiefly house from the Paiwan peoples, indigenous inhabitants of Taiwan. Related to this concern with ancestors, a malagan ritual mask from the island of New Ireland in Papua New Guinea demonstrates the highly developed funerary practices in many Austronesian societies.

Imagery involving boats is another common theme for the descendants of seafaring migrants, spectacularly depicted in a huge ceremonial textile from the Lampung region of Sumatra. A protective figure from the prow of a Solomon Islands canoe captures the power of the spirits or deities that accompanied migrants on their dangerous voyages into unknown waters.

“Art of the Austronesians” explores additional themes, such as the common pairing of bird and reptile images and the development of highly specialized trading systems that fostered the exchange of valuables among trading partners sometimes separated by vast distances. The works on view represent a broad sampling of the cultures of Austronesian-speaking peoples, ranging from indigenous Taiwan to the Philippines, Indonesia, Vietnam, Papua New Guinea, the Solomon Islands, Micronesia, Vanuatu, New Caledonia, Fiji, Tonga, Samoa, the Austral Islands, Hawaii, Rapa Nui (Easter Island), Aotearoa (New Zealand) and Madagascar. Organized geographically, the exhibition design highlights cultural connections across these regions by including logos that identify shared themes and images in works throughout the installation.

The exhibition draws heavily on works from the Fowler Museum’s renowned Sir Henry Wellcome Collection, including many pieces on view to the public for the first time. Additional works borrowed from private collections in California contribute to the breadth of the installation with objects not normally accessible to the public. Together, these works offer visitors a rare glimpse into the cultures of the descendants of the Austronesian voyagers through their visual arts.

“Art of the Austronesians” is organized by the Fowler Museum at UCLA and curated by Roy W. Hamilton, Senior Curator of Asian & Pacific Collections. Major funding for the exhibition is provided by the Shirley and Ralph Shapiro Fund and the Ethnic Arts Council of Los Angeles. Additional support is provided by Ned and Mina Smith, Martha and Avrum Bluming, Edmond Chin, and Thomas Murray. The symposium has been funded in part by Thomas Murray who has generously matched individual gifts made by Edmond Chin, the Ethnic Arts Council of Los Angeles, Don Bierlich, the Fowler Textile Council, Marc Franklin, Greg and Mechas Grinnell, Michael Hamson, Mark A. Johnson Tribal Art, Carolyn and Charles Knobler, Textile Museum Associates of Southern California, Chuck Thurow, Janis and Bill Wetsman, and Insulinde Indonesian Arts - Frank R. Wiggers .

The Fowler Museum at UCLA is one of the country’s most respected institutions devoted to exploring the arts and cultures of Africa, Asia and the Pacific, and the Americas. The Fowler is open Wednesdays through Sundays from noon to 5 p.m. and on Thursdays from noon until 8 p.m. The museum is closed Mondays and Tuesdays. The Fowler Museum, part of UCLA Arts, is located in the north part of the UCLA campus. Admission is free. Parking is available for a maximum of $12 in Lot 4. For more information, the public may call (310) 825-4361 or visit fowler.ucla.edu.

Art of the Austronesians: The Legacy of Indo-Pacific Voyaging
10 a.m. to 5 p.m.
Saturday, April 23, 2016
Lenart Auditorium in the Fowler Museum

In conjunction with the exhibition “Art of the Austronesians,” this symposium features scholars whose current research reveals new insights on Austronesian archaeology, arts and history. The symposium is followed by a celebratory reception in honor of Fowler senior curator Roy Hamilton on the occasion of his retirement from UCLA and an exhibition preview from 5 p.m. to 8 p.m. Program schedule and registration.