Amid cheers and tears of happiness, the centennial class of UCLA celebrated both its graduation and the 100 years of UCLA’s existence at today’s commencement ceremonies, embracing the message that extraordinary changes don’t happen inevitably, but because people like this year’s graduates fight for it.

About 6,000 seniors were expected at the UCLA College commencement ceremonies in Pauley Pavilion at 2 p.m. and 7 p.m., joined by more than 20,000 friends, family members and guests. At dozens of ceremonies across campus this graduation season, UCLA awarded roughly 8,400 undergraduate degrees and 5,000 graduate degrees, including just over 600 Ph.D.s. 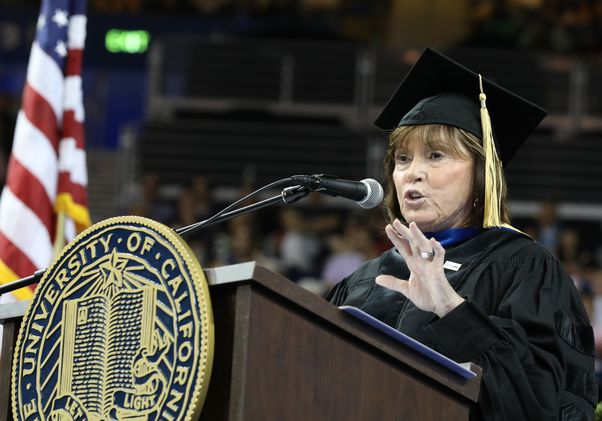 This year’s UCLA College graduates include students like Haya Kaliounji, a Syrian immigrant whose organization, Rise Again, has helped more than 40 Syrian amputees get prosthetic limbs, and Helen and Rachel Lee, first-generation college students and twins who are working with state legislators to repeal the sales tax on menstrual products.

In its first 100 years, UCLA has become the most applied-to university in the country and is often ranked as the nation’s No. 1 public university. Bruins have earned 13 Nobel Prizes and three Pulitzers. Roughly a third of UCLA undergraduates are first-generation college students, and a similar number come from low-income families.

For the first time, the commencement program included an acknowledgment of the Tongva people as the original inhabitants of the Los Angeles basin. In his address, UCLA Chancellor Gene Block reminded the audience that students led or aided many positive changes – like the creation of UCLA’s prestigious ethnic studies centers, or programs to support students who are veterans, undocumented, transfers, parents or foster youth.

While UCLA can still improve, it has made dramatic changes for the better since 1919, Block said.

“We better embody the aspirations of all our members, and we are a lot more diverse -- we represent a much more diverse and interesting family than we did when we started,” Block said. “All that has changed on this campus hasn’t changed by accident. It’s changed because of students, faculty and staff, alumni and others like you, who said ‘UCLA can do better.’”

Astronaut and three-time UCLA alumna Anna Lee Fisher delivered the keynote address at both ceremonies, telling students that her path to success was neither smooth nor guaranteed, but the result of perseverance in the face of setbacks, learning from mistakes, and back-up plans.

When she couldn’t become an astronaut because women weren’t allowed to be test pilots, she decided to become a doctor so NASA would send her up to care for other astronauts. When she didn’t get into medical school on her first try, she got her master’s degree in chemistry – a degree that was instrumental in her selection as one of the first six female astronauts.

“Sometimes, when you read or hear about a person who appears to be successful, it sounds as though it was smooth sailing the entire time,” Fisher said. “I’ve had many missteps and disappointments along the way, and inevitably, you will, as well. Learn from those experiences and use that newfound knowledge to continue to pursue your dreams.”

Through it all, she said the hardest things she ever did were leaving her then-14-month-old daughter during her first space flight, and returning to NASA after the birth of her second daughter.

“I also, incidentally ... became the first mother to fly in space,” Fisher said. “I did not consider it a big deal, as most of my male colleagues had children as well. But of course my daughter says I owe it all to her. … For you parents and families, as you can see, even though I have three degrees, have been a doctor and an astronaut and have flown in space, I am still ‘just Mom’ to them.”

Graduating senior Kaitlyn Kim delivered the student speech at the 2 p.m. ceremony, noting that she has seen first hand how UCLA’s embrace of first-generation college students, immigrants and low-income families can lift up the generations that follow – because her parents were South Korean immigrants who both graduated from UCLA. 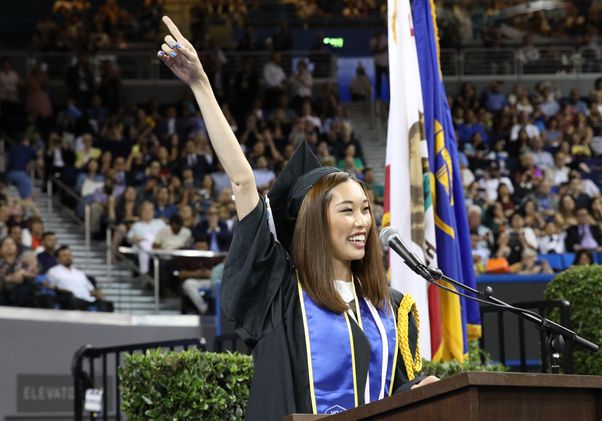 “Just because my parents and I went to the same school does not mean we had the same experience,” Kim said. “My dad worked as an on-campus vending machine cart driver in order to pay for his tuition, and my mom was a commuter student, responsible for taking care of her two younger siblings.”

Kim’s parents made it possible for her to live on campus and focus on her studies instead of working long hours at a job, she said. Soon, the California native and communications major starts her new job as a fashion buyer for a Fortune 500 company.

“Because of the sacrifices they made, my parents paved the path for me,” Kim said. Just as her parents lit the way for her and UCLA lit the way for them, she added, “let us hope to bring light to the entire world, one Bruin at a time.”

Graduating senior Ashraf Beshay delivered the student speech at the 7 p.m. ceremony. Beshay came to the United States as an asylum seeker to escape threats after taking part in the Egyptian Revolution. His mother, whom he hadn’t seen for five years, was able to visit UCLA for the first time to see Beshay and his sister both graduate, and the siblings have kept his role as student speaker a secret to surprise her. Commitment to each other and the betterment of society should be the graduates’ promise, according to his prepared speech.

“It is that promise that manifests into our social justice movements and strengthens our conviction that ‘Black Lives Matter,’ that immigration is beautiful, that we are now standing on Native American land, that women’s rights are human rights, and equal labor deserves equal pay, and that ‘the world is over-armed and peace is so sorely underfunded,’” Beshay wrote in his remarks. “These very basic human principles must guide our engagement with a world so far from where it needs to be, to be just.”

As Friday’s first commencement ceremony drew to a close, Block formally conferred the bachelor’s degrees to raucous applause. Kim stepped forward once more to lead her fellow students in the turning of the tassels to the left, one of their last college rituals.

“Graduates, let me congratulate all of us on becoming the newest alumni of UCLA – as the Class of 2019!” Kim said. The new graduates flung their hats in the air before pouring out of Pauley Pavilion to greet family members, perhaps remembering some of Fisher’s final words – words with extra resonance, coming from an astronaut. 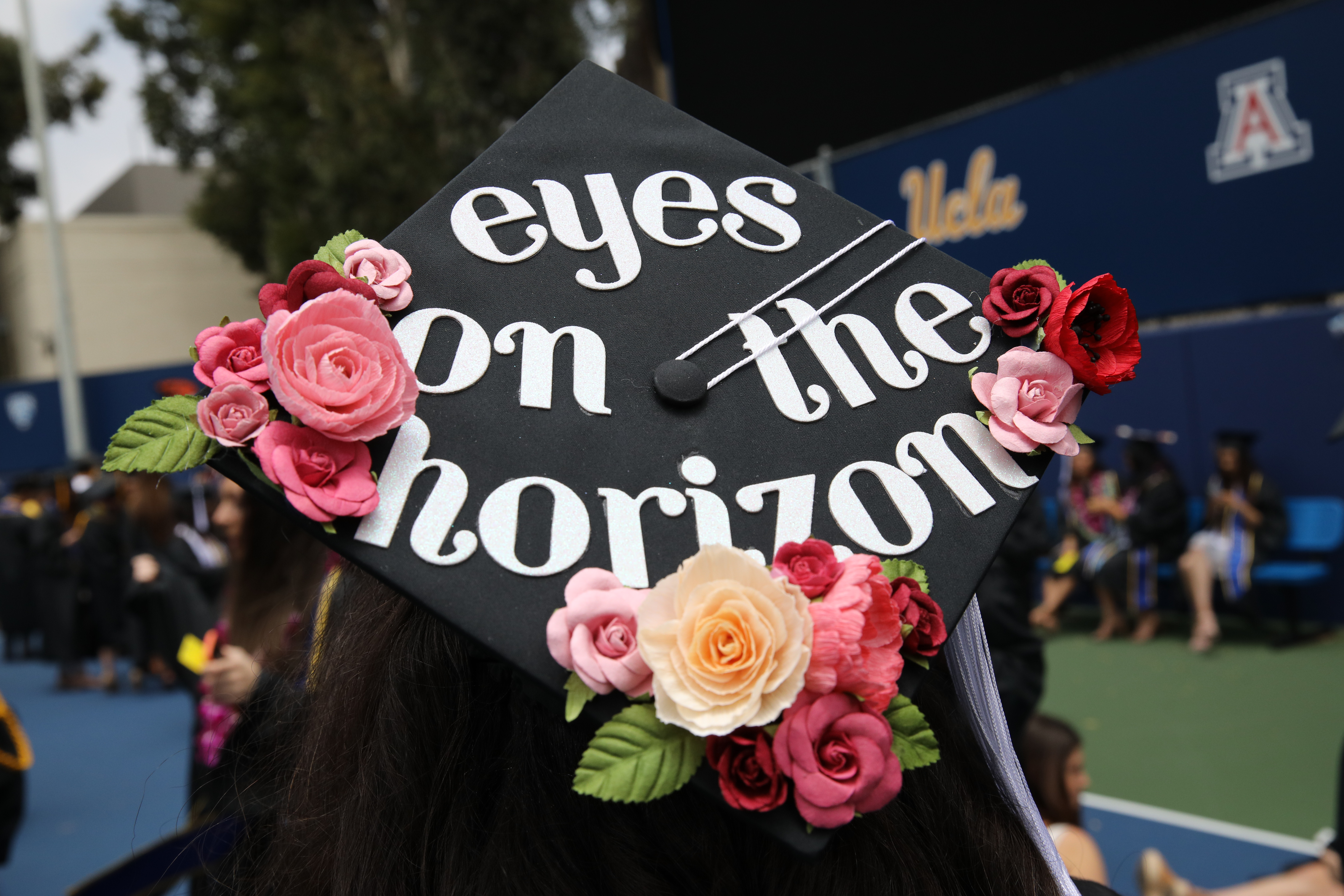 More stories and photos from the class of 2019 commencement season