A 39-year-old man who had been completely paralyzed for four years was able to voluntarily control his leg muscles and take thousands of steps in a “robotic exoskeleton” device during five days of training — and for two weeks afterward — a team of UCLA scientists reports this week.

This is the first time that a person with chronic, complete paralysis has regained enough voluntary control to actively work with a robotic device designed to enhance mobility.

In addition to the robotic device, the man was aided by a novel noninvasive spinal stimulation technique that does not require surgery. His leg movements also resulted in other health benefits, including improved cardiovascular function and muscle tone.

The new approach combines a battery-powered wearable bionic suit that enables people to move their legs in a step-like fashion, with a noninvasive procedure that the same researchers had previously used to enable five men who had been completely paralyzed to move their legs in a rhythmic motion. That earlier achievement is believed to be the first time people who are completely paralyzed have been able to relearn voluntary leg movements without surgery. (The researchers do not describe the achievement as “walking” because no one who is completely paralyzed has independently walked in the absence of the robotic device and electrical stimulation of the spinal cord.)

In the latest study, the researchers treated Mark Pollock, who lost his sight in 1998 and later became the first blind man to race to the South Pole. In 2010, Pollock fell from a second-story window and suffered a spinal cord injury that left him paralyzed from the waist down.

“In the last few weeks of the trial, my heart rate hit 138 beats per minute,” Pollock said. “This is an aerobic training zone, a rate I haven’t even come close to since being paralyzed while walking in the robot alone, without these interventions. That was a very exciting, emotional moment for me, having spent my whole adult life before breaking my back as an athlete.”

Even in the years since he lost his sight, Pollock has competed in ultra-endurance races across deserts, mountains and the polar ice caps. He also won silver and bronze medals in rowing at the Commonwealth Games and launched a motivational speaking business.

“Stepping with the stimulation and having my heart rate increase, along with the awareness of my legs under me, was addictive. I wanted more,” he said.

The research was published by the IEEE Engineering in Medicine and Biology Society, the world’s largest society of biomedical engineers.

“It will be difficult to get people with complete paralysis to walk completely independently, but even if they don’t accomplish that, the fact they can assist themselves in walking will greatly improve their overall health and quality of life,” said V. Reggie Edgerton, senior author of the research and a UCLA distinguished professor of integrative biology and physiology, neurobiology and neurosurgery.

The procedure used a robotic device manufactured by Richmond, California-based Ekso Bionics which captures data that enables the research team to determine how much the subject is moving his own limbs, as opposed to being aided by the device.

“If the robot does all the work, the subject becomes passive and the nervous system shuts down,” Edgerton said.

The data showed that Pollock was actively flexing his left knee and raising his left leg and that during and after the electrical stimulation, he was able to voluntarily assist the robot during stepping; it wasn’t just the robotic device doing the work. 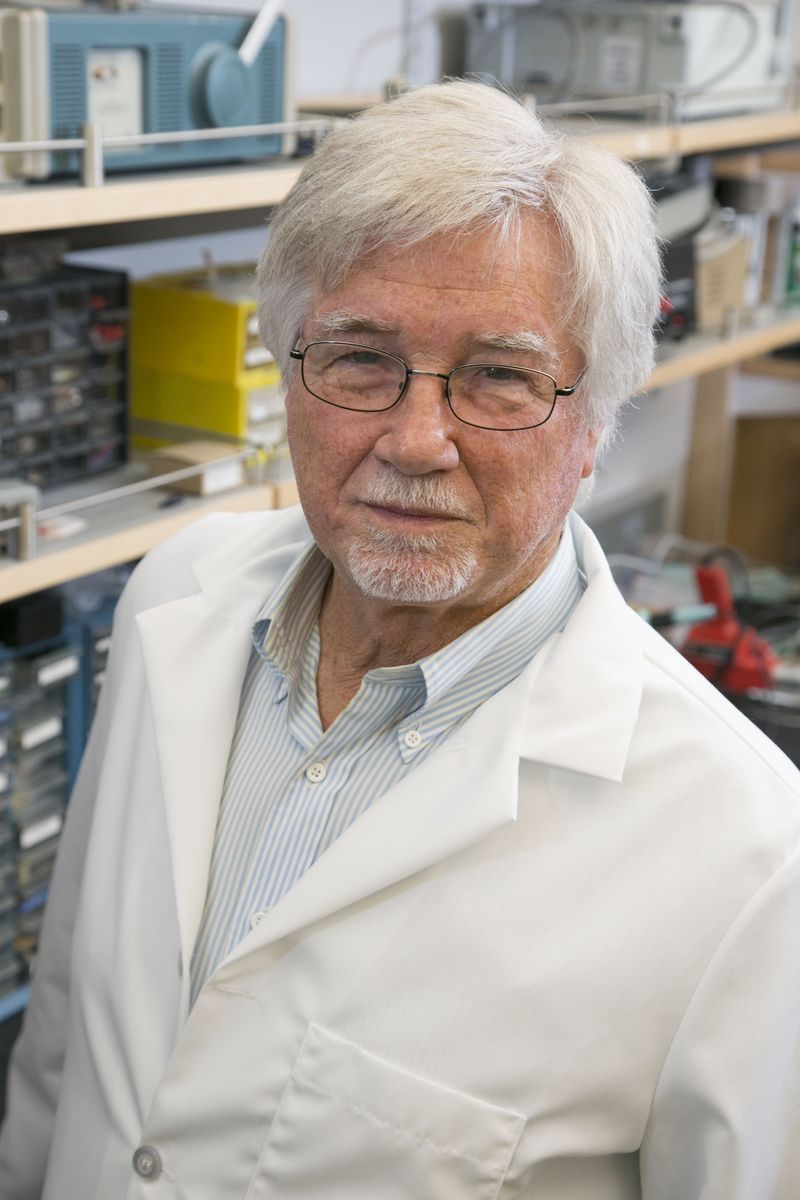 “For people who are severely injured but not completely paralyzed, there’s every reason to believe that they will have the opportunity to use these types of interventions to further improve their level of function. They’re likely to improve even more,” Edgerton said. “We need to expand the clinical toolbox available for people with spinal cord injury and other diseases.”

Edgerton and his research team have received many awards and honors for their research, including Popular Mechanics’ 2011 Breakthrough Award.

“Dr. Edgerton is a pioneer and we are encouraged by these findings to broaden our understanding of possible treatment options for paralysis,” said Peter Wilderotter, president and CEO of the Christopher and Dana Reeve Foundation, which helped fund the research. “Given the complexities of a spinal cord injury, there will be no one-size-fits-all cure but rather a combination of different interventions to achieve functional recovery.

“What we are seeing right now in the field of spinal cord research is a surge of momentum with new directions and approaches to remind the spine of its potential even years after an injury,” he said.

Grace Peng, director of NIBIB’s Rehabilitation Engineering Program, said, “This is a great example of a therapeutic approach that combines two very different modalities — neuromodulation and robotic assist devices — to achieve a result that could not be realized with either approach alone. This multi-device approach, much like multi-drug therapy, may ultimately benefit patients with impaired mobility in a wide variety of rehabilitation settings.”

NeuroRecovery Technologies, a medical technology company Edgerton founded, designs and develops devices that help restore movement in patients with paralysis. The company provided the device used to stimulate the spinal cord in combination with the Ekso in this research.

Edgerton said although it likely will be years before the new approaches are widely available, he now believes it is possible to significantly improve quality of life for patients with severe spinal cord injuries, and to help them recover multiple body functions. Although his laboratory is making dramatic progress, it only is able to work with a small number of patients due to limited resources.

“We could accomplish a lot more in advancing the science and technology with more resources,” Edgerton said.