When UCLA professor Maite Zubiaurre decided to make a documentary about volunteers who search for the remains of migrants in the desert between the U.S. and Mexico, she wanted people to see what she believes has become invisible: not just the deaths, but how ignoring them enables policies that lead to even more deaths.

Now she’ll have an opportunity to help bring that hidden reality to light. Her 14-minute film “Águilas,” co-directed with Kristy Guevara-Flanagan, a professor at the UCLA School of Theater, Film and Television, has been selected to screen at both the Big Sky Documentary Film Festival (Feb. 20–28) and SXSW Film Festival (March 16–20) competitions. The mini-doc will then be available for a year through the New Yorker’s website.

The film garnering all this interest took shape when Zubiaurre, a professor of European languages and transcultural studies, and of Spanish and Portuguese, approached Guevara-Flanagan with the idea of highlighting the work of Águilas del Desierto (Desert Eagles), a humanitarian search-and-rescue group that scours the Arizona desert on weekends, looking for those reported missing. The documentary follows the volunteers on one of their searches.

Zubiaurre, who also co-leads UCLA’s Urban Humanities Initiative, spoke with us about the film and her concept of “forensic empathy,” which centers on consciousness-raising activism and compassion-triggering artistic practices around migrant suffering and death. Some responses have been edited for brevity and clarity.

It’s clear that you are very moved and inspired by the work of Águilas del Desierto. Who are they?

They’re a group of volunteers from San Diego. At least once a month, they search for missing migrants to bring families some sort of closure. The weekend that we filmed the documentary, we found six bodies, all skeletal remains.

Most of the volunteers are migrants themselves, and they’re all workers — construction workers, domestic workers, gardeners, laborers, you name it. They finish work around 7 on Friday night, drive their trucks seven hours to Arizona, sleep for maybe three hours and then walk for hours through that harsh and harrowing landscape. I have volunteered with them since 2016, and it’s truly very hard. They sleep in a tent on Saturday night and search on Sunday until they have to drive home. Then they get up early Monday morning and go back to work.

Needless to say, they don’t have any steady funding. They have a website and a Facebook page, and they set up stands in swap meets, where they talk about their work and collect donations. Those are also ways they hear about the missing.

What the Águilas do, their heroic efforts and altruism, deserves recognition. Their work needs to be made visible. This short documentary isn’t looking at all the pieces of the issue, but it looks at one specific piece to raise awareness about what is happening at the border and hopefully help change it.

You’ve said this documentary is a humanitarian plea. What action do you hope it will inspire?

People don’t want to deal with the fact that migration is creating this humanitarian crisis. In 2020, Arizona’s Pima County morgue recovered 227 migrants’ bodies. In the 1990s, they would find 10 or 20 bodies. The numbers have skyrocketed because of “Prevention Through Deterrence,” a set of U.S. government policies that militarily fortify urban crossing points, forcing migrants to cross through unforgiving desert terrain. The loose estimate is that for each body they find, there are five that the desert never gives back. 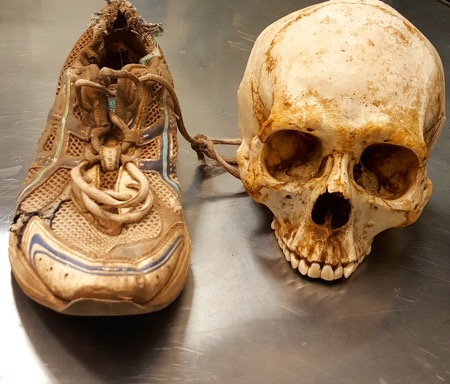 Maite Zubiaurre
Skull and shoe belonging to an unidentified immigrant, held by the Office of the Medical Examiner in Pima County, Arizona.

This has become invisible, despite its radical visibility: The bones are literally laying exposed in the sun. I want to raise awareness, and most importantly, effect policy change.

This documentary, and a feature documentary in the making, are part of a larger, three-pronged interdisciplinary and collaborative endeavor called forensic empathy that I initiated and lead. The other participants are the Tijuana-based filmic and artistic collective Dignicraft — José Luis Figueroa, Ana Paola Rodríguez and Omar Foglio — and Jonathan Crisman, an assistant professor at the University of Arizona.

We are also writing a scholarly monograph and leading the creation of a digital map of the border. There’s the imaginary border you see on most maps — a criminally simplified version that our map wants to complicate. It’s not all bad guys trying to get into a perfect country. We’re complicating the map with prisons, migrant assistance groups, artist studios. We’re thickening the map so students can learn about the complexity of the border.

If you teach students complexity, they will pause and reflect. If you oversimplify, they will not reflect, and they will believe in fallacies.

How does forensic empathy shine a light on this topic in a new way?

We have to look at this grim reality through the eyes of empathy, not just through the cold statistics. Forensic empathy is a direct response to the tragedy of the horrifyingly high number of undocumented immigrants who perish year after year while crossing the U.S.–Mexico border. It studies the forensic efforts, archival practices and art interventions that take place around border casualties and looks at the personal belongings found on the deceased immigrants through the eyes of chief examiners, consular agencies, policymakers, nonprofit organizations and artist-activists. 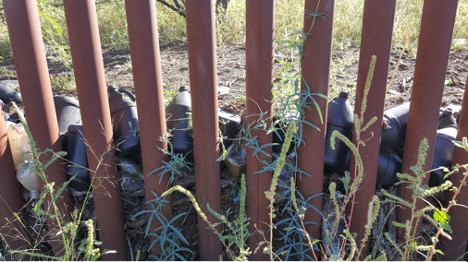 Maite Zubiaurre
Water bottles belonging to migrants piled up against the U.S.–Mexico border wall after monsoon season in southern Arizona.

The personal belongings recovered in the desert tell a story. Belongings like camouflaged clothes, carpet-soled shoes and matte water bottles are all designed to help the migrants truly disappear into the landscape. But hundreds of bodies are found, not just by the Águilas, but by day-trippers, hunters, even dog walkers. The migrants die of dehydration, hypothermia, hyperthermia. Yet because we don’t want to look at our failure as a society, the bodies become invisible and so does the apparatus around it that increases the deaths.

This is a key role of the humanities, to apply critical thinking in dealing with the crucial issues of our times and to spearhead initiatives that connect with the community and fully invest in social justice.

April 14: “Águilas” can be viewed on the New Yorker website.

On March 19, “Águilas” won the Documentary Shorts Jury Award at the 2021 SXSW Film Festival, furthering the film’s goal of raising awareness about the need for changes in immigration policy. The documentary was praised as “a film that most poignantly displays the need immigrants feel to come to America — even at the cost of starvation and death.”

On Feb. 25, the film collected the best mini-doc award at the Big Sky Documentary Film Festival. In awarding the prize, the festival jury wrote that the documentary “powerfully encapsulates a complex and ongoing crisis on the U.S./Mexico border … ÁGUILAS quietly but effectively calls out the utter absence of government in their endeavor.”