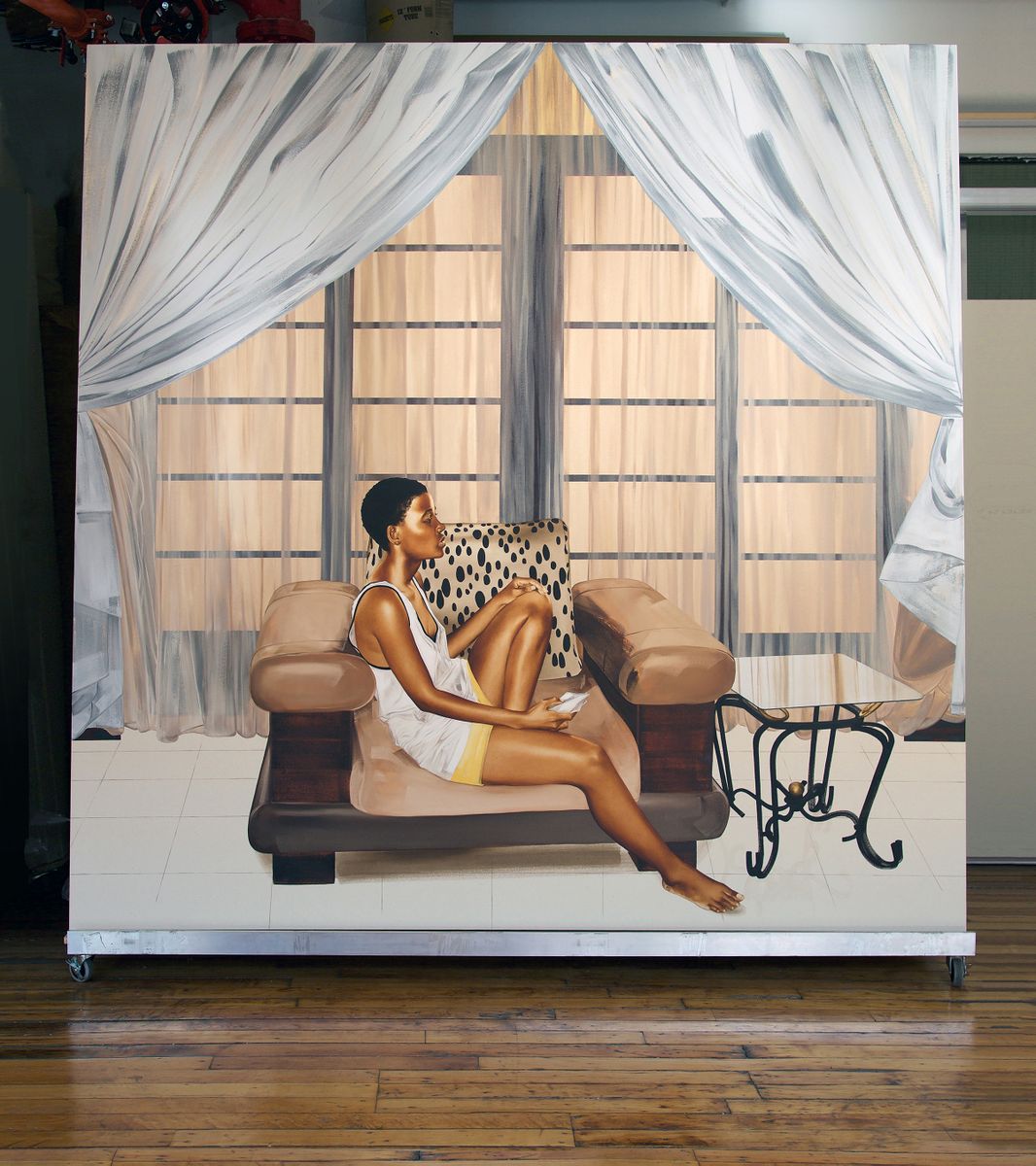 A new exhibition at the Fowler Museum at UCLA will feature 20 large-scale paintings hung frieze-style around the perimeter of the Lucas Gallery that masterfully render scenes of daily life in southern Africa addressing themes of feminism, the gendered division of labor, and the place of women in the nation-state.

“Meleko Mokgosi: Bread, Butter, and Power” is a newly commissioned installation and the most recent chapter in Mokgosi’s series “Democratic Intuition” (2013–present), which explores the ways that democratic concepts influence our lives, loves and relationships. The exhibition opens Feb. 11, 2018 and runs through July 1.

“Bread, Butter, and Power” is Mokgosi’s first solo museum exhibition in Los Angeles and also a homecoming for the Botswana-born, New York-based artist, who earned his M.F.A. from the interdisciplinary studio program at UCLA in 2011. Solo exhibitions of Mokgosi’s work have recently been presented at the Williams College Museum of Art (2017); the Memorial Art Gallery of the University of Rochester and Rochester Contemporary Art Center (2017); and the Institute of Contemporary Art, Boston (2015).

Several paintings in the installation depict intimate scenes of men and women in their homes — interior spaces that reflect their lived experience. In one, a young woman sits casually on a comfortable chair in an airy, well-appointed room. Her leisurely pose raises questions about the labor expected of women according to their socioeconomic positions. Other canvases venture outdoors to portray groups of school children and market stands. These explore ideas about the varied standing of women across the social fabric of southern Africa, the sacrifices made by women and the failure of national governments to value their hard work.

Mokgosi is, by his own account, a history painter. He employs a European style of narrative storytelling to reclaim histories of southern Africa and distinguish them from those imposed by colonial powers. This approach posits new stories while simultaneously upending accepted narratives. Before he begins each new chapter of a painting series, Mokgosi spends time gathering images and creating storyboards that reflect the intertwined roles of politics and history. Again subverting the conventions of traditional Western painting, he leaves his canvases unprimed. The raw canvas means that every brushstroke has permanency; fixing “mistakes” is not an option. The intentionality and precision of Mokgosi’s painting underscores the urgency of his messages.

Mokgosi lends his critical voice to the experiences of young African artists of his generation, born since the euphoria of the 1960s independence movements. In adopting a historian’s approach — drawing on extensive research and theoretical grounding — he provides new perspectives on the transition from the colonial era through to Botswana’s independence, and interrogates the current moment as it relates to the rippling ramifications of the past. Mokgosi has said: “I think historical specifics are crucial because I am grappling with the epistemological effects of colonialism in southern Africa. So it is urgent, I believe, to parse out how history has been legitimized, what dominant histories have been left out, and more importantly, how to trace untracked histories and bring them to the fore, because these are all histories that matter.”

An illustrated publication will include an essay by exhibition organizer Erica Jones, associate curator of African arts at the Fowler Museum at UCLA.

Meleko Mokgosi was born in 1981 in Francistown, Botswana and he now lives in New York, where he teaches at the Gallatin School at New York University. He completed the Affiliate Painting Program at the Slade School of Fine Art, University of London in 2006; received his bachelor of fine arts from Williams College in 2007; attended the independent study program at the Whitney Museum of American Art, New York from 2007–2008; and received his M.F.A. from UCLA in 2011.

Solo exhibitions of Mokgosi’s work have been presented at the Williams College Museum of Art, Williamstown, MA (2017); the Memorial Art Gallery of the University of Rochester and Rochester Contemporary Art Center, Rochester, NY (2017); and the Institute of Contemporary Art, Boston (2015). His work is in the collections of, among other institutions, the Hammer Museum at UCLA; the Studio Museum in Harlem, New York; and the Eckard Collection, The Hague. He is represented by Honor Fraser Gallery, Los Angeles; Jack Shainman Gallery, New York; and Stevenson Gallery, Cape Town.

Mokgosi is the recipient of numerous honors including a Pollock-Krasner Foundation grant (2017); an Elizabeth Greenshields Foundation grant (2017); a Vilcek Prize for Creative Promise in Fine Arts (2017); a Painters and Sculptors Grant from the Joan Mitchell Foundation (2016); and the Mohn Award in conjunction with the Hammer Museum’s “Made in L.A. 2012.” He participated in the Rauschenberg Residency at the Robert Rauschenberg Foundation, Captiva, Florida (2015), and the artist-in-residence program at the Studio Museum in Harlem (2011–2012).

“Meleko Mokgosi: Bread, Butter, and Power” is organized by the Fowler Museum at UCLA and curated by Erica Jones, Associate Curator of African Arts. Major support is provided by the Philip Ravenhill Endowed Fund, the Fay Bettye Green Fund to Commission New Work, and the Fowler Contemporary Council. Additional support provided by Laura Donnelley and the Good Works Foundation, and Pamela and Jarl Mohn.