​With its glowing reviews and box office success, “Black Panther” is a revelatory moment for the entertainment industry.

Those results underscore what UCLA’s Hollywood Diversity Report has been telling us about the appetites of film audiences in the U.S. and overseas, and suggests that the industry at large should invest in hiring that is reflective of the U.S. population, which is nearly 40 percent minority and at least 50 percent female. The fifth annual report was published today.

“We’re committed to examining diversity and gender disparity in Hollywood films and television shows and relating these findings to the bottom line of box office and ratings,” said Darnell Hunt, dean of Division of Social Sciences in the UCLA College and co-lead author of the report. “In part, we hope this serves as tool for artists, producers, writers, directors and actors who are seeking funding and support for future projects that appropriately and creatively reflect the gender and ethnic diversity of the United States.”

The study analyzed the casts of and talent behind the top 200 theatrical releases of 2016 and 1,251 broadcast, cable and digital platform television shows from the 2015–16 season.

“Our findings reveal that, regardless of race, audiences want to see diversity on the screen,” said Ana-Christina Ramón, director of research and civic engagement for the Division of Social Sciences, and the report’s other lead author. “Our reports have continually shown that diversity sells, but the TV and film product continues to fall short. So audiences are left wanting more representation on screen that reflects the world they see in their daily lives.”

The report dispels what it calls the “myth of international distribution” — the Hollywood notion that films with diverse casts won’t succeed in the increasingly important markets outside of the U.S. In 2016, the study found, U.S. films with the most diverse casts were released in fewer international markets than those with overwhelmingly white casts, despite the fact that the world’s population is as diverse as the United States. 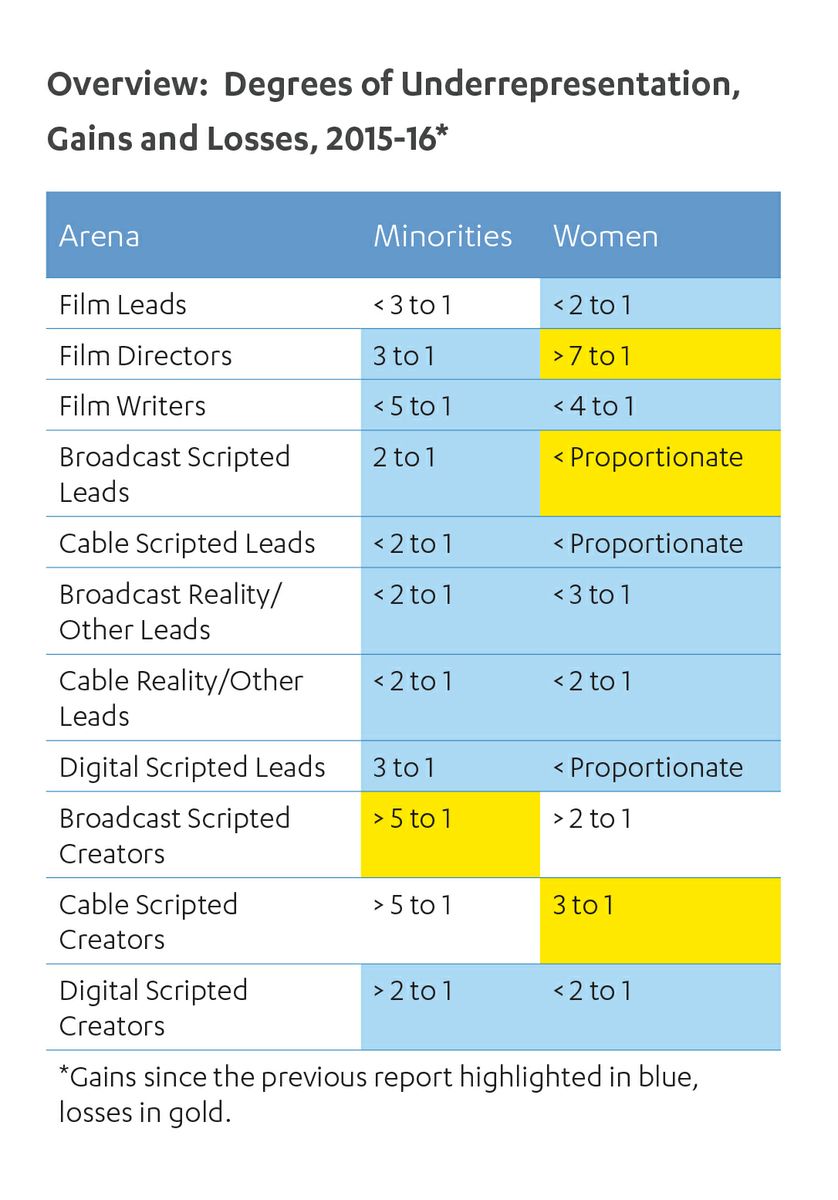 In 2016, the report found, films with casts made up of 21 to 30 percent minority actors enjoyed the highest median global box office ticket sales and the highest median return on investment. Films with the most racially homogenous casts were the poorest financial performers.

Even as the report demonstrates audiences’ preference for films and TV shows with diverse casts, it paints a picture of an industry slow to correct its own gender and racial disparities. The level of representation for women and minorities mostly improved from 2015 to 2016 — especially in acting roles in film and cable shows — but their numbers remained stagnant in some areas and declined in others.

The 2018 report also coincides with the growing strength of the #MeToo and #TimesUp movements, which have exposed sexual harassment and assault in nearly every industry, including entertainment. Ramon said those efforts have amplified the rallying cries for gender diversity in Hollywood, and they could be another important sign that the industry is poised to transform how women are represented on the big and small screens, and in studio board rooms.

“Achieving gender equity in high-powered positions at the studio and network level, as well as in creative roles behind the camera, will help shift the culture,” Ramón said. “However, both men and women must make a concerted effort to make this happen and to hold the industry accountable for a safer environment where women can thrive.” 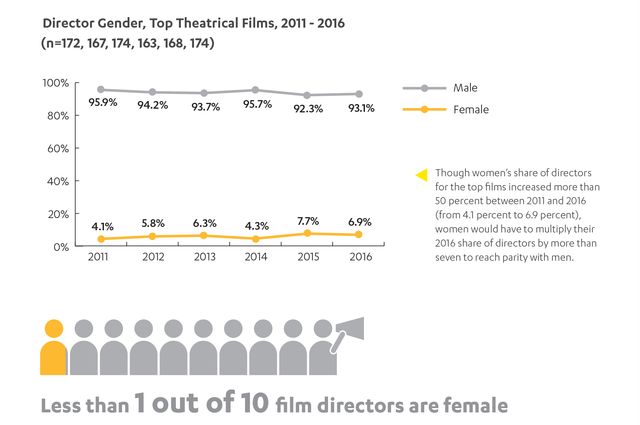 Women remained underrepresented, compared with their numbers in the U.S. population overall, in all 11 employment categories the report examines; and they actually lost ground, compared with last year’s figures, as lead actors in broadcast scripted shows, as creators of cable shows and as directors. Women directed only 6.9 percent of the top 200 films, down from 7.7 in the previous year’s report.

The job title with the best gender parity was lead actor roles in cable scripted shows, of which 45 percent were held by women.

This year’s report again illustrates that Hollywood studios are leaving money on the table by not developing films and TV shows with more diverse casts. The data demonstrated that TV shows with greater diversity typically get higher ratings and enjoy higher levels of social media engagement across all ethnic groups.

“While trend lines are pointing in the right direction, we have a long way to go before people of color or women reach proportionate representation in most areas, particularly behind the camera,” Hunt said.

For the first time, the report examined the intersection of race and gender among actors. Across all ethnic groups, women in film roles were underrepresented compared to men of the same ethnicity.

Among white and black actors on broadcast scripted shows, women had fewer roles than men during the 2015–16 season. Latino women and mixed-race women claimed more roles than men of those racial backgrounds. Meanwhile, men and women of Asian descent were represented nearly equally, although Asian actors had a small percentage of roles overall.

And while Jordan Peele, who is African-American, and Greta Gerwig each received nominations for directing and screenplays for this year’s Academy Awards, positions in directing and writing continue to have the deepest divides for both people of color and women.

The report also includes a preliminary analysis of gender and racial diversity among 2017–18 television programs. Actors of color claimed 28 percent of the lead roles for new scripted shows in broadcast, cable and digital, but women lost ground in acting roles. And there were fewer women or people of color among TV show creators compared to the 2015–16 season, the report found.

The Hollywood Diversity Report is a project of UCLA's Institute for Research on Labor and Employment, which is housed within the UCLA College. It was previously produced under the auspices of the Ralph J. Bunche Center for African American Studies at UCLA.