Dr. Sherman Mussoff Mellinkoff, who transformed the fledgling UCLA School of Medicine during his 24-year tenure as dean into a nationally recognized academic institution, died of congestive heart failure on July 17 at his home in Westwood. He was 96.

“Sherm Mellinkoff served the UCLA School of Medicine as dean for nearly a quarter century — an incredible feat compared to the average five-year term of a U.S. medical school dean,” said Dr. John Mazziotta, vice chancellor of UCLA Health Sciences and CEO of UCLA Health. “Thanks to his brilliant vision and extraordinary leadership, UCLA quickly gained a national reputation for outstanding medical education and groundbreaking research.”

Under Mellinkoff’s direction, the school grew from its inaugural class of 28 students to include 1,500 interns, residents and fellows, almost 200 master’s and doctoral candidates, and 3,000 alumni. The faculty quadrupled to 1,200 full-time members; the school’s budget burgeoned from $15 million to over $180 million; and the school established multiple organ transplant programs, a comprehensive cancer center and one of the first federally funded facilities for positron emission tomography, or PET, research.

When Mellinkoff assumed the deanship in 1962 at the age of 42, the school was barely a decade old. Students attended lectures in a lounge in the UCLA Religious Conference Building and researchers worked in temporary Quonset huts while construction crews built the Center for Health Sciences to permanently house the medical school, which launched in 1951, and the hospital, which opened in 1955.

“In the early 1960s, UCLA was a young school compared to its academic rival USC,” said Dr. Alan Fogelman, chair of the department of medicine, who was a medical student when he met Mellinkoff in 1963. “Sherm served as the face of UCLA medicine and enabled us to become part of the community in a meaningful way.”

Mellinkoff was born on March 23, 1920, in McKeesport, Pennsylvania. He was the third of four children born to Albert and Helen Mellinkoff, Ashkenazi Jews of Russian-Polish descent. His father worked as a sales clerk and his mother as a bookkeeper at a shoe store in Pittsburgh. Shortly after Mellinkoff’s birth, his family moved to Los Angeles, where his father opened his own business, Mellinkoff’s Rite-Fit Shoe Co. — which he fortuitously sold before the stock market crash in 1929.

As a teenager at Beverly Hills High School, Mellinkoff demonstrated an early talent for leadership, distinguishing himself as student body president and a scholarship awardee. Inheriting his father’s scholarly love of the classics, he was also a top debater. He once famously said, “By the time I was in high school, I was interested in literature, history and debating — everything except medicine.”

That changed during Mellinkoff’s senior year, when he took a biology class taught by a local physician. Inspired, he went on to Stanford University, where he dove into the pre-med curriculum, graduated Phi Beta Kappa in 1941 and enrolled in the university’s medical school. During his training, a nurse named June O’Connell captured his attention. They married in 1944 and had three children.

Mellinkoff served a two-year stint in the U.S. Army medical corps, achieving the rank of captain. After completing his residency at Johns Hopkins University in 1947, he pursued a gastroenterology fellowship at the University of Pennsylvania, and then returned to Johns Hopkins as chief resident in 1951. 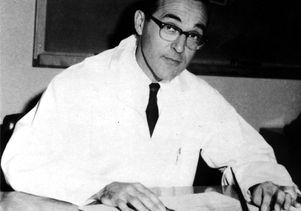 Dr. Mellinkoff in 1963, just one year into his position as medical school dean.

UCLA recruited Mellinkoff to his first faculty post in 1953, just two years after the medical school had opened its doors. In 1962, UCLA Chancellor Franklin Murphy asked the young professor to take the helm as the school’s second dean.

Under Mellinkoff’s direction, the school exploded in size and stature. He recruited a dazzling array of scientists and clinicians whose achievements formed the foundation for UCLA’s rising reputation. Colleagues credit his sharp eye for talent, gift of persuasion and unwavering support for faculty as the keys to his longevity and success.

Acclaimed scientist and Pulitzer-Prize winning author Jared Diamond recalled Mellinkoff as gentle, engaging and unlike any dean he’d ever met. When negotiating his job transition from Harvard to UCLA in 1965, Diamond wanted to maintain his dual careers studying birds and physiology but was apprehensive about how Mellinkoff would react.

“Sherm’s response was unforgettable,” Diamond recalled. “He looked me in the eye and said with complete sincerity, ‘Jared, UCLA is interested in New Guinea birds. We are going to give you $5,000 a year to support your research there.’" Stunned at the unexpected offer, which exceeded the cost of a New Guinea expedition in those days, Diamond sealed the deal.

Michael Phelps, chair of molecular and medical pharmacology and co-inventor of the PET scan, was another colleague who became a close friend of Mellinkoff, who recruited him to incorporate PET into clinical practice, with an emphasis on whole-body cancer screening.

“Sherm believed that his job was to help the faculty,” said Phelps. “It was not about him; he sought to create greatness in others.”

In fact, said Phelps, the charismatic dean displayed a deft politician’s touch when it came to inspiring confidence in his colleagues.

“He would tell me, ‘You are the No. 1 person in my heart,'” said Phelps. “I went to a party that night and met three other people he’d told the same thing. When I confronted him, he said, ‘Well, I have a really big heart.’”

Dr. Kenneth Shine, who succeeded Mellinkoff as dean in 1986, described him as a remarkable scholar of literature who never carried on a conversation without citing great authors. He called him the only man he knew “who could quote James Thurber and Ecclesiastes in the same sentence.”  An avid fan of history and baseball, Mellinkoff also was known to pepper his speech with passages from Winston Churchill and baseball pitcher Nolan Ryan.

During his tenure, the school excelled in both research and clinical practice, developing renal, bone marrow, heart and liver transplant programs. Seven faculty members were elected to the National Academy of Sciences, and UCLA scientists made major discoveries in tissue typing, organ transplantation and neuroscience. The National Institutes of Health funded one of the first PET research centers at UCLA, and the National Cancer Institute designated UCLA as a comprehensive cancer center.

Mellinkoff waved away personal praise for the school’s accomplishments, preferring to credit the faculty and staff he entrusted with moving the school forward. “I tell them that if they made mistakes, they would get all the blame, and if they made good decisions, they would get all the credit," he once said. "If people know this, they are more apt to make conscientious judgments and to learn from their mistakes and successes.”

Reflecting his deep commitment to educating the next generation of physicians and providing care to the medically underserved, Mellinkoff initiated a partnership between the School of Medicine and the Charles R. Drew University of Medicine and Science to train medical students to serve low-income patients in South Los Angeles. He forged a program that enabled UC Riverside pre-med students to expedite their education by taking advantage of UCLA’s clinical training resources to graduate with a UCLA medical degree.

After retiring in 1986, Mellinkoff took a yearlong sabbatical to travel, and then returned to UCLA to teach medicine as the first recipient of a $1 million endowed professorship privately funded in his name by friends.

Mellinkoff was a member of the National Academy of Sciences, vice president of the American Academy of Arts and Sciences and a fellow of the United Kingdom’s  Royal College of Physicians. He held honorary doctorate degrees from two universities and received multiple awards from the Association of American Medical Colleges.

Mellinkoff is survived by two children, Albert and Sherri Mellinkoff.

To honor Mellinkoff’s commitment to supporting medical students from diverse and economically disadvantaged backgrounds, his family requests that donations in his memory be directed to the June and Sherman M. Mellinkoff, M.D., Medical Alumni Scholarship Fund at the David Geffen School of Medicine at UCLA. Checks should be made payable to “The UCLA Foundation in memory of Sherman M. Mellinkoff, M.D.,” and sent to UCLA Health Sciences, Attn: Laura Pescatore, 10945 Le Conte Avenue, Suite 3132, Los Angeles, CA 90095-1784. For more information, call 310-825-1288.