More than half of Los Angeles County residents are worried that they might have to move because of the rising costs of housing in the region, according to the 2018 Quality of Life Index, a project of the UCLA Luskin School of Public Affairs’ Los Angeles Initiative and The California Endowment. The concern is even more prevalent among residents younger than 50, the study found.

The annual survey asks county residents to rate their quality of life in a range of categories and to answer questions about important issues facing them and the region.

Residents’ concerns about housing affordability are among the major findings in this year’s survey. When asked whether they, a close friend or family member has considered moving from their neighborhood in the past few years because of rising housing costs, 55 percent answered yes — up from 47 percent last year. 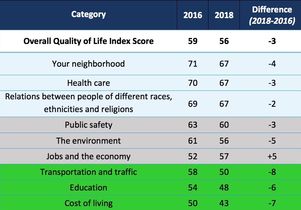 UCLA Luskin/The California Endowment
Since 2016, scores declined in all but one category

Among younger respondents, that percentage soared. Sixty-eight percent of 18-to-29-year-olds, 73 percent of 30-to-39-year-olds, and 65 percent of 40-to-49-year-olds said they or someone close to them has considered moving due to housing costs.

“It is troubling that younger county residents are less hopeful and less positive about their quality of life in Los Angeles,” said Zev Yaroslavsky, director of the Los Angeles Initiative at UCLA Luskin. “Historically, young people, especially in Los Angeles, could look forward to a great future, but today they have the highest level of negativity and anxiety, especially those between the ages of 18 and29. This should be a matter of concern to all of us.”