Birds do it. Bees do it. Even spiders in their webs do it: cooperate for more peaceful colonies.

That’s one of the surprising findings of a new study by UCLA undergraduates of orb-weaving spiders in Peru.

The study also revealed that when there are more females than males in colonies of orb-weaving spiders, males fight less with each other — and that females fight less in female-dominated colonies than in male-dominated ones, leading to colonies that are somewhat more peaceful. The spiders also showed little hostility to individuals from different colonies, a discovery that has not been previously documented for colonial spiders.

The research was published in the Journal of Arachnology.

“We’re used to thinking of animals like honeybees and elephants living cooperatively,” said the paper’s senior author, Gregory Grether, a UCLA professor of ecology and evolutionary biology. “But spiders usually live solitarily, so we were excited to study these colonial spiders and find out how they interact with colony mates as well as with individuals from other colonies.”

Orb-weaving spiders spin webs connected to each other in vast networks anchored to surrounding vegetation. Within the colonies, individuals guard their own webs from intruders and often fight each other over food and mates. They retreat to common areas for protection when threatened, and some species defend common areas.

The four student authors — Catherine Wu, Chaiti Bhagawat, Modan Goldman and Nihal Punjabi — were taking part in a field course Grether led at the Cocha Cashu Biological Station in southeastern Peru. Their four-day voyage to reach the field research station included a long and winding bus ride through the Andes and a boat trip down the Madre de Dios River and up one of its tributaries.

Over the course of 18 days, the students studied 34 colonies of a species called Philoponella republicana to learn if the location of the web, the ratio of male to female spiders, or the size of the web or of the spiders themselves affected the animals’ level of aggression. Their work was overseen by Grether as well as Debra Shier, a UCLA adjunct professor, and Roxana Arauco-Aliaga, a social insect and spider researcher who was the Cocha Cashu research coordinator and adjunct director at the time.

They observed spiders cooperating to construct their webs and wrapping prey in silk, although the spiders did not share their food — only one spider ate a given prey item.

The students staged intrusions by placing spiders in different places and relocating spiders from other colonies. Some spiders defended their own orb web against all intruders, but spiders did not cooperate to repel intruders.

When the colonies had more females than males, males fought with other males and females fought with males less than they did in male-dominated groups, resulting in somewhat more peaceful colonies.

However, if colonies had a lot of large and medium-sized females, those females snatched the most prey and fought the most over captured insects, making for somewhat more aggressive colonies.

After returning from the field, the students learned from previous research that group living is exceedingly rare in spiders — seen in fewer than 0.1% of species. Even so, several types of sociality are recognized by arachnologists. Nonterritorial spiders that cooperate in prey capture, web construction and brood care are the most similar to truly social animals, such as ants, honeybees and naked mole rats. 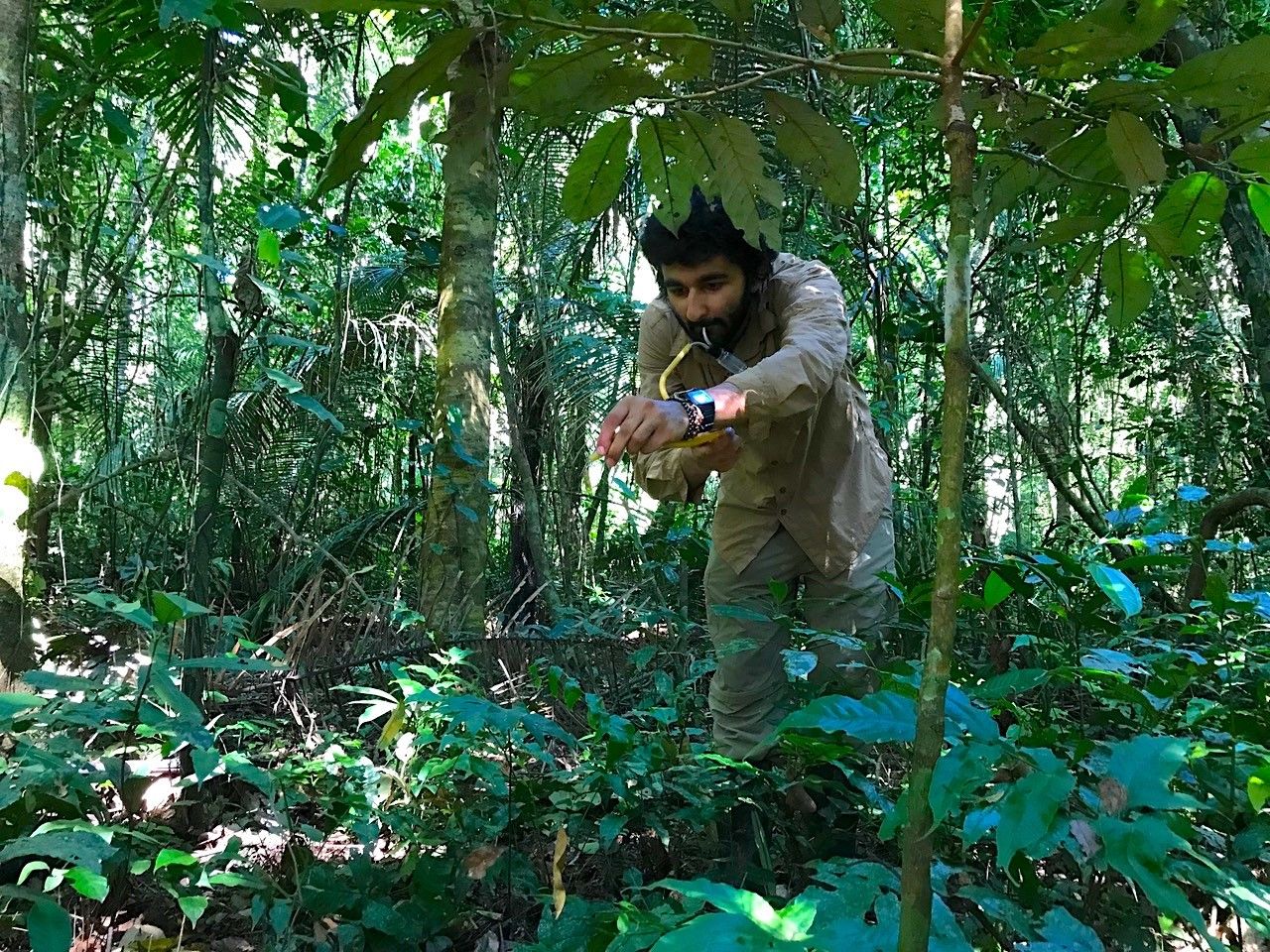 Gregory Grether/UCLA
Nihal Punjabi, who recently graduated from UCLA, was one of four undergraduate co-authors of the study.

Territorial colonial spiders, which cooperate in web construction but also compete aggressively with other residents of their own colony for food and mates, appear to have evolved multiple times from solitary species, presumably when ecological conditions favored group living. They occupy a position on the sociality continuum that is similar to group-living primates, including humans.

The student researchers have all graduated from UCLA. Wu now works in outdoor education at UCLA Recreation, Bhagawat is pursuing a master’s degree at Ghent University, and Goldman and Punjabi are medical students at the Carle Illinois College of Medicine and Case Western Reserve University, respectively.

Grether has been leading groups of UCLA undergraduates to tropical rainforests for field research training since 2001. He plans to return to Cocha Cashu to unveil more of its secrets with a new group of students in January 2023.