The UCLA School of the Arts and Architecture has received a $20 million gift from renowned art dealer and influential contemporary art world figure Margo Leavin to rebuild and expand its aging graduate art studio facilities. The complex will be renamed the UCLA Margo Leavin Graduate Art Studios.

Leavin’s gift is the largest single gift ever given by an alumna to the arts within the UC system. It will help ensure that the UCLA Department of Art, the No. 2-ranked graduate fine arts program in the nation, can sustain its preeminence and enhance its ability to deliver the highest caliber education and training.

“In Los Angeles, we have had and continue to have one of the most prolific and inspiring group of artists of our time,” Leavin said. “Alongside the city’s other outstanding art schools, UCLA’s role in creating and cultivating a multigenerational community is undeniable. I am grateful to be in the position to contribute and hope that my lead gift will inspire others to join me in supporting the construction of the graduate art studios so that we can give artists the environment, facilities, and support they deserve. It’s time to get back to the basics — without artists there would be no art world.”

The project, which is subject to approval by the UC Board of Regents, will rebuild the community of studios comprising the program’s core and also augment the original building, a former wallpaper factory in Culver City, with program-specific new construction that will greatly enhance the capabilities of the facility. When complete, the resulting 38,000-square-foot building will increase useable space by 40 percent. The new studios will also include public exhibition space and an artist-in-residence studio that will further enrich the department’s engagement with the arts community locally and globally.

“A gift like Margo’s goes a long way towards helping us ensure that the future of the arts is strong at UCLA,” said David Roussève, interim dean of the UCLA School of the Arts and Architecture. “This remarkable project will be a milestone that our institution will celebrate for decades to come. But, our work is not done. Margo’s gift brings into even sharper focus than ever before our need to secure support that will ensure that our students and faculty in the arts have the support they need to thrive.”

“Margo Leavin’s historic gift will help position our students and faculty to continue their pioneering work in the arts over UCLA’s second century as one of the world’s top institutions,” UCLA Chancellor Gene Block said. “From the birth of the Internet, to the first open heart surgery, to groundbreaking research that is helping eradicate HIV worldwide, UCLA has helped foster and nurture some of the greatest thinkers and researchers of our time. This is true across all fields of study, particularly the arts, where the creative advances and cultural influence of our faculty, students and alumni are truly extraordinary.”

Block, Roussève and Steve Olsen, UCLA vice chancellor and chief financial officer, will present the proposal to the regents on Tuesday.

A significant and steady force in the Los Angeles contemporary art scene, Leavin was instrumental in the city’s transformation into a world-class global center for contemporary art. Leavin, who received a degree in psychology from UCLA in 1958, began as a private dealer in 1967, initially specializing in prints by contemporary artists such as Jasper Johns and Claes Oldenburg. In 1970, Leavin opened the Margo Leavin Gallery on Robertson Boulevard. In 1976, she was joined by Wendy Brandow, who returned in the mid-80s to become a partner. With a reputation as a shrewd but warm businesswoman, Leavin presided with Brandow over what became one of the most respected and enduring contemporary art galleries in Los Angeles for more than four decades. From 1970 to its closing in 2012, Margo Leavin Gallery presented more than 500 exhibitions, 400 of which were solo shows for a roster of artists that included Oldenburg, Johns, as well as John Baldessari, Lynda Benglis, John Chamberlain, Roy Dowell, Donald Judd, Ellsworth Kelly, Joseph Kosuth, William Leavitt, Sherrie Levine, Agnes Martin, Martin Puryear, Allen Ruppersberg, Alexis Smith, David Smith, and many others.

“Right from the start, Margo set the bar high for herself, her gallery and for Los Angeles,” said Lari Pittman, distinguished professor in the department of art. “Ambitious and passionately civic-minded, her leadership in cultivating artists and their work put Los Angeles on the international cultural map. Now she leads again with her generous gift to build UCLA’s new graduate studios, sending a message and challenge to all, that investing in the education of young artists is the best way to set the bar high, again!”

Leavin has always been dedicated to supporting work of both established and emerging artists. This gift brings Leavin back to her roots — to campus and to the core of what her life’s work has been all about — championing artists and their process. Her gift to UCLA promises to expand and deepen a lifelong commitment to the arts and will ensure that exemplary, daring contemporary art continues to flourish in Los Angeles for generations to come. 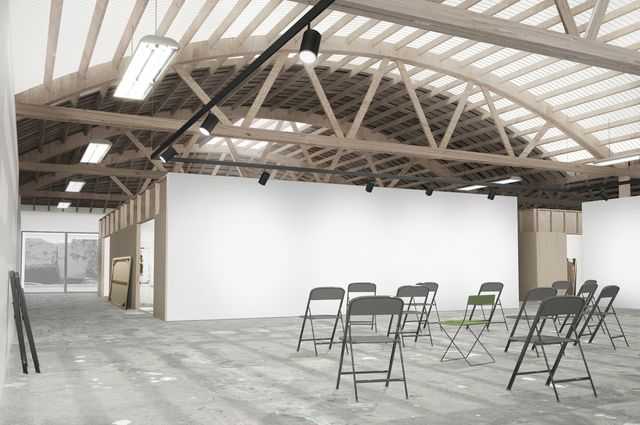 Johnston Marklee
Rendering of the view of the center bay critique space and the surrounding studio in the renovated warehouse.

Designed by Los Angeles architectural firm Johnston Marklee, the new studios will enhance UCLA’s graduate art program with an architectural identity commensurate with its distinguished faculty and talented students. Building upon their initial study, which was made possible by a planning grant from the Broad Art Foundation, Johnston Marklee’s design, developed through dialogue with faculty and students, respects and honors the practice of making art in all its forms while maintaining the dynamic and industrial character of the existing building.

“Conceived as a collection of interwoven neighborhoods for independent work, collaboration, teaching, and social space, the renovation and expansion of the graduate art studios will function much like a microcosm of the surrounding city fabric,” said Sharon Johnston of Johnston Marklee. “The underdetermined quality of the spaces — including a covered, outdoor arcade, garden and sculpture yards — will support the wide-ranging art-making practices that distinguish the UCLA graduate program.”

“Our approach to this project is driven by the structure of UCLA’s notable M.F.A. curriculum, with its focus on six core disciplinary practices,” Mark Lee of Johnston Marklee further explained. “Our design creates a flexible atmosphere of studios, labs, classrooms and communal spaces to support artistic exploration and experimentation across physical and curricular boundaries. The UCLA Department of Art is distinguished globally for the caliber of its program — it is our hope that this project will further strengthen the program as we build a creative and robust learning environment for future generations of graduate art students.”

The UCLA Margo Leavin Graduate Art Studios project is vital to UCLA’s larger effort to help maintain and bolster the university’s preeminence in the arts. Leavin’s $20 million donation is part of the $4.2 billion UCLA Centennial Campaign, which will ensure the university’s continued excellence in all areas. The project’s projected completion date coincides with UCLA’s centennial year in 2019.