From their first appearance in Marvel Comics in the 1960s, Ant-Man and the Wasp — comic book characters who were also featured in a major motion picture earlier this year — have wowed readers with their superpowers. But Ant-Man’s ability to change sizes and the Wasp’s capacity for emitting bio-electric energy blasts from her stinger are — obviously — pure science fiction.

“We often find concepts that were first imagined in science fiction writing appearing in contemporary science and technology,” said Adam Stieg, a UCLA research scientist and an associate director of CNSI. “Science fiction is a fantastic inspiration for the next generation of innovators. It explores concepts that spark the imagination and just might become reality down the road.”

The series is hosted by John Urschel, a former NFL player and current doctoral student in applied mathematics at the Massachusetts Institute of Technology. In the new episode, Stieg and a few CNSI colleagues give Urschel hands-on demonstrations of key nanoscience principles involved in energy discharge and material surface behaviors and explain nanoscale imaging.

Nanoscientists’ research is focused on matter at the atomic and molecular scales — a nanometer is one-billionth of a meter, or about one ten-thousandth the thickness of a human hair.

At CNSI, chemists, life scientists, mathematicians, physicists and engineers conduct research on a wide range of subjects. Among them: how nanoparticles could be used to deliver chemotherapy to highly specific targets in the body, and how nanotechnology is helping create portable, ultra-efficient supercapacitors that store energy for use in electric vehicles and mobile devices.

In the Marvel world, supercapacitors built using nanomaterials could theoretically explain some of the Wasp’s amazing powers, because of their ability to store energy for on-demand use and because they do not lose storage capacity over time.

“Supercapacitors can both be charged and discharge energy very rapidly,” Stieg said. “This rapid discharge could be imagined as a way in which the Wasp might produce her stings — basically as electromagnetic pulses, similar to lightning.”

Urschel also meets with materials scientist Rita Blaik, who co-leads CNSI’s education program with Sarah Tolbert, a professor of chemistry and biochemistry. Blaik demonstrates some of the science behind the Wasp’s suit, which is highly water repellent, or superhydrophobic.

“Superhydrophobicity is actually found in plants — when you drop water onto a lotus leaf, it rolls right off,” Blaik said. “But it’s not just plants that exhibit this property; insects do as well — as could be in the case of the Wasp. The nanoscale texture on a surface can lead to dramatic changes in some physical properties and, in some instances, create a superhydrophobic surface.”

Ant-Man’s signature superpower, of course, is his ability to shrink to a size not visible to the human eye. That’s where some of CNSI’s cutting-edge microscopes could come in handy.

Laurent Bentolila, the scientific director of CNSI’s Advanced Light Microscopy and Spectroscopy Laboratory, speaks with Urschel in the video about how CNSI’s high-powered microscopes enable scientists to see biological activity at the cellular level. For example, CNSI scientists have used a light sheet microscope to not only watch zebrafish’s hearts pumping blood in real time, but also to tag and identify the cells and their components. To do that, they exposed the fish’s cells and cell compartments to dye that glows in response to lasers emitted by the microscope. 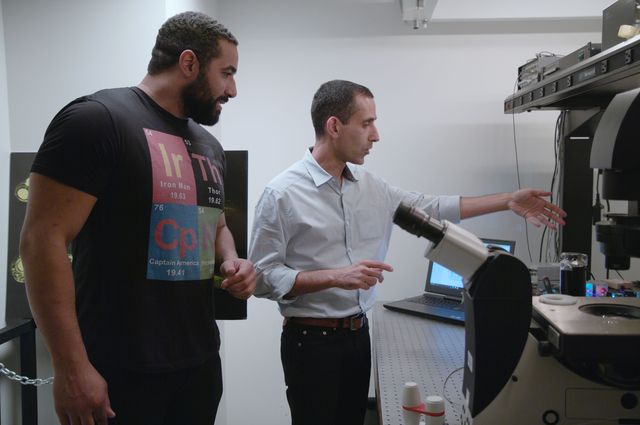 “With our technology, we can ‘paint’ cells like neurons and immune cells with different glowing dyes, shine the lasers on them, and see how they interact with each other,” Bentolila said. “You can think of this as a GPS system that can track every cell in time and space — and would even be able to track Ant-Man.”

Beyond explaining the connections between their work and comic book heroes, UCLA nanotechnology experts make their field accessible to local K-12 teachers through CNSI’s year-round education program, which features content developed by UCLA graduate students, postdoctoral researchers and faculty. Some experiments shown in the webisode are also taught to Los Angeles Unified School District teachers through the program and become part of their course curriculum, with CNSI providing supplies for the classroom experience.

The education program also reaches the general public through partnerships with the California Science Center and other institutions.

“Educating the next generation of scientists and engineers is a part of our mission at CNSI,” Blaik said. “We want to show people of all ages that science isn’t something to be afraid of and that learning about complex science topics like nanotechnology can be fun.”