A UCLA-led team of scientists has developed a new technique that will enable researchers to easily and quickly determine the structures of organic molecules using very small samples.

The work is already drawing significant attention in the scientific community: A preview of the paper that was posted on the website ChemRxiv was downloaded 19,000 times in 24 hours, shattering the site’s previous record of 15,000 downloads in six months.

The final paper, which was published in ACS Central Science, describes a new method for using electron microscopes to examine small molecules. The approach enables scientists to analyze nanocrystals, which are so small that they can only be seen using special electron microscopes, and identify them within about 30 minutes, instead of the several hours that the current process takes.

Christopher Jones, a UCLA chemistry and biochemistry graduate student and the study’s lead author, said the fact that the process works so well with “small” molecules — those that are composed of only a few hundred atoms or less, as opposed to “large” ones, which can be made up of hundreds of thousands — is significant because small molecules are key ingredients to the overwhelming majority of pharmaceuticals on the market today. The molecules’ extra-small size allows them to more easily penetrate tightly packed cell membranes to reach their targets in the body.

In addition, Jones said, the new process can work with “vanishingly small” quantities of sample. Previously, for scientists using X-rays, the same type of information could only be gleaned from samples the size of a grain of sand. With electron microscopy, samples one-millionth or even one-billionth that size can be used. 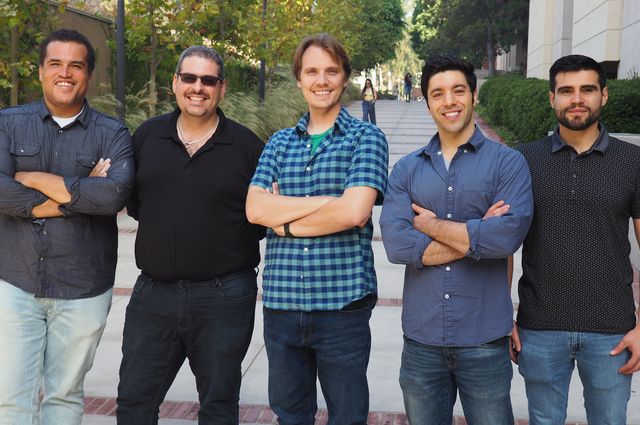 Penny Jennings/UCLA
Among the UCLA researchers who contributed to the study are (from left) Hosea Nelson, Tamir Gonen, Michael Martynowycz, Christopher Jones and Jose Rodriguez.

“Using this technique, the speed at which we can formulate potentially life-saving drugs will be greatly accelerated,” said Hosea Nelson, a UCLA assistant professor of chemistry and biochemistry and a senior author of the research. “It will be like going from riding a tricycle to driving a Ferrari.”

Ultimately, the technique could accelerate processes for drug development because pharmaceutical companies would be able to screen more samples faster than ever before, which would reduce the time it takes to verify the molecular structure of potential drugs.

Among the words of praise from scientists and media:

“As chemists, we typically devote so much time to interpreting complex spectral data to identify our compounds,” Jones said. “While developing this technique, I was amazed at how rapidly we could obtain high resolution, unambiguous chemical structures of organic molecules.”

Other UCLA authors are Tamir Gonen, professor of biological chemistry and physiology, and a Howard Hughes Medical Institute investigator; and Jose Rodriguez, assistant professor of chemistry and biochemistry, who holds the Howard Reiss Career Development Chair.

The paper’s other senior author is Brian Stoltz, a Caltech chemistry professor. Other co-authors are Michael Martynowycz, a UCLA postdoctoral scholar; Johan Hattne, a UCLA researcher; and Tyler Fulton, a Caltech graduate student.