UCLA Health’s Operation Mend, a program for wounded U.S. veterans, celebrated its 10th anniversary at a Red, White and Denim-themed backyard party that raised more than $1.1 million to benefit the program.

The celebration was held at the home of Operation Mend founder and philanthropist Ronald Katz on Sept. 24. Nearly 600 guests attended, including 53 veterans who have been treated through the program and their caregivers. Operation Mend provides free surgical, medical and psychological services to wounded service members injured in the line of duty after the Sept. 11, 2001, terrorist attacks in the United States.

“Operation Mend’s 10th Anniversary Celebration was an important marker of UCLA Health’s commitment to healing our nation’s wounded warriors,” said Johnese Spisso, president of UCLA Health and CEO of the UCLA Hospital System. “Chancellor Gene Block, Dr. John Mazziotta, and all of us at UCLA are grateful to the Katz family for welcoming the entire Operation Mend team to their home, especially the patients and their families, who, along with our generous sponsors and donors, are deeply committed to this program.”

A highlight of the evening’s program was a series of 10 stories shared by Operation Mend patients and family members, one for each year of the program’s history.

U.S. Army Sgt. Karolyn Smith, an Operation Mend patient who underwent a successful spine surgery at UCLA, told the audience that the program has helped her thrive.

“After years of chronic debilitating pain, and another five years on opioids, I was losing hope and quickly coming closer to being one of the 22 veterans a day that we lose to suicide,” said Smith, who was injured in Iraq in 2005 when an improvised explosive device struck her truck. “In 2015, I found Operation Mend and not only did they save my life, but they showed me what real care actually looks like.” 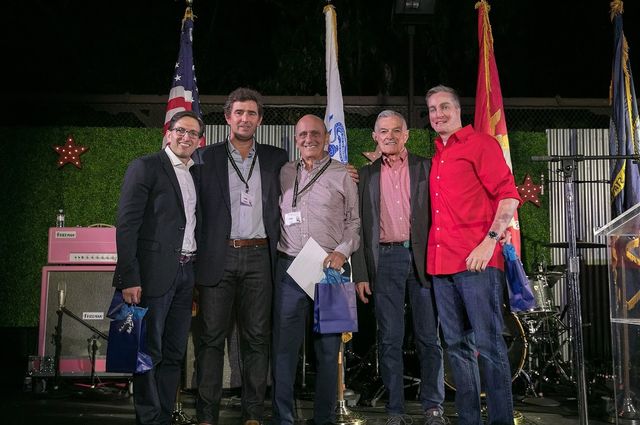 Christina Geist, a New York City-based brand strategist, children's book author and entrepreneur, was a surprise honoree, recognized by program director Melanie Gideon for her ongoing work creating a broad network of support for Operation Mend on the East Coast.

The money raised is part of the $4.2 billion UCLA Centennial Campaign, which is scheduled to conclude in December 2019 during UCLA’s 100th anniversary year.

Founded in 2007, Operation Mend is a collaboration between UCLA Health in Los Angeles, the U.S. military and the Department of Veterans Affairs to help treat the wounds of war. Operation Mend provides advanced surgical and medical treatment and comprehensive psychological health support. It also offers advanced diagnostics and treatment planning for patients with symptoms of mild traumatic brain injury and PTSD through the Warrior Care Network, a collaboration between Wounded Warrior Project, UCLA and three academic medical center partners. Operation Mend is available to eligible warriors injured during combat operations or while training for service. All medical care, travel and accommodations are provided at no cost to participants and their families.

To learn more or to donate, please visit www.operationmend.ucla.edu.