Regardless of race, ethnicity and even political party preference, two separate UCLA-led surveys reveal that majorities of people in each group support access to legal abortion in the United States.

Data from The Democracy Fund + UCLA Nationscape Project, led by Vavreck and Tausanovitch show broad support for abortion across political party lines. Nationscape was a weekly survey fielded from July 2019 through January 2021, reaching nearly 500,000 voters and non-voters representative of the U.S. adult population.

Most Democrats and Republicans — as well as independents — said they do not think abortion should be outlawed completely. 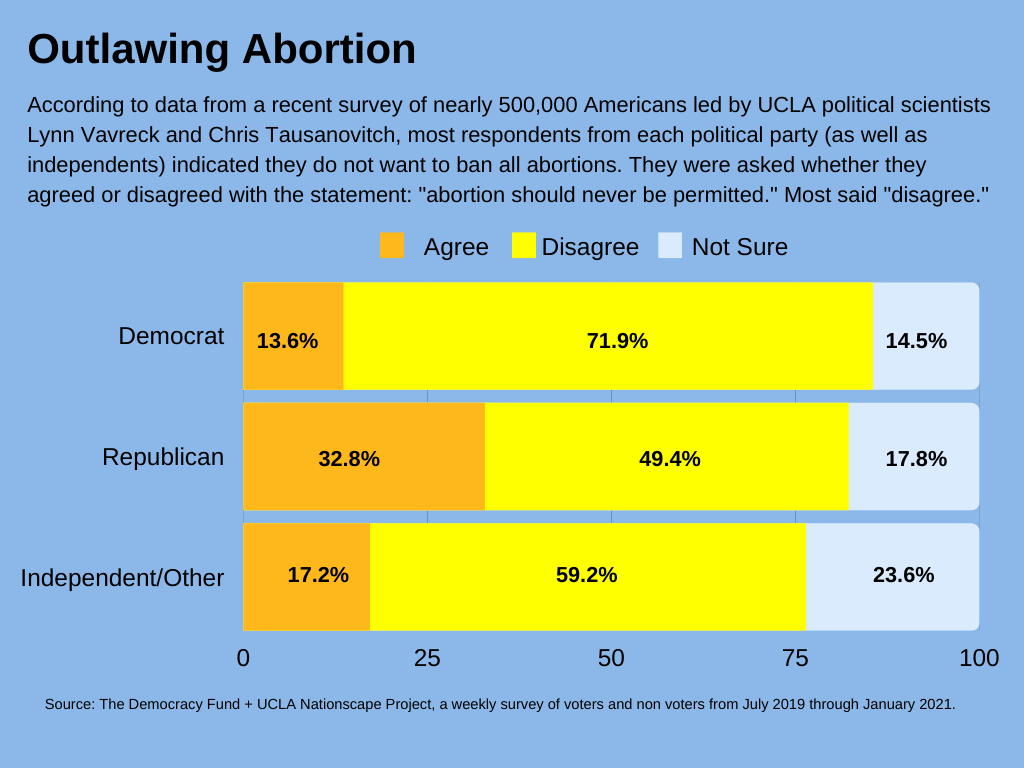 And, according to Nationscape data, most also agreed that abortion should not be limited only to instances of rape, incest or threat to the life of the mother. 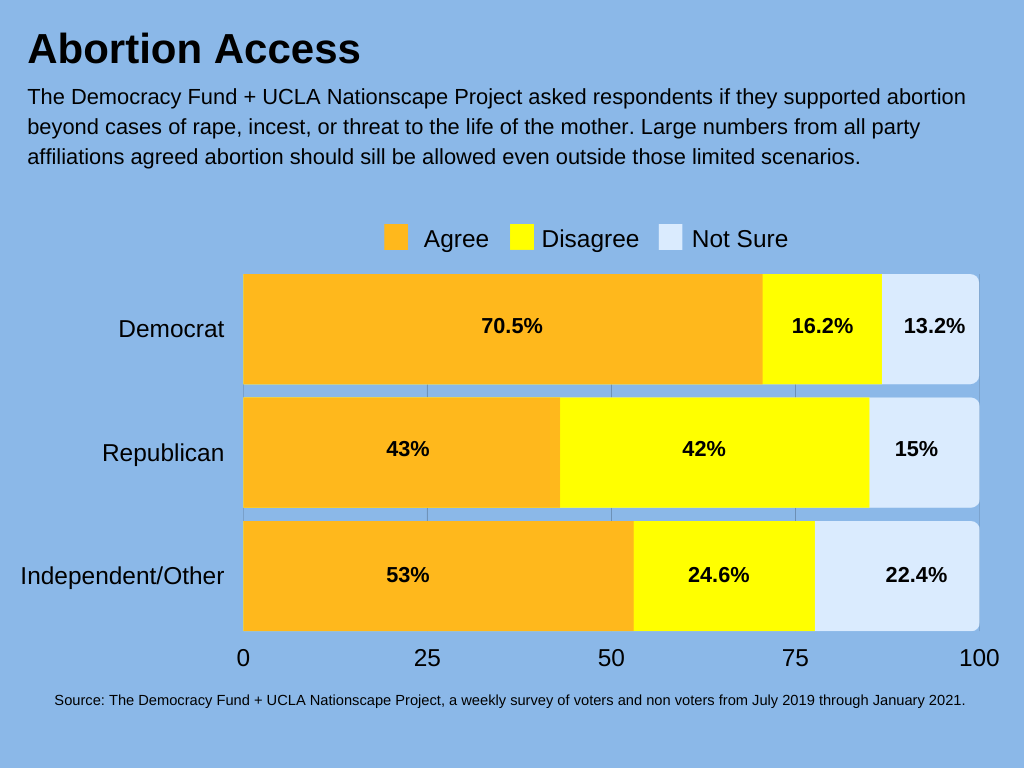 Despite the two major political parties’ platforms generally taking opposing positions on abortion — Democrats support, Republicans oppose — there are people aligned with the Republican party who support legal abortion and people aligned with the Democratic party who oppose abortion. But for these cross-positioned voters, it’s important to note that abortion is not their biggest priority, Vavreck said.

Nationscape researchers know this because of a unique approach they employed to test what matters most to the electorate, essentially forcing survey respondents to make choices based on groupings of hot-button topics. The survey included 44 different policy statements and 8 hypothetical attributes of political candidates. A set of these statements were randomized into two groups of options. Survey respondents were asked to choose which group most aligned with their priorities.

For example, a Democrat who opposes legal abortion might be faced with two groupings of policy statements — one that included limiting or ending abortion. But, if the other group of policy statements held items that were more important to that person, like not deporting undocumented immigrants, they would select that option. The same held true the other way for Republicans who support legal abortion. If the other bucket of topics included things they cared more about than abortion, that was their choice.

“This happens on other issues beside abortion too, and what this tells us is that these voters and potential voters are not cross-pressured within their party. They’re not torn. They just have other priorities — they are cross-positioned, but not cross-pressured,” Vavreck said. “These surveys demonstrate that vast majorities support keeping abortion legal but that doesn’t necessarily mean that this issue is going to be pivotal to their vote choice.”

The fourth and largest installment of the Collaborative Multiracial Post-Election Survey, or CMPS, led by Frasure and Barreto, alongside Janelle Wong from University of Maryland, College Park, and Edward Vargas from Arizona State University, asked several questions about abortion, reporting results based on the race of respondents.

This survey is conducted after every presidential election, and its questions are drafted by a broad consortium of race and ethnicity politics scholars from across the United States. In 2020, the CMPS was offered in 10 languages to nearly 15,000 respondents.

Overall, majorities from all groups reported they either support legal abortion or are neutral on the issue, with broad margins of support across all racial and ethnic groups. 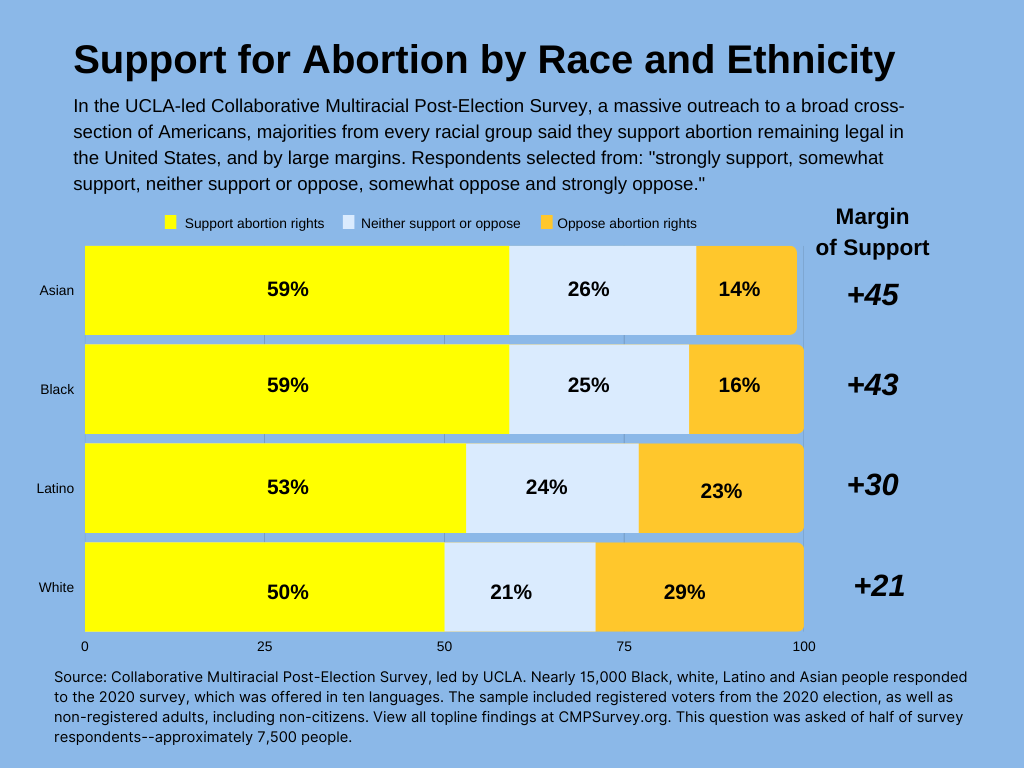 “Although the CMPS data was collected before news of the Supreme Court leak, it nonetheless reaffirms what decades of public opinion research has found —across every racial and ethnic group, Americans support safe and legal access to abortion,” said Barreto, who added that there are very low rates of opposition to abortion rights for women.

When asked if limiting abortion was a specific priority for their racial community, most respondents said that it was a low priority. 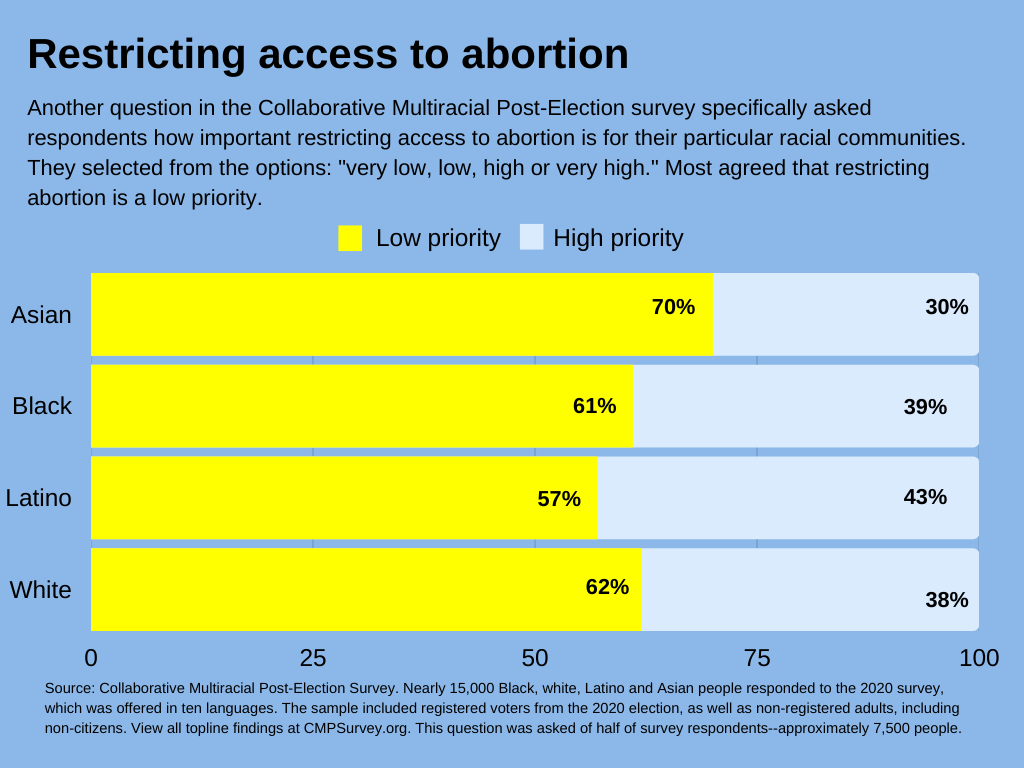