A study by UCLA researchers is the first to demonstrate a technique for coaxing pluripotent stem cells — which can give rise to every cell type in the body and which can be grown indefinitely in the lab — into becoming mature T cells capable of killing tumor cells.

The technique uses structures called artificial thymic organoids, which work by mimicking the environment of the thymus, the organ in which T cells develop from blood stem cells.

T cells are cells of the immune system that fight infections, but also have the potential to eliminate cancer cells. The ability to create them from self-renewing pluripotent stem cells using the UCLA technique could lead to new approaches to cancer immunotherapy and could spur further research on T cell therapies for viral infections such as HIV, and autoimmune diseases. Among the technique’s most promising aspects is that it can be combined with gene editing approaches to create a virtually unlimited supply of T cells able to be used across large numbers of patients, without the need to use a patient’s own T cells.

The study, which was published in the journal Cell Stem Cell, was led by senior author Dr. Gay Crooks, a professor of pathology and laboratory medicine and of pediatrics and co-director of the Eli and Edythe Broad Center of Regenerative Medicine and Stem Cell Research at UCLA.

T cell therapies, including CAR T-cell therapy, have shown great promise for treating certain types of cancer. Current approaches involve collecting T cells from a patient, genetically engineering the T cells with a receptor that helps them recognize and destroy cancer cells, and then infusing the cells back into the patient. But engineered T cells do not always function well, treatment is expensive because it is tailored to each patient, and some people with cancer don’t have enough T cells to undergo the therapy.

Therefore, a technique that produces T cells without relying on collecting them from patients is an important step toward making T cell therapies more accessible, affordable and effective.

“What’s exciting is the fact that we start with pluripotent stem cells,” said Crooks, who also is director of the Cancer and Stem Cell Biology Program at the UCLA Jonsson Comprehensive Cancer Center. “My hope for the future of this technique is that we can combine it with the use of gene editing tools to create ‘off-the-shelf’ T cell therapies that are more readily available for patients.” 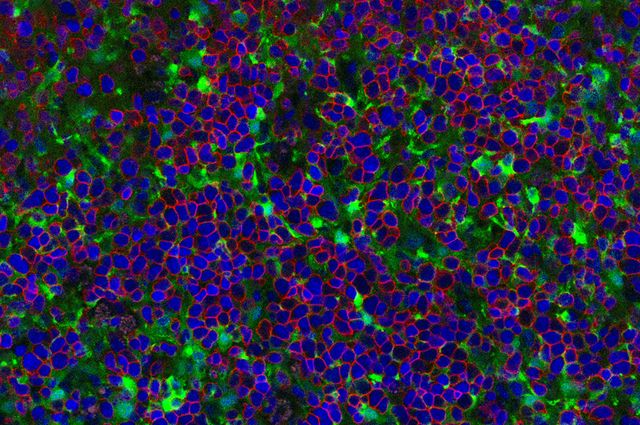 Other researchers have been only partially successful in their attempts to generate T cells using methods that involve combining pluripotent stem cells with a layer of supporting cells. But the T cells produced in those previous studies did not mature to become fully functional T cells.

Crooks and her team previously demonstrated that the 3D structure of an artificial thymic organoid allowed mature T cells to develop from adult blood stem cells, and hypothesized that they would also support mature T cell production from pluripotent stem cells.

“The 3D structure of the artificial thymic organoid seems to provide the right supportive signals and environment needed for mature T cells to properly develop,” she said.

“Once we create genetically edited pluripotent stem cell lines that can produce tumor-specific T cells in artificial thymic organoids, we can expand those stem cell lines indefinitely,” said Amélie Montel-Hagen, the study’s first co-author and an associate project scientist in Crooks’ lab. Having an unlimited supply of T cells capable of fighting various types of tumors would be a major turning point for cancer treatment.

One of the remaining challenges for the UCLA scientists is that the T cells created using the artificial thymic organoids have additional molecules on their surface that are not matched to each individual patient. Those extra molecules could cause a patient’s body to reject the transplanted cells, Montel-Hagen said.

“Our next step will be to create T cells that have the receptors to fight cancer but do not have the molecules that cause the rejection of the cells, which would be a major step toward the development of universal T cell therapies,” said Dr. Christopher Seet, the study’s first co-author and a clinical instructor in the division of hematology-oncology at UCLA.

Kite, a Gilead Company, holds a license to the artificial thymic organoid method for cancer therapy, which is patented by the Regents of the University of California. The method is not yet available in clinical trials and has not been approved by the FDA for use in humans.