UCLA physicists have pioneered a method for creating a unique new molecule that could eventually have applications in medicine, food science and other fields. Their research, which also shows how chemical reactions can be studied on a microscopic scale using tools of physics, is reported in the journal Science.

For the past 200 years, scientists have developed rules to describe chemical reactions that they’ve observed, including reactions in food, vitamins, medications and living organisms. One of the most ubiquitous is the “octet rule,” which states that each atom in a molecule that is produced by a chemical reaction will have eight outer orbiting electrons. (Scientists have found exceptions to the rule, but those exceptions are rare.)

But the molecule created by UCLA professor Eric Hudson and colleagues violates that rule. Barium-oxygen-calcium, or BaOCa+, is the first molecule ever observed by scientists that is composed of an oxygen atom bonded to two different metal atoms.

Normally, one metal atom (either barium or calcium) can react with an oxygen atom to produce a stable molecule. However, when the UCLA scientists added a second metal atom to the mix, a new molecule, BaOCa+, which no longer satisfied the octet rule, had been formed. 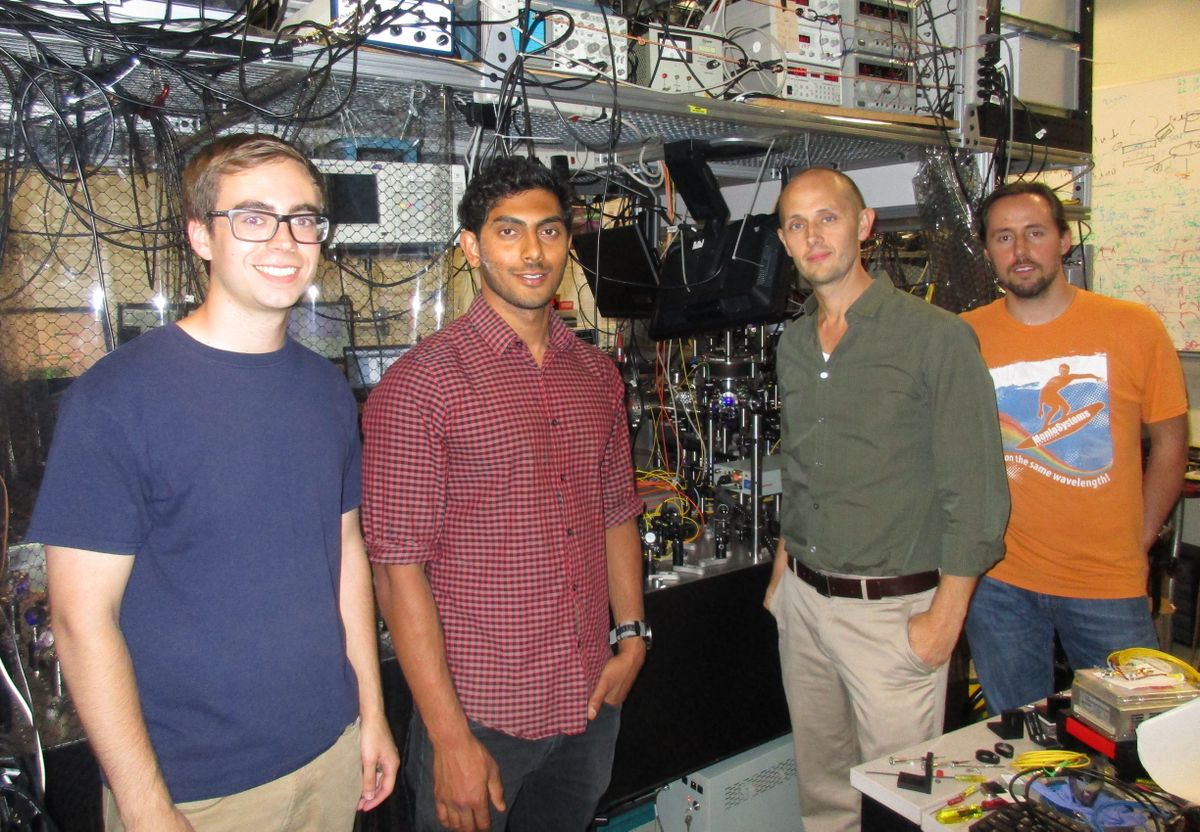 Other molecules that violate the octet rule have been observed before, but the UCLA study is among the first to observe such a molecule using tools from physics — namely lasers, ion traps and ultra-cold atom traps.

Hudson’s laboratory used laser light to cool tiny amounts of the reactant atoms and molecules to an extremely low temperature — one one-thousandth of a degree above absolute zero — and then levitate them in a space smaller than the width of a human hair, inside of a vacuum chamber. Under these highly controlled conditions, the scientists could observe properties of the atoms and molecules that are otherwise hidden from view, and the “physics tools” they used enabled them to hold a sample of atoms and observe chemical reactions one molecule at a time.

The ultra-cold temperatures used in the experiment can also be used to simulate the reaction as it would occur in outer space. That could help scientists understand how certain complex molecules, including some that could be precursors to life, came to exist in space, Hudson said.

The researchers found that when they brought together calcium and barium methoxide inside of their system under normal conditions, they would not react because the atoms could not find a way to rearrange themselves to form a stable molecule. However, when the scientists used a laser to change the distribution of the electrons in the calcium atom, the reaction quickly proceeded, producing a new molecule, CaOBa+.

The approach is part of a new physics-inspired subfield of chemistry that uses the tools of ultra-cold physics, such as lasers and electromagnetism, to observe and control how and when single-particle reactions occur.

UCLA graduate student Prateek Puri, the project’s lead researcher, said the experiment demonstrates not only how these techniques can be used to create exotic molecules, but also how they can be used to engineer important reactions. The discovery could ultimately be used to create new methods for preserving food (by preventing unwanted chemical reactions between food and the environment) or developing safer medications (by eliminating the chemical reactions that cause negative side effects).

“Experiments like these pave the way for developing new methods for controlling chemistry,” Puri said. “We’re essentially creating ‘on buttons’ for reactions.”

Hudson said he hopes the work will encourage other scientists to further narrow the gap between physics and chemistry, and to demonstrate that increasingly complex molecules can be studied and controlled. He added that one key to the success of the new study was the involvement of experts from various fields: experimental physicists, theoretical physicists and a physical chemist.

A key player in the research is already making a name for itself in Hollywood. A device called the integrated ion-trap-time-of-flight mass spectrometer, which was invented by Hudson’s lab and which was used to discover the reaction — was featured on a recent episode of the sitcom “The Big Bang Theory.”

“The device enables us to detect and identify the products of reactions on the single-particle level, and for us, it has really been a bridge between chemistry and physics,” said Michael Mills, a UCLA graduate student who worked on the project. “We were delighted to see it picked up by the show.”

The research was funded by the National Science Foundation and Army Research Office.