UCLA sophomore Luke Mostert would like to own his own business someday, like many enterprising 20-year-olds. What sets him apart from other motivated students is that he already owns 20 percent of the company he helped launch, SOSA Investments.

For the South African native and his partners business isn’t just about money. It’s also about doing good. That’s why SOSA’s first initiative is donating solar-powered lights to impoverished South African school children to prevent the deadly kerosene-lantern fires that can destroy the informal shack-settlements where they live. Electricity is rare in the lean-to shacks, so despite the danger, when the sun goes down the students must risk open flames to finish their homework.

“The shack fires caused by lanterns in neighborhoods without electricity are in the news constantly at home, and at the same time, I’ve always been interested in renewable energy,” Mostert said. “My friends and I saw the problem, and we saw a solution.”

Together, the five friends built a company and attracted funding to help them both donate the solar lanterns, and to sell them to others as a way to raise money for more donations. They launched their awareness campaign in November, and made their first donation of 47 lights to a children’s home in December. The young company is already looking to expand into other renewable technologies to fulfill their mission of solving social problems with sustainable solutions. Consequently, Mostert juggles classwork at UCLA with pitches to corporate social responsibility executives.

“When I spend five hours on SOSA, it’s five hours away from econ-11 and midterm practice,” Mostert acknowledged. “But ultimately, I can’t put an educational price on the business experience I’m getting.”

Mostert became involved early last summer, shortly after his freshman year. Though attending UCLA took him far from home, he stayed in touch with high school friends. It was 2016 when several of his former classmates snapped up the rights to sell a solar-powered light in South Africa. But once they had the Solar Puff, they weren’t sure how to move forward, Mostert said. 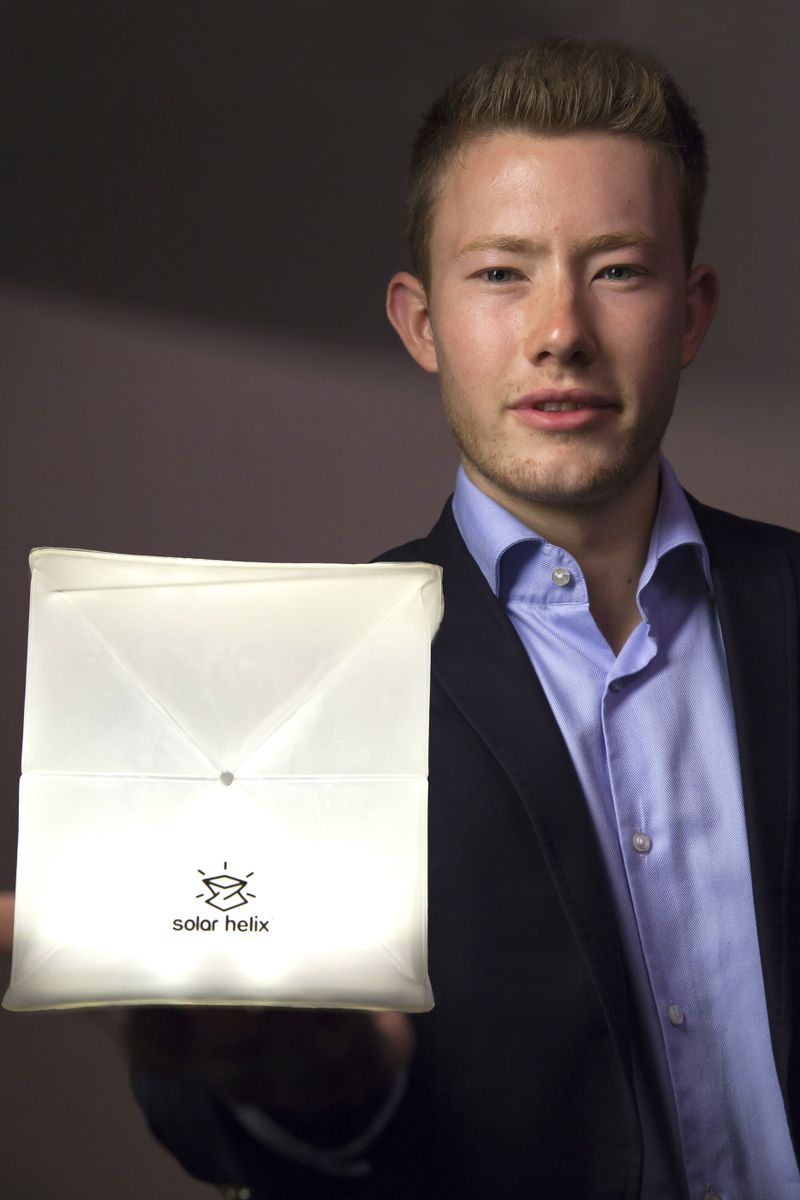 Meanwhile, Mostert had been taking a wide range of ecologically focused classes, like geography, oceanography and global studies. He dabbled in economics before selecting a major in political science, with a tentative minor in global studies. His class with UCLA’s well-known geography professor Thomas Gillespie left him particularly inspired, and when he found hours of educational videos by Gillespie online, he dove into issues like species conservation and rainforest protection.

Mostert had also begun learning ways to start a company through the university’s entrepreneurship program, Startup UCLA. He enjoyed attending talks by company founders who described their challenges, and he grew increasingly attached to the idea of creating a business that would harness renewable energy to solve societal problems. When his friends began talking about their new solar lantern, he was already in a position to act.

“When I heard about the Solar Puff, I set up a meeting with my friends and told them we should move aggressively,” Mostert said. With three partners in South Africa and one in New York, they wrote a business plan and began to build a brand, a presence and a mission. “That was last summer. We looked into making a video campaign and websites and all that. We took the Facebook page from 70 likes to more than a thousand.”

They developed ideas for a video that they launched on Nov. 30 with help from a South African celebrity, Deon Bing, who narrated and produced it. The video turns their mission into a story.

“We saw there was a big problem, and we started to link that with education,” Mostert said. “These kids go home, and the sun goes down, but they need light to do homework. Their only alternative are these paraffin lights, which emit toxic fumes. Without good ventilation, it poisons them and knocks them out, and there’s also serious fire danger. They’re basically risking their lives to study.”

The open flames are among the reasons there are 10 shack fires a day in South Africa’s many informal settlements, Mostert continued.

“They cause so much damage. One shack burns down, and it can take 1,000 with it,” he said. “Around 8.5 million South Africans lack access to electricity, hence they will use paraffin lanterns unless they are provided with solutions. The ironic part is our lanterns pay for themselves within two to three months compared to buying paraffin every week.”

As the Los Angeles representative of SOSA Investments, Mostert seeks new corporate sponsors and hunts for the latest renewable-energy technology that could be applied to improve daily life in South Africa. His first addition to SOSA’s product line is Flux portable chargers. Coincidentally, Flux was formed by UCLA students. LifeStraw, which created a straw that filters contaminated water, is another company SOSA is interested in partnering with.

The company made its first donation to the Christine Revel Children’s Home in Cape Town, where all 47 foster children and orphans received their own lanterns. A recent success came when the international Sage Foundation partnered with them to donate 250 lanterns to five settlements. Sage also asked SOSA’s founders to speak at a recent summit in Johannesburg, and Teen Entrepreneur South Africa partnered with SOSA to assist the fledgling company with TV appearances, business advice and more.

Someday, SOSA hopes to branch into custom-manufacturing their own products — for example, their solar lantern lasts for 12 hours with a full charge, but students will only need around 6 hours of light. A better lantern might last for six hours but have a brighter light, Mostert said. Their rights to the original light would allow them to manufacture it, but ramping up a whole factory is a funding project for another day, Mostert said. And for now he’s busy enough with his current workload.

“I remember reading something Warren Buffet wrote,” Mostert said. “You write down the 25 things that are most important to you. Then you cross out the bottom 20 and keep the top five. So that’s kind of my approach. I’ve learned to focus on what’s most important.”