With many Americans choosing to eat less meat in recent years, often to help reduce the environmental effect of meat production, UCLA geography professor Gregory Okin began to wonder how much feeding pets contributes to issues like climate change.

All that meat has important consequences. Okin calculated that meat-eating by dogs and cats creates the equivalent of about 64 million tons of carbon dioxide a year, which has about the same climate impact as a year’s worth of driving from 13.6 million cars.

“I like dogs and cats, and I’m definitely not recommending that people get rid of their pets or put them on a vegetarian diet, which would be unhealthy,” Okin said. “But I do think we should consider all the impacts that pets have so we can have an honest conversation about them. Pets have many benefits, but also a huge environmental impact.” 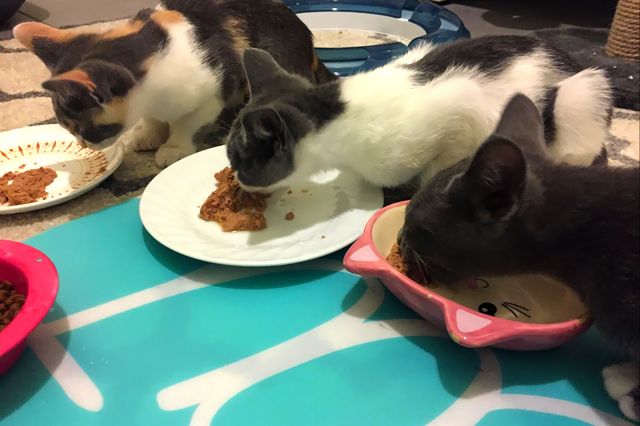 In a paper published today in the journal PLOS One, Okin says he found that cats and dogs are responsible for 25 to 30 percent of the environmental impact of meat consumption in the United States. If Americans’ 163 million Fidos and Felixes comprised a separate country, their fluffy nation would rank fifth in global meat consumption, Okin calculated, behind only Russia, Brazil, the United States and China. And it all has to go somewhere — America’s pets produce about 5.1 million tons of feces in a year, as much as 90 million Americans. If all that were thrown in the trash, it would rival the total trash production of Massachusetts — from the humans, at least.

Compared to a plant-based diet, meat requires more energy, land and water to produce, and has greater environmental consequences in terms of erosion, pesticides and waste, Okin noted. Previous studies have found that the American diet produces the equivalent of 260 million tons of carbon dioxide from livestock production. By calculating and comparing how much meat 163 million cats and dogs eat compared to 321 million Americans, Okin determined how many tons of greenhouse gases are tied to pet food.

His calculations start with publicly available information, like the number of dogs and cats in the country and the ingredients in market-leading pet foods, leading to complicated equations like the mathematical menagerie below, and producing estimates that create a starting point for conversation.

He found that the nation’s dogs and cats eat about 19 percent as many calories as the nation’s people, on par with all the calories consumed by the population of France in a year. Because dog and cat food tends to have more meat than the average human diet, this means that dogs and cats consume about 25 percent of the total calories derived from animals in the United States.

Okin, a member of UCLA’s Institute of the Environment and Sustainability, usually researches dust bowls, desert landscape dynamics and wind erosion, and how those things can impact individual ecosystems and the global climate. Pinning down the environmental impact of canine companions and feline friends was more of an — ahem — pet project that occurred to him while he was thinking about the growing trend of raising backyard chickens.

“I was thinking about how cool it is that chickens are vegetarian and make protein for us to eat, whereas many other pets eat a lot of protein from meat,” he said. “And that got me thinking — how much meat do our pets eat?”

Okin recognizes that some of the products in pet food aren’t something people should or would eat. But some of it is. In his research, he confirmed his hunch that premium pet foods usually contain more animal products than other brands, and that premium pet food purchases are increasing. As growing numbers of people consider pets less as animals and more as family members, Okin said, pampering has increased and the options for pet food with high-quality meat has kept pace. This means pets are increasingly eating cuts of meat suitable for humans.

“A dog doesn’t need to eat steak,” Okin said. “A dog can eat things a human sincerely can’t. So what if we could turn some of that pet food into people chow?”

A commitment to snout-to-tail consumption, where as much rendered product as possible is produced for human use, could significantly reduce national meat consumption. Okin estimates that if even a quarter of the meat in pet food could be consumed by humans, it would equal the amount of meat consumed by 26 million Americans, nearly the population of Texas. Okin noted that ideas about what is edible vary dramatically by culture. He also pointed to a controversy in 2012 about “pink slime,” also called lean finely textured beef. 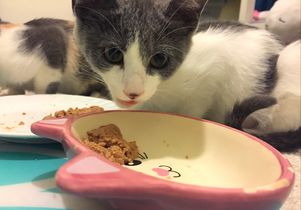 As eating less meat expands from vegetarian to environmental circles as a way to reduce one’s carbon footprint, considering what to feed pets is a natural next step, Okin said. It’s not just an issue in the United States, he noted. In places like China, Brazil and other emerging countries, as the population becomes more affluent, they’re eating more meat and they’re getting more pets.

“I’m not a vegetarian, but eating meat does come at a cost,” he continued. “Those of us in favor of eating or serving meat need to be able to have an informed conversation about our choices, and that includes the choices we make for our pets.”

He doesn’t see a simple solution. Pets provide friendship and other social, health and emotional benefits that can’t be discounted, Okin said. People concerned about meat intake could consider vegetarian pets, like birds or hamsters, he suggested. The pet food industry, he noted, is also beginning to take steps toward sustainability, and could work to reduce overfeeding and consider alternative sources of protein. But it’s a complicated issue, and where pets are concerned, Okin knows it’s important to have a sense of humor about it.

“Maybe we could all have little ponies,” he said, half-jokingly. “We’d all get more exercise taking them for walks, and they would also mow the lawn.”