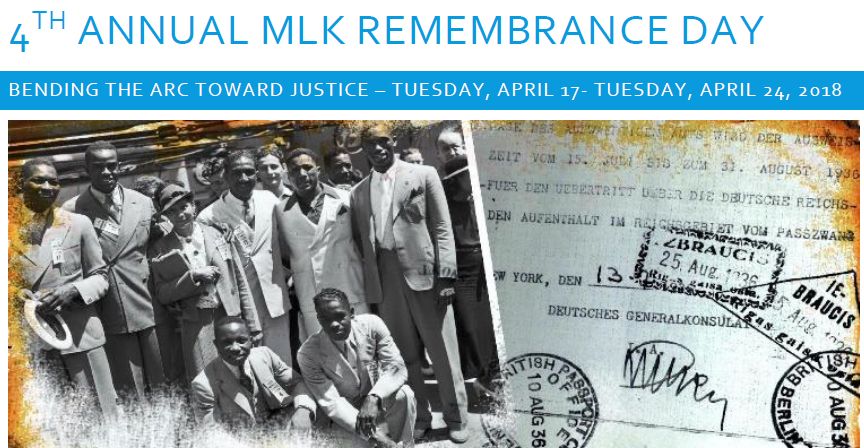 UCLA
The hundreds of students participating in Martin Luther King Jr. Remembrance Day activities will learn about the role of students and student athletes as leaders.

A week of activities commemorating Martin Luther King Jr.’s 1965 UCLA visit will kick off on April 17 with a free screening for hundreds of local students of “Olympic Pride, American Prejudice,” a documentary about the 18 African American athletes, including Jesse Owens, who competed at the 1936 Berlin Olympics.

The screening and a follow-up panel discussion, sponsored by the LA84 Foundation supporting youth sports in Los Angeles, launch a week of activities that include daily film screenings as part of the Reel Talk Film Series. Activities conclude on April 24 for UCLA’s fourth annual Martin Luther King Jr. Remembrance Day. The day features lectures, workshops, interactive activities and more as part of the university’s support of King’s legacy and its exploration of contemporary and historical social justice issues.

12:30 p.m. to 1:30 p.m., Royce Hall West
VIP luncheon celebrating Draper, the film director’s, and her work to unite the stories presented in her documentary. The event will also honor the 1936 African-American Olympians, including several with UCLA connections, like alumni James LuValle and Archie Williams, and Mack Robinson, brother of UCLA alumnus Jackie Robinson. The reception will also announce the 2018 James C. Williamson Award honorees. This award, which reflects on the many firsts and notable achievements of Bruins, is given in honor of Williamson, UCLA’s first black student-athlete.

10 a.m. to 12 p.m., various locations (events subject to change; visit the MLK Remembrance Day page on Facebook to confirm the day’s events.)
“Teaching MLK in the 21st Century”
Panels, readings and workshops hosted by campus and community experts, to engage 400 to 600 high school and college students in discussions.

12 p.m. to 1 p.m., Meyerhoff Park
Broadcast of King’s “I’ve Been to the Mountaintop” speech

1 p.m. to 3:00 p.m., James West Alumni Center’s Collins Alumni Conference Room
Alumni retrospective discussion exploring “Black Man In A Changing American Context,” a course offered in the 1967-68 academic year that was developed by Virgil Roberts, who graduated from UCLA in 1968, and others.

3 p.m. to 5 p.m., Royce Hall West
“The Reckoning of Accountability”
The inaugural Royce Hall Lecture will be delivered by William Pepper, and focus on his recent book, “The Plot to Kill King: The Truth Behind the Assassination of Martin Luther King Jr.”