Campus buzzed with graduation celebrations today fueled by crowds not seen since 2019. The return to an in-person commencement at UCLA also marks the first time the UCLA College’s undergraduate graduation was spread across three ceremonies to make room for one of UCLA’s largest graduating classes ever.

Outside Pauley Pavilion, thousands of parents and guests mingled outdoors carrying teddy bears, flowers and other gifts, as confused food-delivery robots struggled to navigate the crowd. Students in graduation gowns, leis and decorated mortarboards hugged their friends and family before dashing away to line up for the processional.

Among the dozens of graduations on campus today, the crowd outside Pauley Pavilion was the largest, with a total of about 6,100 graduates and 26,400 guests expected at the three ceremonies.

The graduates come from all over, and range in age from 18 to 79. More than 35% come from low-income families, and 36% came to UCLA as transfer students. Approximately one-third are the first generation in their families to graduate from a four-year university.

“I’ve been working toward this my whole life,” said Veronica Lavín Solano, who earned her bachelor’s in English. The first-generation student’s sash featured the flag of Mexico, where her parents immigrated from. “I’m so glad my parents get to be here in person. They are so proud of me … UCLA was my dream school.” 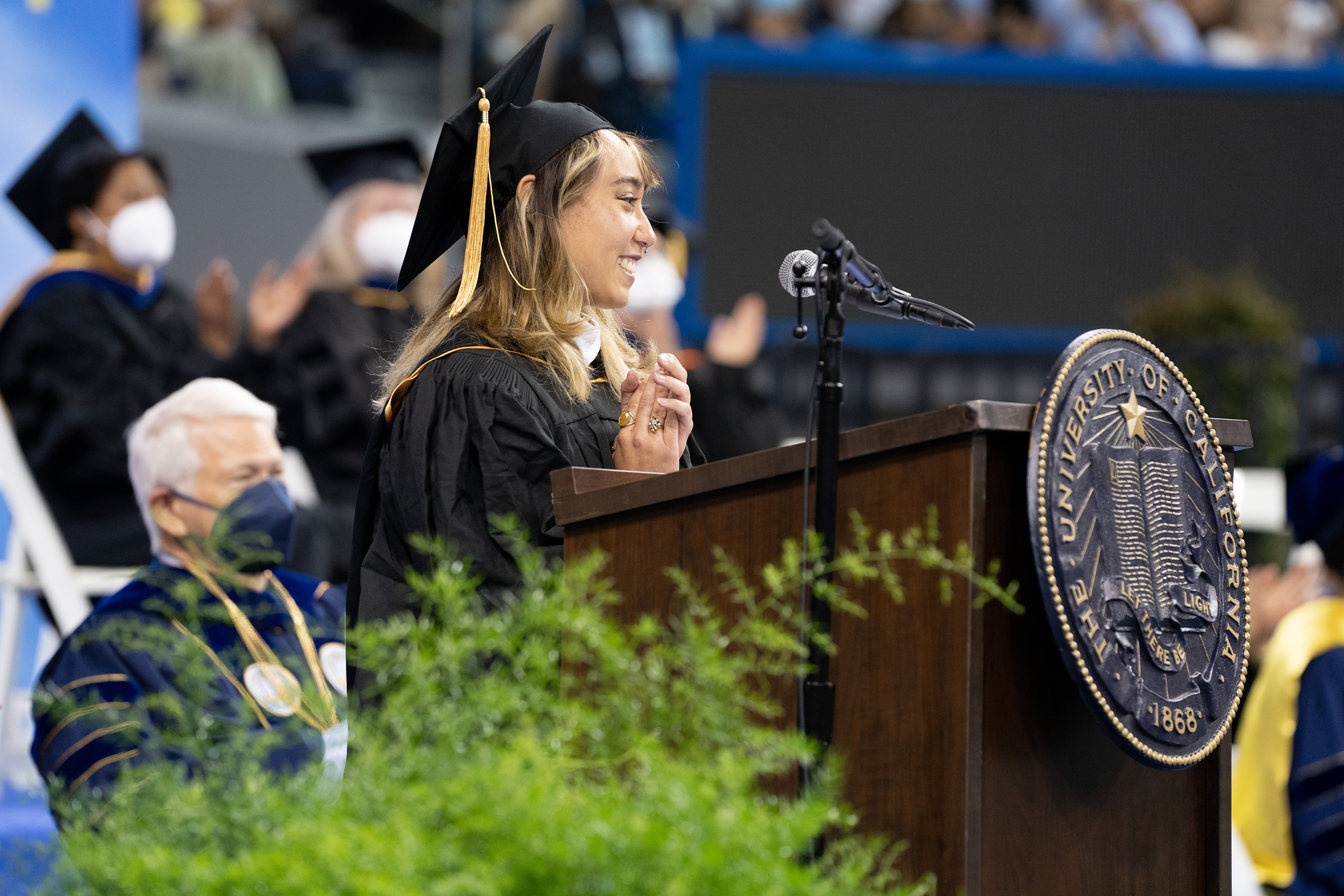 Psychology major William Molina’s family described their son’s elation at graduating in person, after the pandemic turned the transfer student’s first year at UCLA into a remote experience.

“I’m so proud and excited to see him graduate,” said his father Nelson Molina, an immigrant from El Salvador who said he spent his life working hard so his kids could succeed.

Over the course of the week, about 1,300 graduates from the classes of 2020 and 2021 will also attend in-person celebrations to make up for the remote graduations during the pandemic. Other ceremonies across campus featured keynotes addresses by presenters including U.S. House Speaker Nancy Pelosi, actor, activist and alumnus George Takei, Academy-Award winning actor Troy Kotsur, Indigenous artist and alumna Mercedes Dorame and U.S. Rep. Ted Lieu. Award-winning gymnast, activist and UCLA alumna Katelyn Ohashi spoke at all three of the UCLA College ceremonies in Pauley Pavilion. 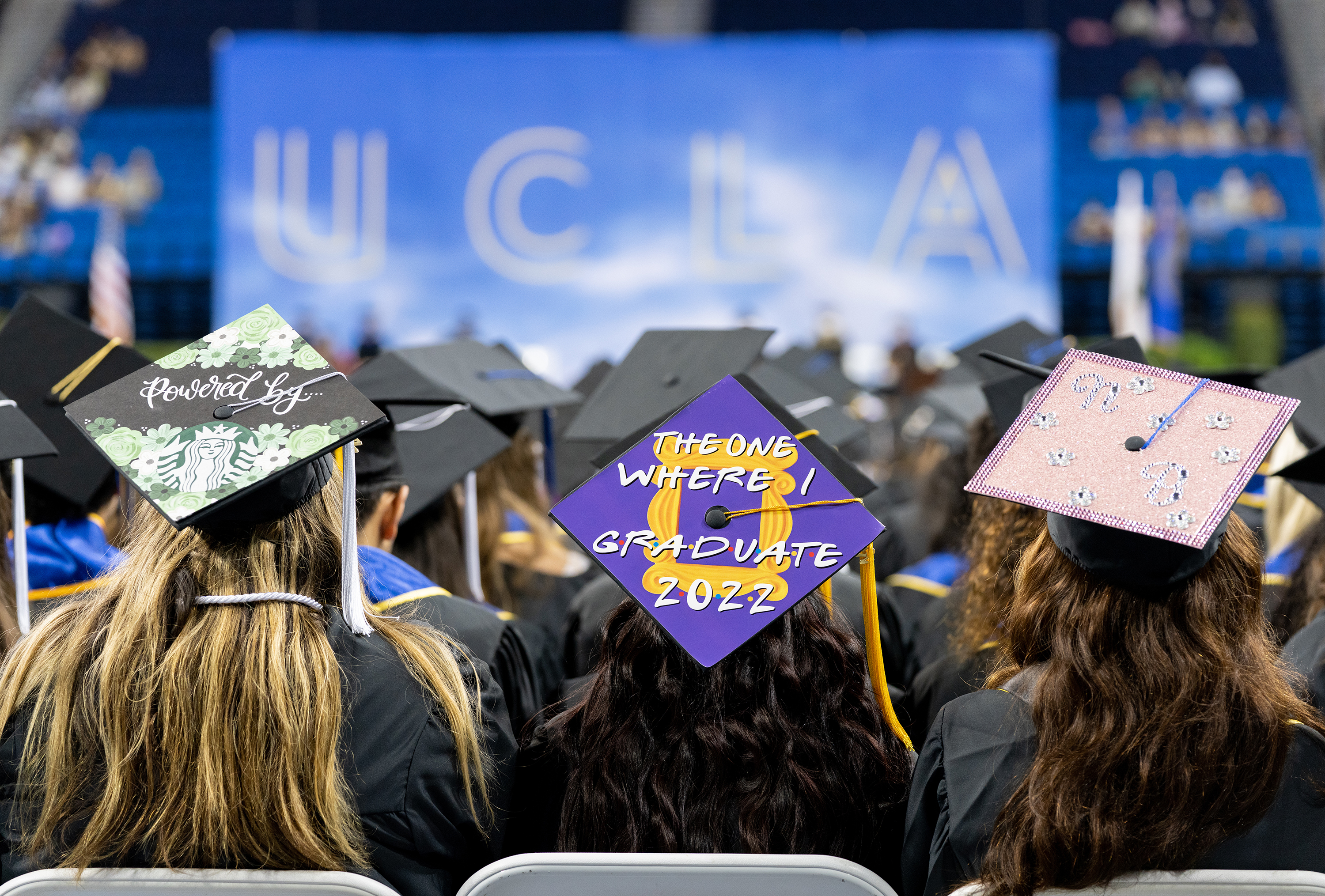 Inside Pauley, the required face masks concealed smiles but nothing could hide the crowd’s enthusiasm.

“After two years, amazingly, of virtual and hybrid commencement events, it’s a joy to be back in Pauley Pavilion for today’s ceremony,” said UCLA Chancellor Gene Block. “A tradition like this one bonds you to generations of UCLA students who have come before.”

He acknowledged the trials of recent years — not just the pandemic, but racial injustice, climate change, a polarizing presidential election, horrific mass shootings and the Russian invasion of Ukraine.

“These experiences have challenged you, but they’ve shaped you,” Block said. “They gave you greater respect for science and truth, and a stronger recognition of the dangers of misinformation.”

Block had to pause as students cheered their acknowledgement of the threat of disinformation.

“Even as they stirred up anguish, all these events etched on you a compassion and empathy,” he continued, “as well as a commitment to seeking justice and contributing to the greater good.” 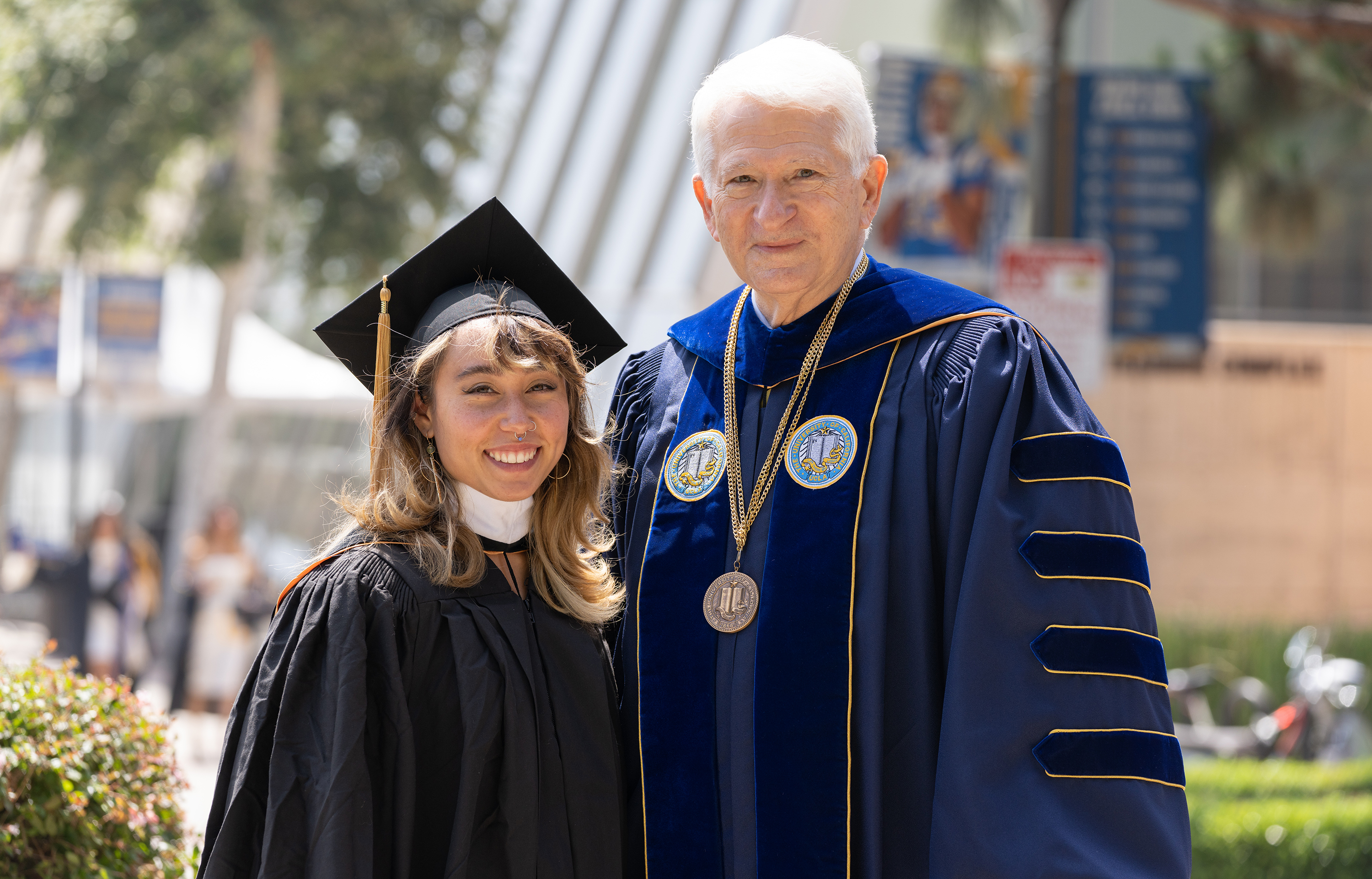 Ohashi, an elite gymnast who went viral while at UCLA with her perfect-10 routine, has used her platform to speak out on topics like mental health, body-shaming, sexual assault and cyberbullying. One of the UCLA College’s youngest alumni speakers ever, Ohashi graduated in 2019, at the last in-person commencement before the pandemic. She encouraged the class of 2022 to overcome fear and hesitation and embrace opportunity, and recounted her days at UCLA working with the student-run Bruin Shelter to support housing-insecure students.

“When [Bruin Shelter] first started and began looking for housing, they knocked on 100 church doors, where they heard 100 ‘no’s.’ It wasn’t until their 101st door they knocked on that they finally received their ‘yes,’” Ohashi said. “Most missed opportunities don’t come from not taking them, but from not seeking them… Most of the time, life doesn’t come knocking on your door. Instead, don’t hesitate to knock on doors and if you don’t hear a ‘yes’ your first time, it doesn’t mean there won’t be one. Now is the time to live life fully and try all the things you want.” 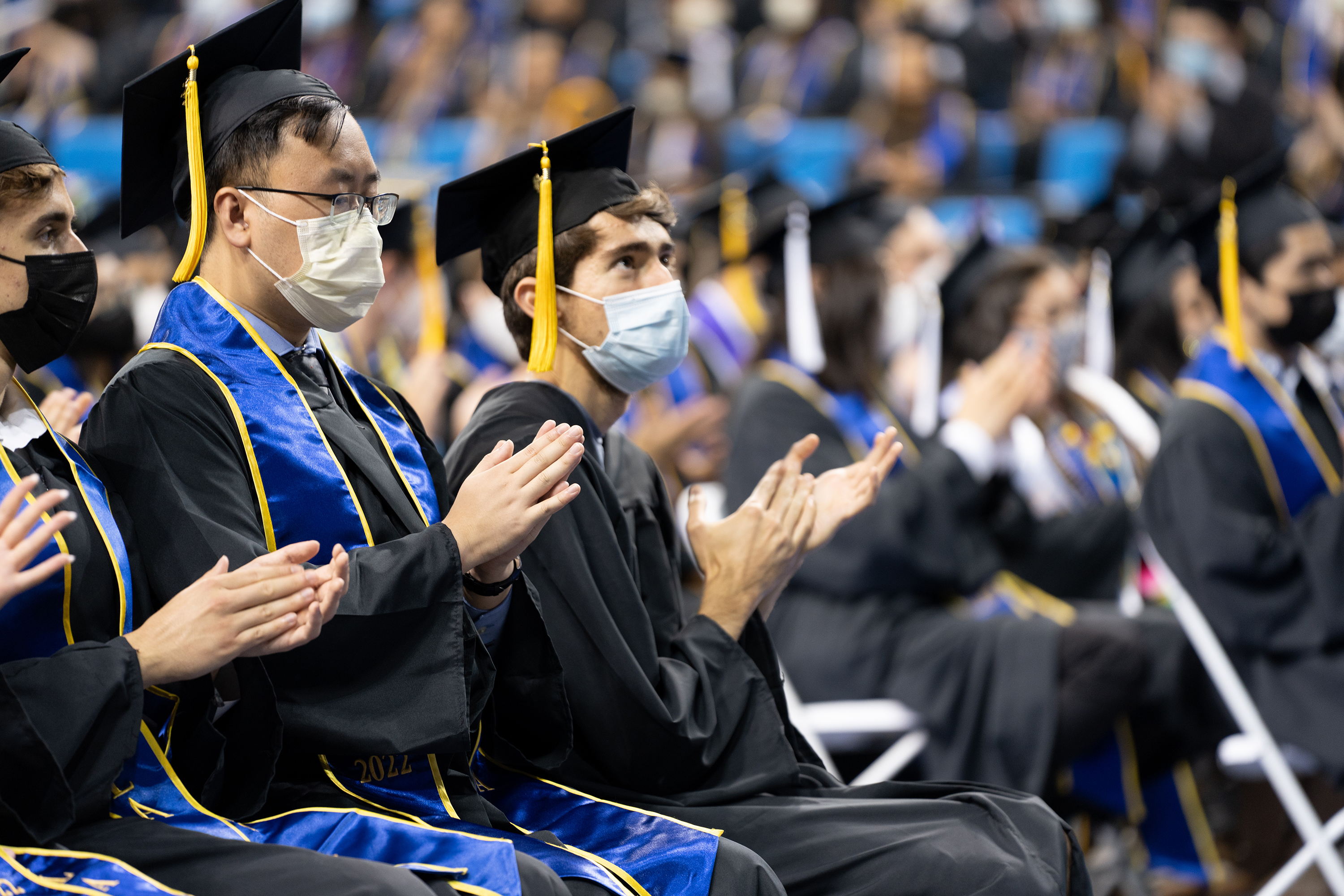 Twenty-year-old graduating senior Stephanie Widjaja, who left high school for community college two years early to get closer to her dream of transferring to UCLA and becoming a pediatrician, reminded her classmates that their path to success doesn’t have to look like anyone else’s.

“I stumbled my way through community college, thinking that UCLA was an unobtainable destination. I was expected to achieve greater things by others, but I could not fully believe in it myself. It was not until I opened up my UCLA acceptance letter and sat in my chair dumbstruck for a good five minutes that I realized dreams do come true, even if the path is non-linear and full of tears,” Widjaja said. “Congratulations Class of 2022! You have finally made it! Being a Bruin and making it out of these unprecedented times shows that you have a resilience like no other.” 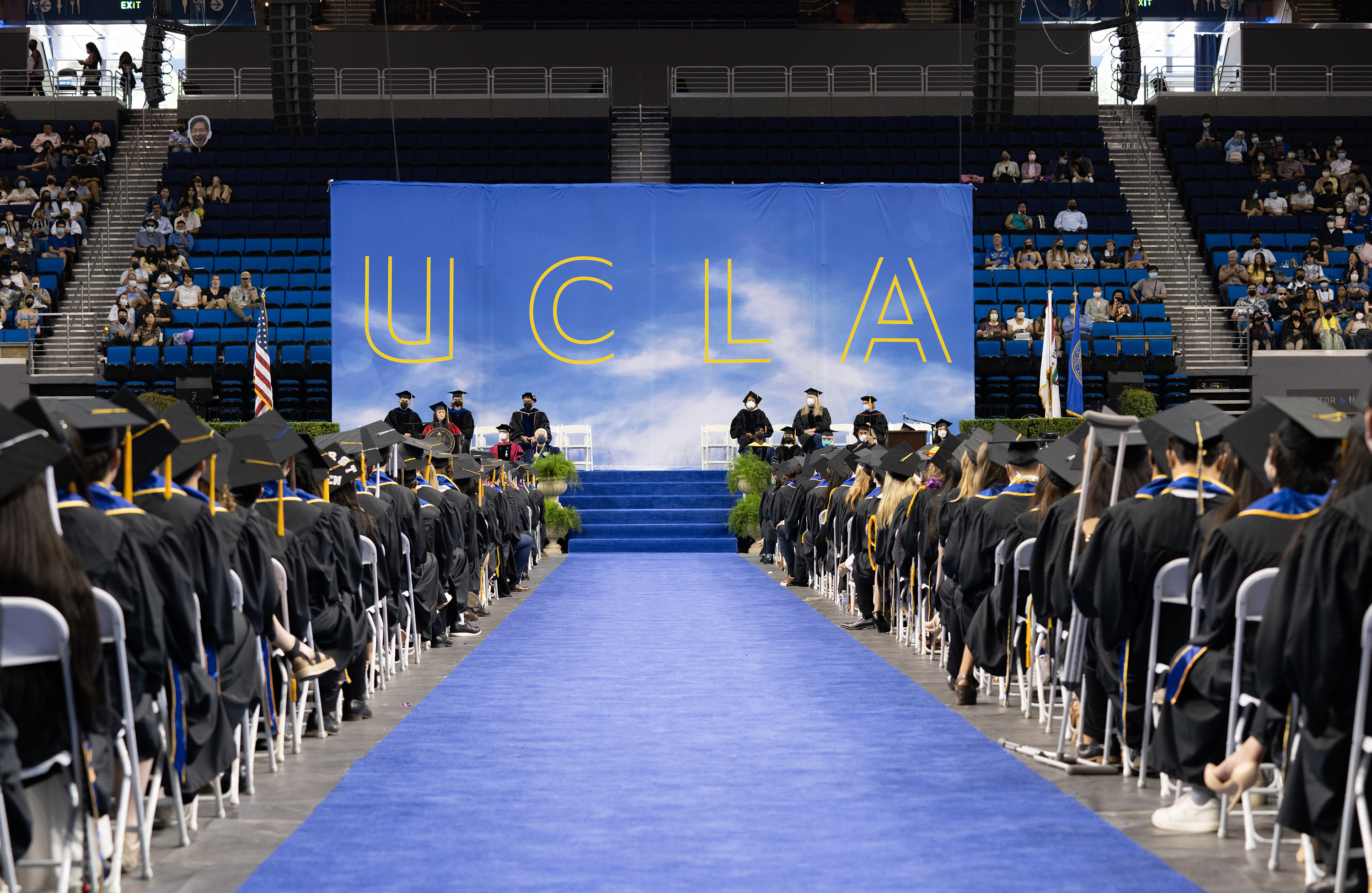 Widjaja led her classmates as they all shifted their tassels from right to left after Block formally conferred their degrees. As some students captured the tassel-turn with selfie videos, the room roared with cheers and applause from the thousands of parents, family and friends attending in person.

As the ceremony drew to a close, a few dozen mortarboards sailed festively into the air and the alma mater boomed over the sound system. The thunderous applause, group selfies, hugs with fellow graduates and all the other little things missing from remote celebrations came roaring back.