Leading scholars, clergy and activists will convene at UCLA on May 3 and 4 to examine the ongoing influence of the late Rabbi Abraham Joshua Heschel, a civil rights leader, anti-war activist and scholar who was a friend and ally of the Rev. Martin Luther King Jr.

“Rabbi Heschel is one of the persons who is relevant at all times, always standing with prophetic insights,” King once said.

“Moral Grandeur and Spiritual Audacity: A Conference in Honor of Abraham Joshua Heschel” will bring together 24 Jewish, Christian and Muslim thinkers from around the nation for discussions of Heschel’s work.

“UCLA is convening some of the most respected thinkers and leaders of the 21st century to consider the legacy of one of the most influential thinkers and leaders of the 20th century,” said Todd Presner, professor of Germanic languages and director of the Alan D. Leve Center for Jewish Studies, which is sponsoring the conference. “We are proud to bring together leaders from academia and the broader community to engage with and learn from each other.” 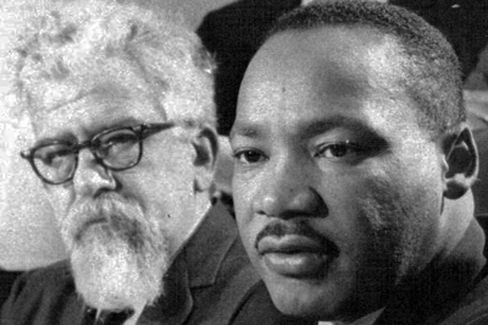 Born in Poland in 1907, Heschel became a leader in the German Jewish community before being deported by the Nazis. Although his mother and three of his sisters died in the Holocaust, Heschel escaped to America and became a professor of Jewish mysticism and ethics at the Jewish Theological Seminary in New York. He developed an activist vision of theology, fueling his support of civil rights and opposition to the Vietnam War.

After walking with King and others in the 1965 voting rights march in Alabama, Heschel famously remarked that “even without words, our march was worship. I felt my legs were praying.” He died in 1972, but Heschel remains an icon among progressive religious activists.

“Though not everyone in the civil rights movement was religious, spiritual leaders like King and Heschel were critical to mobilizing the conscience of the nation. It is vital that we fully understand that contribution,” said Darnell Hunt, a professor of sociology and director of the Ralph J. Bunche Center for African American Studies at UCLA, which is also sponsoring the event.

Among those scheduled to speak at the event are Heschel’s daughter, Susannah Heschel, a Jewish studies professor at Dartmouth College, and Cornel West, who has written extensively about religion, race and philosophy as a professor at Harvard University, Princeton University and Union Theological Seminary. West also is working on a book about Heschel.

West has praised Heschel as “the towering prophetic figure of the 20th century” who “has a lot to say not just to Jews but to everyone — Christians, agnostics, pagans, atheists,” but some have expressed concern about West’s scheduled appearance because of his criticism of Israel and his recent support of the divestment movement.

“Based on his 25 years of scholarly engagement with Heschel, we asked West to speak about the impact of Heschel’s ideas and activism, especially in the civil rights movement,” Presner said, noting that West was not invited to speak about the boycott, divestment and sanctions movement.

Presner said he and the center disagree with West on the cultural and academic boycott of Israel, but that it is important for a university not to censor speakers. Presner also noted that West has been adamant that opposition to West Bank occupation should not devolve into anti-Semitism.

The conference is free and open to the public, but reservations through the event website are required.

The event is also sponsored by UCLA’s departments of English and history, the Center for the Study of Religion and Hillel at UCLA.