“Wonder Woman” took moviegoers by storm in 2017, taking in more than $820 million in ticket sales worldwide. And Patty Jenkins’ role as director of the blockbuster was part of a positive — if possibly short-lived — trend for women directors that year.

Counting each year’s 200 top-grossing films, the number of women directors nearly doubled from 2016 to 2017, according to the newest UCLA Hollywood Diversity Report, published today by the UCLA College Division of Social Science. But women’s representation was still poor: Even with that increase, there were just 21 women directors among the 167 English-language films from 2017’s top 200, or just 12.6 percent of the total. And an early analysis of 2018’s top movies indicates the increase was just a one-year blip.

The report examined 12 different job titles among the creators, directors and top-billed cast of the top movies for 2017 as well as 1,316 broadcast television, cable and digital shows from the 2016–17 programming season. It found that behind the scenes and in front of the camera, advances for people of color and women remain fairly incremental, if not stubbornly static — and found that minorities and women remain mostly underrepresented compared with their share of the population overall.

“For six years the Hollywood Diversity Report has objectively taken stock of where the entertainment industry stands on racial and gender diversity, knowing that there can be no reform without a reckoning,” said Darnell Hunt, the report’s co-lead author and dean of the UCLA College Division of Social Sciences.

“Every year the data have shown that film and television content that feature diverse casts typically make more money and enjoy higher ratings and audience engagement,” Hunt said. “We feel confident our partners in Hollywood today see the value of diversity in ways that they did not before we began sharing our report.”

According to the report, women’s representation among actors in three types of TV content — scripted broadcast, cable and digital programming — is inching closer to women’s 50 percent share of the population overall.

“We’ve seen modest advances when it comes to movies and films,” said Ana-Christina Ramon, director of research and civic engagement for the Division of Social Sciences, and the report’s other lead author. “But deep-seated power systems — dominated by white male decision-makers at the highest levels — are hard to break. The kind of structural change necessary for a new order of business in the film industry has yet to happen, and pushing for it will require sustained vigilance and awareness.” 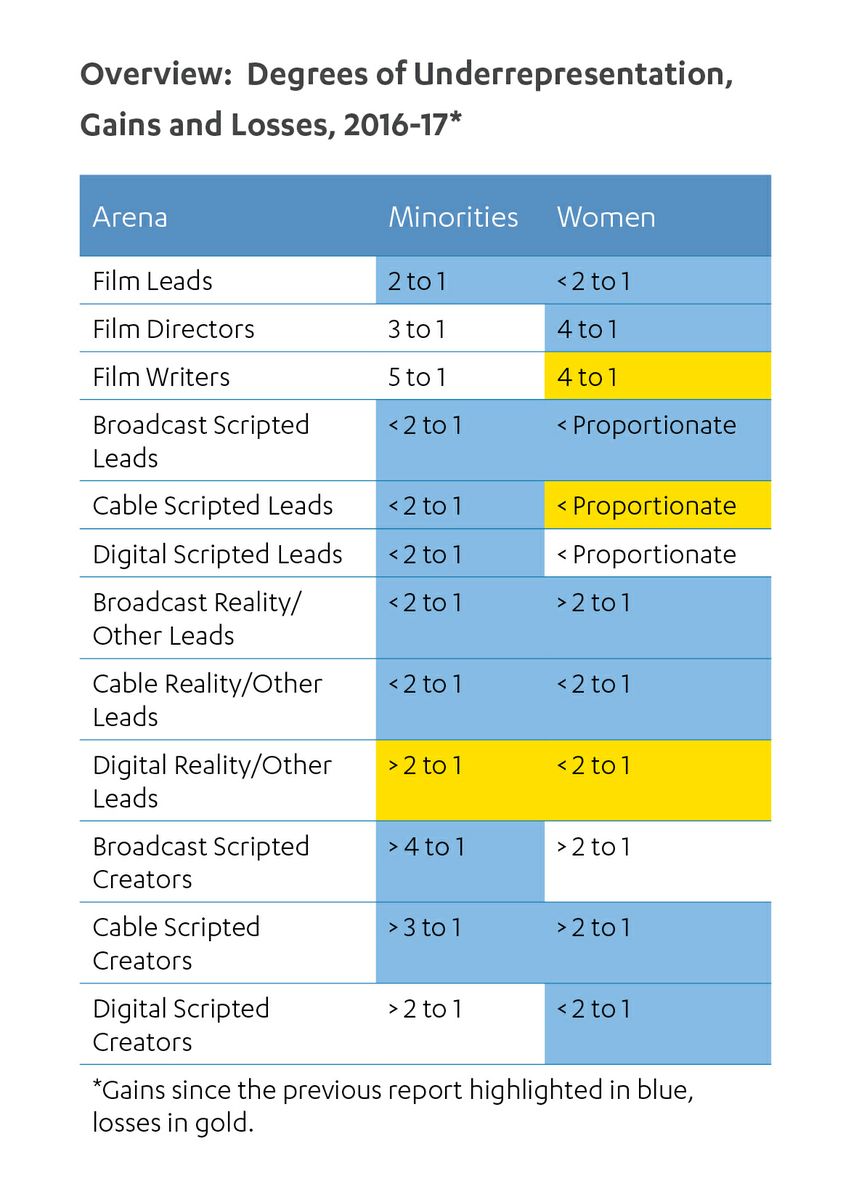 The report also found that minority ticket buyers accounted for the majority of ticket sales for five of the top 10 grossing films.

The report noted that the ever-broadening landscape for TV-related programming created by Netflix, Hulu, Amazon Prime and other streaming services has created a tailwind for gender and racial diversity.

“It’s clear the increased number of original programs alone has helped grow the share of the pie for minorities and women,” Hunt said.

Among the report’s other findings:

Gains for women and minorities

Where women and minorities lost ground

Future reports from the Hollywood Diversity team at UCLA will focus on how the entertainment industry can adopt practices that are proven to increase inclusion of diverse talent, understand where such practices have been deployed and how they have factored into the creation of diverse content that diverse audiences demand.