The UCLA Samueli School of Engineering has received a gift of $5 million from alumna Stacey Nicholas to create a permanent funding source for a program to support women in engineering.

Launched in 2017, Women in Engineering at UCLA provides mentorship, leadership training, research opportunities and industry outreach programs to help students who plan to pursue careers in engineering. WE@UCLA is open to all students.

“I was so inspired by the Samueli School and their commitment to take a leadership role with Women in Engineering at UCLA,” Nicholas said. “It has never been more important to encourage women to become engineers and to empower them to succeed. It is truly an honor to support the program, and I look forward to seeing how these students will change the world for the better.” 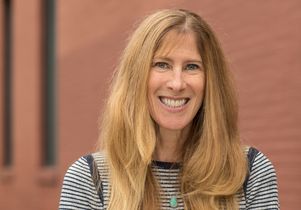 In fall 2018, women made up 27 percent of the school’s undergraduate enrollment — the highest proportion in the school’s history and an increase of seven percentage points from a decade ago — and 33 percent of the first-year students entering the school in 2018 were women. Nationally, women earned 21.3 percent of bachelor’s degrees in engineering in 2017, according to the American Society for Engineering Education.

“Our larger goal is to see women fully participate and succeed in our student body, and at all levels in industry,” said Jayathi Murthy, the Ronald and Valerie Sugar Dean of Engineering at UCLA Samueli. “Our Women in Engineering program will play a central role in those efforts, and I want to thank Stacey for her generosity and shared vision in supporting it.”

Nicholas received her bachelor’s and master’s degrees from UCLA, both in electrical engineering, in 1985 and 1987, respectively. She is the founder of the Irvine-based Opus Foundation, which supports STEM education outreach and the arts. This is her second major gift to a University of California campus, following a 2014 gift to UC Irvine’s Henry Samueli School of Engineering to fund scholarships and graduate fellowships, support outreach programs and endow its deanship.

Her latest gift is part of the Centennial Campaign for UCLA, which is scheduled to conclude in December 2019 during UCLA’s 100th anniversary year.