UCLA researchers have made new inroads into understanding germ cell tumors, a diverse and rare group of cancers that begin in germ cells — the cells that develop into sperm and eggs. The researchers developed a protocol to recreate germ cell tumor cells from stem cells and used the new model to study the genetics of the cancer.

Their findings could point the way toward new drugs to treat germ cell tumors, which account for around 3 percent of all cases of childhood and adolescent cancer.

The study, published in Stem Cell Research, was led by Amander Clark, a UCLA professor of molecular cell and developmental biology and a member of the Eli and Edythe Broad Center of Regenerative Medicine and Stem Cell Research at UCLA.

Germ cell tumors most often develop during embryonic development, in the testes and ovaries, but they can also occur in the spine, chest and brain when germ cells mistakenly migrate there. 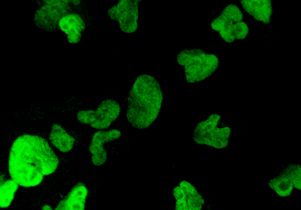 There are five subtypes of germ cell tumors: germinomas, embryonal carcinomas, yolk sac tumors, choriocarcinomas and teratomas. Each has its own unique properties, but most of them affect young children, adolescents and young adults.

“What makes this cancer really hard to study is that we think the disease begins in the womb and then remains latent until after birth or during young adulthood,” Clark said. “That means we can’t easily isolate or study the very earliest stages of the disease in patients.”

For the new work, Clark teamed up with Dr. Joanna Gell, a UCLA pediatric cancer specialist who had become interested in germ cell tumors a few years ago, when she was a clinical fellow helping to care for a teenage girl with a hard-to-treat case.

“The treatments we have are relatively effective in curing germ cell tumors, but they come with a whole host of serious side effects,” Gell said. “When you’re talking about treating a 15-year-old who wants to live for 70 more years, those side effects can have major impacts on the lives of these patients.”

For example, she said, young adults treated with chemotherapy drugs could experience side effects such as heart disease, infertility or a higher risk for developing other cancers.

Previous research suggested that a gene called PRDM14 may be involved in germ cell tumors; studies have identified mutations in PRDM14 make men more susceptible to testicular cancer. Scientists know that the gene plays important roles in embryonic development but because it is generally turned off in adult tissues, no PRDM14 protein is produced by healthy adult cells.

Clark and Gell coaxed human pluripotent stem cells, which can create any cell type in the body, to differentiate into germ cells, at the embryonic stage of germ cell formation, when they are known as primordial germ cells. Then, they engineered the primordial germ cell–like cells to produce more PRDM14.

The researchers also analyzed samples of germ cell tumors from patients and found evidence of PRDM14 protein in embryonal carcinomas, seminomas, intracranial germinomas and yolk sac tumors — but not in teratomas, which suggests that the protein could be a marker  pathologists could use to better characterize the type of  tumor.

“There had been evidence that PRDM14 may play a role in germ cell tumor development but no one had actually looked in tumor samples to find if the protein is actually there,” Clark said. “This proves that the PRDM14 protein is abnormally expressed in germ cell tumors, and therefore a possible therapeutic target.”

The research won’t lead immediately to a new treatment for germ cells tumors, because no drugs currently exist that can shut off PRDM14. But the techniques the scientists used should pave the way toward additional studies on the molecular details of germ cell tumors. Clark and Gell are planning to take skin cells from people with germ cell tumors, reprogram those cells into induced pluripotent stem cells and then generate PGCs, which would recreate each patient’s tumor cells in the lab for further testing.

“By using induced pluripotent stem cells, we’ll now be able to understand the events that occur in specific patients’ early germ cells that could ultimately contribute to the formation of germ cell tumors,” Clark said. “If we know how the disease starts, we can develop treatments that force it to stop.”

The research was supported by grants from the National Institute of Child Health and Human Development, the Concern Foundation, and the UCLA Broad Stem Cell Research Center Training Program, as well as a UCLA Child Health Research Career Development Award and a UCLA Tumor Cell Biology Training Grant.