During the height of the California drought that began in late 2011, Los Angeles imported 89 percent of its water from more than 200 miles away — an energy-intensive process. After a yearlong reprieve, Southern California is again under severe water scarcity conditions: Only 2 1/2 inches of rain have fallen in Los Angeles during the past 12 months.

This time around, could Los Angeles shift its dependence from imported water to local water? A new report by UCLA researchers says the city could, eventually — if it does a better job of capturing local stormwater, increases the use of recycled water, cleans up groundwater and steps up conservation measures.

“It will take a lot of work, but 100 percent local water is possible by 2050,” said Mark Gold, UCLA’s associate vice chancellor of environment and sustainability and one of the study’s authors. “Los Angeles needs to reduce local water demand while also transforming its water supply infrastructure to maximize recycled water, groundwater supply and stormwater capture.”

The report also suggests that the city could increase the supply of local water in groundwater basins, which the city uses as water storage reservoirs, by undertaking projects to improve the management of stormwater. Los Angeles also could bank recycled water or water imported from northern California or the Colorado River during times of plenty by letting it seep into groundwater basins.

The study, co-authored with researchers from the Colorado School of Mines, is the last in a four-part series on sustainable water management in the city of Los Angeles.  This study assesses the water landscape of the entire city, taking into account greenhouse gas emissions, stormwater pollution, groundwater management, conservation and the costs and benefits of various city water supplies. The authors also offer several policy recommendations for the city.

“The key for Los Angeles to potentially reach water independence would be to simultaneously increase local water supply while bringing down local demand for water,” said Katie Mika, a postdoctoral scholar at the UCLA Institute of the Environment and Sustainability and one of the study’s lead researchers. 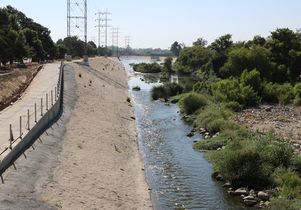 Katie Mika
The Los Angeles River at the Glendale Narrows.

“We learned through extensive modeling that every watershed is different, and as a result, different stormwater structural best management practice approaches are needed to achieve clean water and maximize groundwater recharge for each watershed,” said Terri Hogue, a professor at the Colorado School of Mines and co-lead author of the report.

According to the report, tens of thousands to hundreds of thousands of treatment and infiltration devices are needed throughout the watersheds to come close to meeting California water quality standards.

For example, the study found that in order to maximize water quality in the Dominguez Channel watershed, which spans 133 square miles in southern Los Angeles County, the city would need to install 65,000 bioretention basins — landscaped depressions or shallow basins used to slow and treat on-site stormwater runoff through physical, chemical and biological processes.

The researchers also determined that to achieve the best water quality in the Los Angeles River watershed, which covers 824 square miles and is the largest watershed in Los Angeles County, it could take 138,000 vegetated swales (shallow, sloped channels of vegetation) and 83,000 dry ponds (low-lying, depressed areas near rivers and lakes that typically are used to help clean stormwater).

But large-scale implementation of small, structural runoff infiltration and treatment devices would be extremely difficult to complete over the next decade, the approximate time period for compliance with California water quality standards. Regional runoff infiltration and treatment solutions — like those in place in the city’s Echo Park and Machado Lake watersheds and at the Tujunga Spreading Grounds — would need to accompany the smaller measures, like distributed runoff treatment and infiltration devices.

Researchers found that toxic concentrations of zinc and copper in water runoff could be reduced by 10 percent to 20 percent by 2035 if all cities in the studied watersheds implemented a law similar to the Los Angeles City law that requires new and redevelopment to infiltrate rainwater from a 3/4-inch storm. More permeable land area in the watershed would dramatically reduce the cost to remove these toxic metals from local bodies of water, which the study estimates would be $6 billion to $7 billion.

“We’re already seeing Los Angeles take incremental steps toward local water, but more needs to be done, as we’ve seen from the backsliding on consumer water conservation rates once the state prematurely declared the drought was over,” Gold said. He added that climate change is already reducing water supplies from the Sierra Nevada snowpack and the Colorado River watershed.

Another important advantage of using more local water is that it would reduce the region’s demand for energy. Angelenos could lower the city’s greenhouse gas emissions from water supplies by up to 70 percent by reducing the use of imported water and increasing conservation rates, the study found.

The city has already taken some steps in that direction: In 2014, Los Angeles Mayor Eric Garcetti issued an executive directive to purchase half as much imported water by 2025, obtain half the city’s water from local sources and have the city use local water by 2035 and reduce water consumption by 25 percent by 2035.

Among the report’s policy and research recommendations for Los Angeles:

“We need more data to understand and more accurately model potential outcomes,” Mika said. “That also needs to be coupled with increased funding, which would be critical for making these projects happen.”

The research team also included professor Stephanie Pincetl and associate research director Erik Porse, both of UCLA, and researcher Elizabeth Gallo of Colorado School of Mines. The Los Angeles Bureau of Sanitation and Department of Water and Power provided data and reviewed the report before the findings were final, and the research was funded by the sanitation bureau.

The study is part of the Sustainable LA Grand Challenge, a UCLA research initiative that aims to transition Los Angeles County through cutting-edge research, technologies, policies, and strategies to 100 percent renewable energy and 100 percent locally sourced water, while enhancing ecosystem and human health, by 2050.