For the first time in Special Olympics World Games history, cheers are ringing out from the sidelines as 225 cheerleaders from around the country converge to be part of Cheer for LA2015.

For months, the 17 cheer groups, who came to Los Angeles from eight states and represent a mix of children and adults of different abilities, have been practicing three routines and sideline cheers from YouTube videos, including some prepared for them by the UCLA Spirit Squad.

Now that it’s show time, the squads are splitting a very full schedule that involves cheering for 10 sports at four different locations. The cheerleaders are performing at competitions, award ceremonies and festival performances. 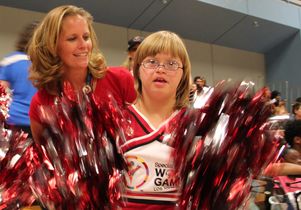 And while it’s been quite an endeavor for the families to fund-raise to pay for the trip, there’s no question about the significance of this opportunity. Not for Gena Mitchell and her 12-year-old daughter Devin, a member of SOMO JOY, short for Special Olympics Montgomery County Joy, a cheer squad from Maryland.

“The magnitude and opportunity to come see the largest stage in the world for individuals with special needs and be in the spotlight in such a positive way — celebrating what Devin brings to the table — gives me such a feeling of happiness,” Mitchell said. Holding back tears, she added, “I will probably be crying tears of joy for the entire nine days.”

On Tuesday, Devin, who has Down syndrome, and her fellow cheerleaders, all dressed in snappy red-and-white cheerleader outfits and waving red-and-white pom-poms, fired up a capacity crowd at Collins Court in the John Wooden Center at the kickoff of the rhythmic gymnastics competition. The enthusiastic crowd clapped with the squad and joined their “Here we go, world games” chant to open the event and welcome the athletes.

“Devin feels so welcomed in Special Olympics, and I think she really feels at home,” said Mitchell, who watched her daughter perform. “That makes her so emotive and outgoing.”

The idea of spreading the spirit of inclusion that’s the core of Special Olympics to cheerleading was the vision of one woman, Darian Packard, the volunteer cheer commissioner for the 2015 world games.

Packard, a Southern California native who now resides in Maryland, has been involved with the SOMO JOY cheer squad for four years, although her involvement with Special Olympics runs much deeper.

A mother of four, including a daughter with Williams Syndrome, Packard said, “Incorporating cheerleaders into the Special Olympics was very personal.” She got the idea while with her family at the 2011 Special Olympics in Athens, Greece.

“We went to Greece and had an amazing time,” Packard said. When she learned at the closing ceremonies that Special Olympics were going to be in L.A., “I thought ‘Wow! It would be so cool to have cheerleaders there.’ Cheerleading is recognized by Special Olympics, so I proposed the idea to have it at the world games.”

It took a yearlong effort and plenty of hard work to bring participants, who range in age from 6 to 42, to Los Angeles. The unified squad from Mercer Island High School in the state of Washington, for example, raised almost $10,000 through an online campaign, a yard sale and a donut sale. They solicited donations outside grocery stores and put flags on veterans’ graves on Memorial Day to help defer trip expenses.

To coordinate all the cheerleading activities and participate in rehearsals and walkthroughs, Packard has been in Los Angeles since June 20.

“It’s been challenging along the way to figure out every facet of this,” she said. “We don’t have a roadmap, so we are creating things as we go along because it hasn’t been done before.”

Packard’s efforts have provided the opportunity of a lifetime for all the cheer participants, who wear the same outfits and do the same cheers, no matter which organization they represent or whether they have a disability.

“Our squad has the same practices, same routines, so it’s very inclusive, and there is no differentiating between what you can and cannot do,” said Mercer coach Traci Brandon. “It’s really treating these kids as peers.”

“I like the cheers and the athletes,” said SOMO JOY cheerleader Leah Sachs. “I like cheerleading so much.”

For Mitchell, the world games have given her and her daughter the chance to showcase the entire experience through social media.

“Devin wants to tell everyone she is here for the world games,” Mitchell said. “She’s overwhelmed with the reality of being here, and she’s so excited.”