A military veteran and former foster youth, Mike Stajura is a doctoral student studying community-based disaster relief efforts in the UCLA Fielding School of Public Health. He served at Fort Hood and other U.S. Army posts from 1995 to 2002. This op-ed was posted April 17, 2014, on Zócalo Public Square. Thinking L.A. is a partnership between UCLA and Zócalo Public Square.

How could this have happened at Fort Hood again? That’s the lingering question after the shooting that took place two weeks ago in which three people were killed and 16 injured. Talking heads emphasize that last word to remind us of the mass shooting at the base in 2009, when 13 were killed and 30 injured. There's no wasy answer to why it happened again, but it's worthwhile for us to consider what life on a large Army post is like — and how the Army handles soldiers with mental health issues. 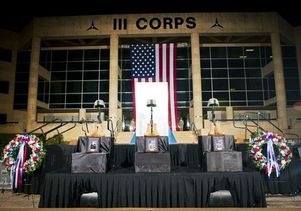 Photo courtesy of The U.S. Army
Memorial to shooting victims at Fort Hood

Mass shootings are an American problem, so it should surprise few that they also affect America’s Army. An FBI study found an increased frequency of mass shootings in the U.S.— jumping from an average of five per year from 2000 to 2008 to about 15 per year from 2009 to 2013. Given this national trend, it’s logical that the number of shootings on military installations would rise, too. Except for the belief that things like this aren’t supposed to happen on limited-access, "safe" military bases.

I was stationed at Fort Hood as a young officer in the 1990s, and many people do not fully appreciate that it really is more like a small city than they might think. Including the training grounds, Fort Hood covers an area the size of San Diego. About 45,000 soldiers are stationed there, along with more than 9,000 civilian employees. The post also serves thousands of military families that live on Fort Hood or in the neighboring communities. Fort Hood has a hospital, nine schools, two grocery stores, big-box retail stores, gas stations, four post offices, a fire department with five stations, and a dedicated police force.

Of course, the population of an Army post is generally younger and disproportionately male as compared to that of an average American city. The median household income is also lower. And, unlike other cities, reveille blasts from loudspeakers every morning on Fort Hood, and there are gates with armed guards who provide limited access.

But an army post isn’t as safe as we’d hope; unfortunately, it has many of the same problems we see in typical cities. The blogger ArmyWife101 has noted the widely held perception that there were just as many break-ins, physical attacks, and other crimes on-post as off-post at Fort Bragg, another large Army post in North Carolina. And while reliable crime statistics for Fort Hood are scarce, one online source estimates that violent and property crime rates on Fort Hood exceed those of Texas by 10 percent. I can also personally attest to dealing with a rape and molestation case involving the wife and daughter of a soldier in my unit who was deployed to Bosnia. This was one of several crimes that touched soldiers I served with.

Fort Hood is a place where people live, but it’s also a massive workplace. I think that the risk of a mass shooting at Fort Hood is basically the same as any workplace—but that’s actually higher than any other kind of venue. Forty percent of mass shootings that occurred from 2000 to 2012 occurred in the workplace, according to that FBI study. That FBI report classified military bases in an "other" category with churches, but thinking of military bases as workplaces may help illuminate a less well-known shooting at Fort Bragg in 2012 (when a soldier facing a court martial shot and killed his commanding officer and wounded another officer before turning the gun on himself), and another case there in 1995 (when a soldier with a personality disorder shot and killed an officer and wounded 18 others).

Mental health issues have clearly been at play in several of these shootings, and the Army has been trying to improve its services since there are obviously issues brought up by the recent wars. A 2013 report from the Army Task Force on Behavioral Health Corrective Action Plan 5 March 13.pdf noted a doubling of the behavioral health workforce in the previous five years, but it also noted that some facilities still cannot meet the demand. Unfortunately, I think they’re focusing more on the second- and third-order consequences of a larger problem that remains unmitigated.

Let’s take the case of the 2009 Fort Hood shooting by an Army psychiatrist, which, in a tragic irony, may have been shaped in part by the rapid push for more psychiatrists. That psychiatrist had been held back and "recycled" twice in his medical training, a classmate at the Uniformed Services University of Health Sciences told me. That same classmate told me the shooter was regularly placed in "low-impact" roles that kept him on the sidelines, a story also shared by another military psychiatrist in a news interview. The 2009 shooter grew increasingly isolated from his peers and patients, and he was barely qualified to do his job. In spite of these issues and even after drawing the FBI’s attention for expressing increasingly radicalized sentiments, the Army proceeded with plans to send him to Afghanistan. Was he kept on duty just because he satisfied some bean counter’s goal on a manpower spreadsheet?

This leads to the issue of how effective the care for soldiers with mental health problems is. The Army specialist who committed the most recent shooting at Fort Hood was undergoing psychiatric evaluation and on medication, according to news reports. However, those news reports say he had not set off any behavioral red flags or indicated a risk of violence. Were important cues missed because his mental healthcare providers were overburdened by a heavy caseload?

If soldiers are flagged for behavioral issues, there are also barriers to dealing with them in the most constructive way. This is a problem for commanders. In many units, soldiers who are unable to perform their duties are kept on the roster for extended periods of time, inflating the unit’s numbers. The Army won’t send replacements until they’re discharged or reassigned. An infantry officer I know who commanded a battalion in Afghanistan only received a list of non-deployable soldiers with mental health issues after his unit got deployment orders. He had to go to war without those soldiers, meaning that the soldiers in his unit had to carry the workload of those who didn’t deploy. Health privacy rights were cited as an explanation for withholding this critical information, but a uniformed psychiatrist told me that there was no such prohibition if it affected a soldier’s ability to function. Perhaps mental healthcare workers felt that withholding the information would avoid stigmatizing the soldiers, but it’s just as likely the strained mental healthcare organizations on post only raised the issue when it became an immediate priority. That’s how too many things in the Army work: There’s only time to focus on the "50-meter target," meaning the issue that is closest.

Some in the Army have told me they think mental health and behavioral problems have been exacerbated because recruiting standards were relaxed at the height of the Iraq War. Not enough eligible and qualified Americans volunteered to serve, and the Army granted more criminal record and "moral" waivers, as described by The New York Times. Worse, some recruiters reportedly coached applicants to leave key mental health information off their applications, according to Internet postings and news reports. The Army’s recent move to become more selective about recruits and to enforce stricter standards as the Army downsizes will address this problem, but the perception is that many current disciplinary and behavioral problems can be traced back to recruits who were only able to join due to relaxed standards.

Why did the most recent Fort Hood shooter "snap"? We still don’t know definitively, but it wasn’t because of combat experience—a study published last year in The Journal of the American Medical Association confirmed that a pre-existing mental health condition, not combat experience, was more closely associated with military suicide, which is what I think the shooter had in mind all along. And it wasn’t that he didn’t receive mental healthcare. He was undergoing psychiatric evaluation and on medication, but had not set off any red flags. According to the reports available so far, he was a good soldier with no disciplinary issues.

Even if we don’t yet know the exact cause in this case, the shooting provides an important opportunity to consider how a public health approach can be applied to mental health issues in the Army—spotting issues upstream before they create more problems downstream, and being mindful of unintended consequences rather than obsessing over numbers on staffing spreadsheets. Let’s try to identify and mitigate problems that affect the combat readiness, quality of life, and the safety of our soldiers and their families. They deserve better.