In the week since a burst water main inundated part of UCLA, repair crews have made progress returning affected areas of campus to normal. Parking structures have been drained and declared safe for repairs. The damaged floor of Pauley Pavilion has been removed. The Arthur Ashe Student Health and Wellness Center has largely reopened.

Campus crews and contractors have worked around the clock, removing saturated drywall, pulling up soaked carpets and repairing landscaping scoured by flood waters, among other tasks, said Kelly Schmader, assistant vice chancellor for facilities management. The five buildings, two parking structures and grounds damaged by the flood are being transformed, with some reopening while others will take more time to repair.

“We hired a few contract firms to speed the remediation effort, and we had our own men and women in blue-and-white shirts working shoulder to shoulder with those contractors remediating damaged areas,” Schmader said. “Now we’re getting back to normal and moving into the restoration phase.”

While crews have removed the damaged wood floor in Pauley Pavilion, other repairs to locker rooms and meeting rooms are ongoing. Last week, Athletics Director Dan Guerrero announced his commitment to have Pauley ready for the start of basketball season on Oct. 31.

Parking structures 4 and 7 have been fully drained and cleared of the nearly 1,000 vehicles once trapped inside. Most of the cars have been claimed by their owners – drivers continue to have their insurance companies tow away the 200 that remained in remote lots as of noon today.

A structural engineer has evaluated the parking structures and declared them safe, Schmader said, relieving concerns about the long-term loss of parking capacity. The structures remain closed, with access points fenced, as crews remove dirt and debris and ensure that lights, ventilation and fire-safety systems are working properly. Repairs are also needed where the water pressure blasted steel stairwell doors off their hinges and blew the doors off elevators.

In the lower level of Structure 4 beneath the John Wooden Recreation Center, the vinyl coating peeled off the ceiling and exposed the drywall, which requires replacement.

While most of the Arthur Ashe Student Health and Wellness Center is back in use, repairs are planned for the basement, which was severely damaged, and for an elevator that suffered significant water damage.

Staff at the John Wooden Recreation Center recently reopened the cardio and weight rooms on the west side of the gym and hope to open most of the second floor next week. The locker rooms, rock wall and adjacent cardio equipment remain off-limits. Workers have already removed ruined drywall and carpet and are preparing to replace it. However, the first-floor courts throughout the gym were badly damaged, and replacing them is likely to take until mid-fall. 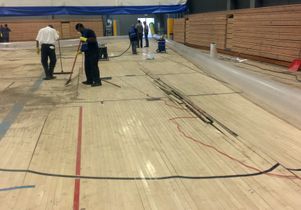 The J.D. Morgan Center and the Acosta Athletic Training Complex both took on several inches of water and remain closed, but it’s anticipated that they will open within one to two weeks. Crews have already installed fresh drywall, and new carpet is due in next week.

Drake Stadium’s recently installed blue running track appears to be undamaged, but Athletics and Recreation will keep an eye out for problems. Marshall Field, located in the middle of the track, will reopen after resodding. UCLA’s intramural field has already reopened.

Campus officials are keeping a tally of costs incurred in the flooding and its aftermath. Campus officials have said that the Los Angeles Department of Water and Power, which owns the 93-year-old water pipe that burst on July 29, bears financial responsibility for the damage.

About 300 facilities staffers worked side by side with contractors over the past week to move the campus toward normalcy, while 600 other facilities employees ensured that the rest of the campus will be ready for the beginning of the school year, Schmader said.

“It’s pretty inspiring to see how committed everyone is to our campus,” he said. “It’s great to be surrounded by this team. They really rise to the occasion, especially when there’s a crisis like this.”