We have all been flummoxed by some kind of math problem, staring blankly at the instructions, muttering “It’s all Greek to me.”

But what if the instructions really were in Greek, or some other language you didn’t know? That’s the situation faced by millions of immigrant students in the United States and Mexico, said Patricia Gándara, professor of education at UCLA’s Graduate School of Education and Information Studies and the chair of the UC-Mexico Initiative’s Education Working Group.

In California, where bilingual instruction is largely prohibited, secondary students who don’t speak English quickly fall behind, said Gándara. By high school, most new immigrants do not have time to acquire the language skills they need to succeed in advanced classes or even stay on track for graduation.

And the problem is not confined to the United States, Gándara said.

“The estimate is that 450,000 U.S.-born citizen kids are now living in Mexico, trying to go to school there. In this regard, Mexico is exactly like the United States, in that it is not clear how to address the educational needs of these students. So many either get pushed out, or become discouraged and drop out of school, which is a disaster for both countries,” she said. “This is one of the greatest challenges identified by the UC-Mexico Initiative’s Education Working Group, and the intent is to try to bring these education systems into alignment so that one benefit is for the kids to not have to suffer as a result of moving back and forth across these borders.” 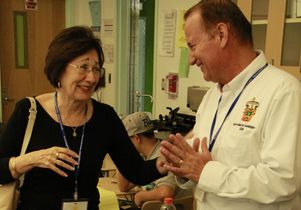 Jeanette Marantos
Patricia Gándara, who created Project SOL, speaks with math professor Manuel Rosas Verdin of the University of Guadalajara, a partner in the project.

Enter Project SOL, a bilingual, online curriculum designed to help students understand complex concepts in their own language, even as they are listening to a lesson in a different language. The name is a play on words, Gándara said, because “sol,” which means bright and sunny in Spanish, stands here for Secondary Online Learning.

Gándara is co-director of the Civil Rights Project/Proyectos Derechos Civiles at UCLA, which has created Project Sol. The program has been designed to align with Common Core standards in the United States as well as curriculum requirements in Mexico, Gándara said. The goal is to make the online curriculum available for free this fall and to expand the offerings to additional math courses and sciences.

The algebra course is being field-tested this summer at West Adams Preparatory High School in Los Angeles, where about 55 sophomores have enrolled in an intensive, five-week program, studying algebra five hours a day for five days a week. Gándara said the only requirement for the program was that students had to be beginning English learners.

The classes are taught in Spanish with an introduction to English terminology, Gándara said. The program is designed to be used in a classroom, she said, because students typically need support from teachers to effectively learn these concepts. The curriculum helps reinforce their English learning, she said, because the students hear the vocabulary in English and then can toggle on their computers, or look at their worksheets to see an explanation in Spanish.

The students have been divided into two classes, each taught by two instructors — Jazmin Rodriguez and Edith Issakhanian, seasoned math teachers from Los Angeles, who have teamed up with math professors Manuel Rosas Verdín and Eric Pulido from the University of Guadalajara, the largest public state university in Mexico.

Issakhanian said she fell in love with Project SOL last year when she used an earlier version. In that class, she said, she did not have access to computers, but she was able to print out the worksheets that corresponded to her lessons and give them to her Spanish-speaking students.

“I taught geometry and algebra, and, for students who barely spoke any English, the vocabulary was pretty intense,” she said. “I could see they were overwhelmed, but the minute I gave them a worksheet and the instructions were in Spanish, they lit up and were comfortable again.”

This summer, the two algebra classes have access to iPads, so the students can actually look up vocabulary words and instructions in real time while the teacher is giving a lesson. The online program also offers lots of activities to help students understand the concepts.

“The students love taking the quizzes; to them, it is like a game even though they are being tested on Common Core standards (in algebra) and getting prepared,” Issakhanian said. “Some of these students have never had an iPad or computer, and they are creating their first email account, so it is more than just learning math for them. They get a whole experience out of it.”

Gómez said the university “transformed itself” 20 years ago to better serve its secondary students in Mexico. Instead of serving just students concentrated in the metropolitan area of Guadalajara, the University of Guadalajara created a 15-campus network, making it easier for students around the state to enroll in secondary school or college. In the interim, though, many potential students gave up on a higher education, Gómez said, and opted to migrate to the United States, hoping for better opportunities. The university is trying to reach out to those students, and others who live between the two countries, he said, to help them accomplish their academic dreams.

These students live in a kind of twilight zone — not fluent in English or Spanish, and feeling like outsiders no matter where they live. “Even when they come back to Mexico, they are seen as the ones who left,” Gomez said. “They may have lived here once, but they are not one of us anymore. So we understand that. We have to design a program that takes into account the difficulties and problems this community has had to face for the last few decades.”

Collaborations with the UC-Mexico Initiative and affiliations with programs like Project SOL help bridge that gap, Gómez said, and Issakhanian agrees. When she and her fellow summer school teachers meet together, she said, “the consensus is that this is a great program. It is something I will definitely use for a long time. As a teacher, you have to be excited for a program like this, because it is so beneficial to the kids.”

This story was originally posted in UC Riverside Today.