Add it all up, and you’ve got Susan Wojcicki, CEO of YouTube. Wojcicki recently joined Dean Judy Olian for the most recent installment of the Dean’s Distinguished Speakers Series.

Wojcicki had just graduated from Anderson in 1998 when she relocated back to the Bay Area. “I was thinking, okay, so I have student loans, houses are expensive. So I should be a good entrepreneur and rent out part of my house,” Wojcicki said. “Initially, I rented out my garage to (then Stanford Ph.D. students) Sergey Brin and Larry Page purely for the additional income. Little did I know that renting to these two entrepreneurs would turn out to be quite savvy.” 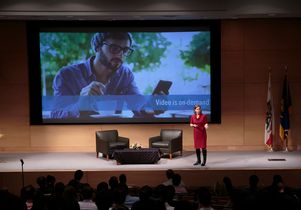 UCLA
YouTube CEO Susan Wojcicki is keeping her eyes on the next big trends: virtual reality and emerging markets.

The decision to take on the future co-founders of Google as tenants was the turning point in Wojcicki’s career. Her garage became the birthplace of the search giant,and she later joined the company as its 16th employee.

“Join a company where you believe in the product,” Wojcicki told the audience. At the time of Google’s start, it was one of many search engines on the market. However, when the service went down for one day, Wojcicki quickly realized how Google had transformed her life. “I couldn’t get my work done without it.” A strong product will have a differentiator, she noted.

To succeed in tech, advised Wojcicki, “Have insights about the future and carefully watch for the clues that the world is changing.”

At one time, Google had a Google Videos platform when user-generated content was a relatively new concept, Wojcicki explained. However, the platform quickly grew, with people all over the globe uploading videos. Contrary to all expectations, the first viral hit on the platform turned out to be a low-production video of two college students in a dorm room in China singing along to the Backstreet Boys’ hit “I Want It That Way,” while their unsuspecting roommate did homework in the background.

Soon after, a disruptive startup named YouTube started surpassing Google Video, and Wojcicki immediately caught on. “I knew it was going to be really big — but that it would come with a bunch of liabilities." Despite that, Google purchased the video-sharing service in 2006. She added, “Not everyone agreed with this purchase,” referencing Mark Cuban’s sweeping statement in 2006 that “Only a moron would buy YouTube.” This "moronic" investment is now valued at a whopping $70 billion for Google.

After YouTube beame a Google subsidiary, Wojcicki didn’t immediately transition over. She was busy building the advertising component of the company, Google AdWords. Google’s advertising division budget had ballooned from $5 billion to $50 billion.

“Think about building a long-term business," Wojcicki advised. "These relationships with people who buy ad space have to be a win-win for both parties. Focus on your revenue with a long-term perspective.”

Wojcicki now brings that same focus on long-term goals to her work as CEO of YouTube. “Important changes are often revolutionary, not evolutionary. Video is a huge market, and it is being remade. There are two things — VR (virtual reality) and emerging markets — that we are keeping our eyes on. We can’t be ready the day these two mature; we need to be prepared in advance. ‘Just in time’ doesn’t work with technology.”

Wojcicki also mentioned the challenges that come with use of the Internet in emerging markets — not everyone will use the Internet the same way, she said. YouTube is working on changing the experience so viewers can access content in an affordable way offline.

Wojcicki, who has five children, also took the opportunity to discuss an issue she is extremely passionate about: gender equality in the tech space. “Tech just doesn’t have enough women in it. This is an issue for society. We need to look at the overall technical influences and offer computer science at the middle school level,” she said.

In 2014, Wojcicki wrote a powerful op-ed about the benefits of paid maternity leave for businesses. Computer literacy is an important skill in today’s changing world, and learning these skills during high school is just too late, she said.

This story has been edited from one posted on the UCLA Anderson School website.