Neil Garg, professor and vice chair for education in UCLA’s Department of Chemistry and Biochemistry, has won the 2015 Gold Shield Faculty Prize, sponsored by Gold Shield, Alumnae of UCLA. The prize provides a $30,000 award in recognition of outstanding scholarship, teaching and service by an exceptional mid-career faculty member.

“We are delighted to award the prize to professor Garg in recognition of his commitment to excellence and innovation in research, teaching and service to UCLA,” said Tanis Harris, chair of the Gold Shield selection committee. “He inspires students to have confidence in their ability. He makes organic chemistry relevant.”

Garg also won UCLA’s prestigious 2014 Eby Award for the Art of Teaching and UCLA’s 2012-2013 BruinWalk.com’s Professor of the Year, among other honors for his teaching and research. In his award-winning research, his research group develops new chemical transformations that enable the synthesis of important organic molecules, such as pharmaceuticals and bioactive molecules found in nature that are often referred to as “natural products.” His laboratory develops synthetic strategies and methods to enable the synthesis of such molecules. 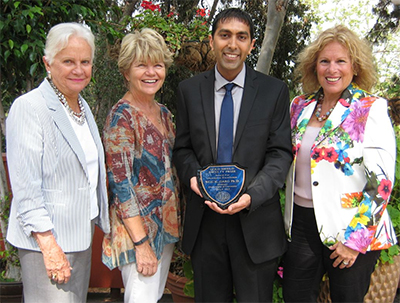 Garg recently shared secrets of his successful teaching techniques at the 2015 TEDxUCLA; a video of his talk will be posted this summer.

He enlivens students’ learning with interactive online tutorials combining real-life examples of organic chemistry, human health and popular culture. One tutorial noted that the popular pain reliever Tylenol, taken by more than 100 million people annually, can cause liver damage if overused, a result of oxidation and change in functional groups. It then asked students a series of questions about the oxidation reaction that occurs in the body after taking Tylenol. Another tutorial focused on chemical agents used in cosmetics, food additives and pharmaceuticals such as Pfizer’s cholesterol-lowering drug Lipitor.

Garg is now planning to expand these interactive online tutorials to students and educators worldwide.

He employs creative and effective techniques in his teaching, including assigning his undergraduates an extra credit project in which they produce music videos about organic chemistry, and an assignment in which honors students make videos about careers that incorporate organic chemistry, such as this video about being a chemistry professor. More than 300 of his students teamed up this quarter to create 98 new music videos, including clever chemistry versions of the songs “I Will Survive” and “Riptide.”

As a result of Garg’s innovative teaching techniques, his students are able to master extraordinarily difficult concepts and solve complex problems.

One of his students, Christine Nguyen, said, “I feel like Sherlock Holmes when solving retrosynthesis problems.”

Another, Aaron Lalehzarian, said his friends told him how difficult organic chemistry is, but Garg taught him, “It's not impossible. It's not even that hard. It's logical.”

Garg, his wife and their two daughters live in a campus residence hall as part of UCLA’s faculty-in-residence program, which enables him to eat meals with students, advise them, go on trips with them and inspire them daily with his passion for chemistry.

“Neil is the most passionate person about what he does I’ve ever met,” said second-year undergraduate Kian Samadian, who is in his class this quarter. “He’s easily the best professor I’ve ever had, and the best I probably ever will have.”