Chicago Mayor Rahm Emanuel had a busy day at UCLA on Feb. 12. His visit included touring UCLA’s student entrepreneur spaces, talking with students and Chicago business leaders at a roundtable about careers, and delivering the 2018 Luskin Lecture for Thought Leadership at Royce Hall.

Emanuel’s visit was part of the Think Chicago Roadshow, in which he and Chicago’s tech leaders highlight career-building opportunities in the Windy City to students at top business and engineering schools, like UCLA. Emanuel’s day on campus started with a tour that included StartUp UCLA, the design and innovation living learning community and UCLA’s new MakerSpace, a site stocked with software and design equipment such as laser cutters, 3-D printers and power tools. Following that he and the business leaders met with a small group of students.

“It’s important to create opportunities for students to meet with successful people like Mayor Emanuel to showcase the different paths to a successful and meaningful career,” said Deanna Evans, executive director of StartUp UCLA. “At Startup UCLA we usually bring in entrepreneurs for students to meet. This was an exciting opportunity because Rahm Emanuel is a high-profile public servant who understands the import role public policy can play in creating a thriving entrepreneurial ecosystem.”

Emanuel has served as mayor of Chicago since 2011 and has worked to revitalize the city’s roads, rails and runways with an $8 billion infrastructure plan. Chicago has led the U.S. in corporate relocation and foreign investment for four consecutive years, with more than 40 corporations having moved or having committed to moving to Chicago. Prior to being elected mayor, Emanuel served as President Barack Obama’s chief of staff and before that he served three terms in the U.S. House of Representatives and also as an adviser to President Bill Clinton. He is the fourth person to deliver the annual Luskin Lecture for Thought Leadership, which is sponsored by the UCLA College.

“The goal of the series is to learn how our leaders face moral quandaries, balance competing values and make life-changing decisions,” said UCLA Chancellor Gene Block during his welcome address. “We know from our own lives how difficult it can be to find the right answers and do the right thing. This is, of course, all the more difficult in the glare of the public spotlight, under the scrutiny of a 24-hour news cycle and the ever peering eye of the internet, when the well-being of millions will be impacted by the choices you make.”

Emanuel was introduced by Patricia Turner, senior dean of the UCLA College and dean and vice provost for undergraduate education.

Emanuel’s keynote speech, which was interrupted several times by demonstrators, touched on Chicago’s economic growth, how business works to support communities through the city’s Neighborhood Opportunities Fund, the city’s diversity, and his commitment to providing quality education for every child. He also spoke about the Chicago Star Scholarship Program, which provides high school graduates with a B average the opportunity to attend community college at no charge.

“Seventy percent of the kids who take it are the first ones in their families to go to college,” Emanuel said. “If you keep your B average in community college every university in the city of Chicago offers you 40 percent off your tuition … It’s the only public scholarship that a Dreamer can get in the United States.”

Following his speech, Emanuel joined Darnell Hunt, dean of social sciences in the UCLA College, for a discussion guided by questions submitted by UCLA students and alumni. Emanuel also addressed some of the concerns raised by the demonstrators.

Among them were the $95 million police and fire academy being developed for the West Side of Chicago, a plan that passed 50-0 in the City Council, despite opposition from some community members who felt the money should be spent on schools or other community programs.

“You’re going to have a state of the art police and fire academy. You’ll have 600 people that will be going there. It will have its own public safety benefit,” he said. “We’ve also agreed to not have a cafeteria in there because I want all those men and women, who are training, driving around the neighborhood going to diners and supporting local businesses, or creating them … A lot of people thought I shouldn’t do it, but the justice department report actually said that the facilities you have aren’t good for training police, so we have to build a new one. If I moved it in any other part of the city, we’d be missing an economic opportunity to put it in the West Side.”

“My responsibility does not end when the school bell goes off at the end of the day or the end of the year,” he said, “and I think those activities have helped support what happens between September and June and between 8 and 3 p.m. in a complementary way.”

Another question focused on Chicago’s history of poverty and gun violence, something Emanuel, who helped President Clinton pass the assault weapons ban, spoke passionately about.

“Last year we were down 22 percent on shootings,” Emanuel told Hunt and the audience. “It’s only February, but we’re down 34 percent this year. One is policing. We’ve created — with the University of Chicago — predictive analytics that help us know where a shooting will happen and do more proactive policing in that area. Second … I think we’ve got to help create a positive role model system for young men.” 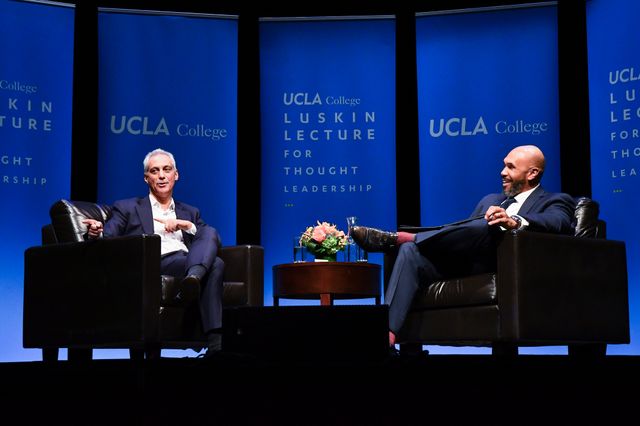 Adding to that, Emanuel said economic opportunity in neighborhoods is key, as is limiting access to guns, which can easily be bought in neighboring states.

“This has been walled off and festered and [has had] a long history and it’s going to take time to deal with both the public safety element of reducing gun violence that then creates the opportunity for the economic growth to happen.”

Prior to his talk at Royce, Emanuel was on the Hill answering student questions regarding lessons learned from his time in the White House, how he ended up working in public service and the intersection between entrepreneurship and the public sector, among others.

He also offered some advice to aspiring entrepreneurs, and shared his thoughts on failure, including his own.

“Don’t ever look back and say ‘shoulda,woulda, coulda,’” Emanuel said. “It is better to try and fail than to resent what you never tried to do … Don’t manage risk to the point that you don’t experience life.”