A cultural and economic corridor that celebrates the contributions of Southern California’s Black community is coming to South Los Angeles. Destination Crenshaw is a $100 million revitalization project that will bring public art, pocket parks and small business investment to 1.3 miles of Crenshaw Boulevard.

Helping bring this project to life? UCLA faculty and alumni.

Crenshaw is a neighborhood in transition. Construction of a light rail line connecting Crenshaw and LAX airport and the opening of SoFi Stadium in nearby Inglewood have boosted home values and brought in new businesses, while accelerating gentrification and displacement. Destination Crenshaw was incorporated as a non-profit in November 2017 to draw attention to the area’s Black history and culture.

“It was a way to kind of lay an anchor and say that this is a Black community, and we want to show that through our cultural heritage,” said Darnell Hunt, dean of social sciences in the UCLA College, and a member of the Chancellor’s Council on the Arts. Since 2017, Hunt has served as an advisor to the project at the invitation of city councilmember Marqueece Harris-Dawson, who is spearheading the initiative.

Members of Harris-Dawson’s staff had read “Black Los Angeles: American Dreams and Racial Realities,” a book that Hunt had co-edited with Ana-Christina Ramón at the Ralph J. Bunche Center for African American Studies at UCLA and published in 2010.

In his role as advisor, Hunt recommended key moments and figures in Black L.A. history to include. Marcus Hunter, a professor of sociology and the inaugural chair of the department of African American studies at UCLA, also became an advisor.

“UCLA was kind of the scholarly anchor,” Hunt said. “We were the place that was trying to make sure that they were staying true to the history.” 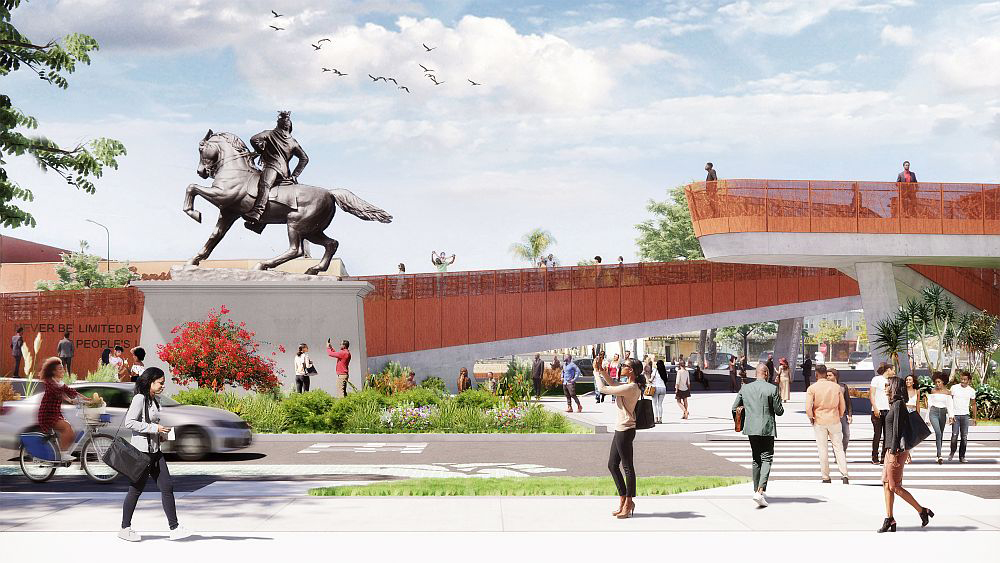 Destination Crenshaw took shape after the Metropolitan Transportation Authority announced plans to build the portion of the Crenshaw/LAX line between Hyde Park and Leimert Park at-grade, rather than underground. Area residents fumed at how building the line at-grade would bisect Crenshaw Boulevard in two, making it less walkable and thereby reducing the foot traffic vital to small businesses and a connected community.

Locals vowed to turn an insult into an opportunity, launching an ambitious project to upgrade infrastructure, build community gathering places and parks, add more than 800 trees, invest in small businesses on the boulevard, and install public artworks by local Black artists.

“Then it became a discussion about like, what does it mean to pass through?” Hunter said. “You want to invite people to get off, but also you want people to have some kind of experience or awareness of what they’re passing through on their way to downtown or wherever they’re going on the train.” 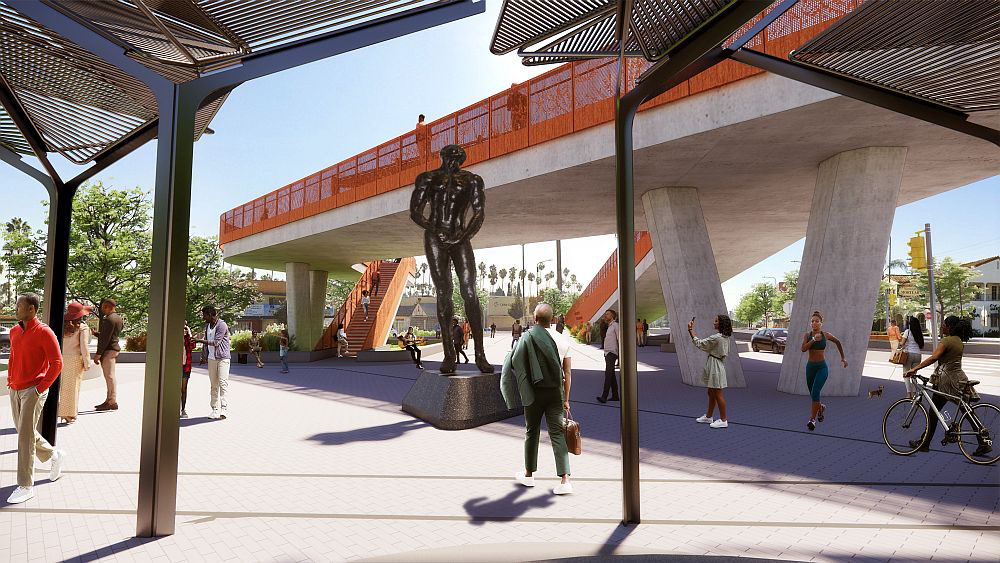 Destination Crenshaw, which spans Crenshaw Boulevard from 48th to 60th streets, will include a new “Afrocentric streetscape” design and six new pocket parks. More than 100 public artworks and exhibits, including monuments, statues, murals and augmented reality storytelling, are set to be included. 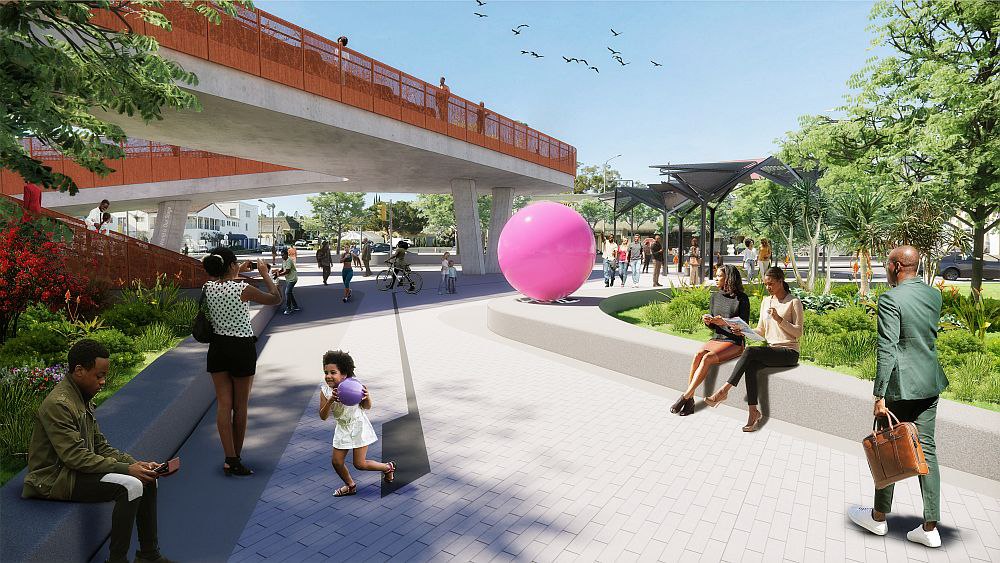 Hassinger, who was born in Los Angeles in 1947, recalls childhood visits to the May Company department store at the corner of Crenshaw and Santa Barbara (now Martin Luther King Jr.) boulevards. She graduated from Bennington College in Vermont with a bachelor’s in sculpture in 1969, and from UCLA with an M.F.A. in 1973. Her work often incorporates unconventional materials such as plastic bags, leaves and branches, wire, rope and found trash.

For the Destination Crenshaw project, “I knew right away that I wanted to do something that I hadn’t done before,” Hassinger said, “but I somehow wanted it to reflect on an L.A. experience. When I think of L.A., I think of bright and sunny and shiny and warm and loud and busy, and for some reason, I started seeing this pink sphere in my head.”

Hassinger’s sculpture will be installed on a grassy area at the center of Sankofa Park, an elevated outdoor plaza that Destination Crenshaw is building at 46th Street. “An Object of Curiosity, Radiating Love” is a large fiberglass orb, hot pink and six feet in diameter.

As people approach the orb, sensors will trigger it to light up and emit a soft pink glow. This sensation of a dialogue with passers-by is meant to evoke the community-minded spirit of a neighborhood in the midst of a dramatic and unsettling transition.

“So, it’s as if this warm hot pink thing said hello, or winked, or nodded. I want you to know, as a person walking by, that you’re noticed. You exist,” Hassinger said. 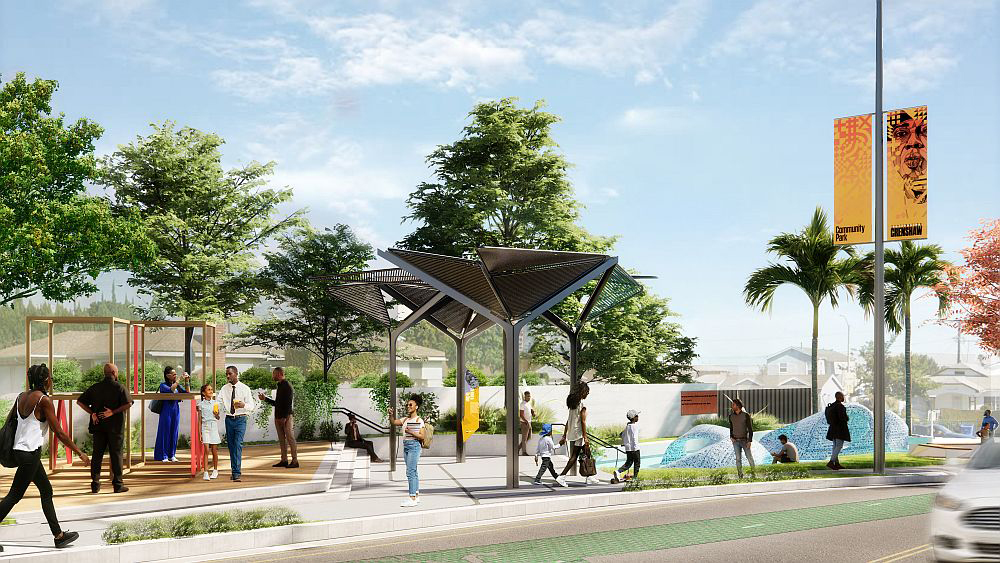 Rendering by Perkins&Will, courtesy of Destination Crenshaw
I AM Park featuring design for Brenna Youngblood’s work “I AM.”

Youngblood grew up in Riverside but visited South L.A. as a child, attending church with her family in Compton and South Gate. She now has a home and studio in the Crenshaw district.

“I’ve been here about six years. Not that long, but long enough to see some changes,” she said.

Youngblood received her bachelor’s of fine arts from Cal State Long Beach in 2002 and her M.F.A. from UCLA in 2006. In 2012, she participated in the Hammer Museum’s inaugural “Made in L.A.” biennial exhibition.

Her piece “I AM” will be installed toward the southern end of the route, near Slauson Avenue, in Welcome Park and I AM Park. The letters I AM evoke the posters carried by Civil Rights demonstrators that read “I AM A MAN.” The 8-foot-tall bronze sculpture resembles stacked toy blocks with letters along the sides spelling out I AM. The blocks also look like a jungle gym, which speaks to the formative role of language in shaping identity. The sculpture is a reimagining of one of Youngblood’s earlier works, “MIA,” (2011).

“I think that people will enjoy it because it’s a sculpture that you can touch, that you can crawl up on,” she said.

A tribute to history based on meticulous research

Harris-Dawson’s Council office asked Hunter and his UCLA students to add historical context to Destination Crenshaw. Hunter and 10 graduate students pored through the archives of the African American newspapers California Eagle and the Los Angeles Sentinel to revisit L.A. history from 1850 to 2015. The students presented their research to the design team of Perkins&Will, the architect-of-record for the Smithsonian Institution’s National Museum of African American History and Culture in Washington, D.C., which they worked on alongside design architect Adjaye Associates.

What became clear, Hunter said, was that any conversation about Black L.A. history has to start with Bridget “Biddy” Mason. Born a slave, Mason became one of the first prominent citizens and landowners in Los Angeles in the 1850s and 1860s. Working as a midwife and nurse, she used her money to purchase land in what is now the heart of downtown. The investment made her the wealthiest Black woman in the city. She donated to charities, fed and sheltered the poor, visited prisoners and founded the First African Methodist Episcopal Church in Los Angeles in 1872.

“[Mason] is the godmother of Black LA. You cannot talk about Black Los Angeles without talking about her,” Hunter said. People passing through this area “need to see her or experience something about her.”

Other historical markers will track Crenshaw’s role in shaping the nation’s cultural imagination. Crenshaw has been home to many prominent Black entertainers, such as stand-up comedian Redd Foxx, rapper Ice-T, and singers Ray Charles, Ike and Tina Turner and Nancy Wilson. It was also home to the hit TV show “Soul Train,” which host Don Cornelius started in Chicago in 1970 but brought to L.A. the following year. Local high school students packed Soul Train’s stage to show off fashion styles and new dance moves that were then copied by teens across the country. 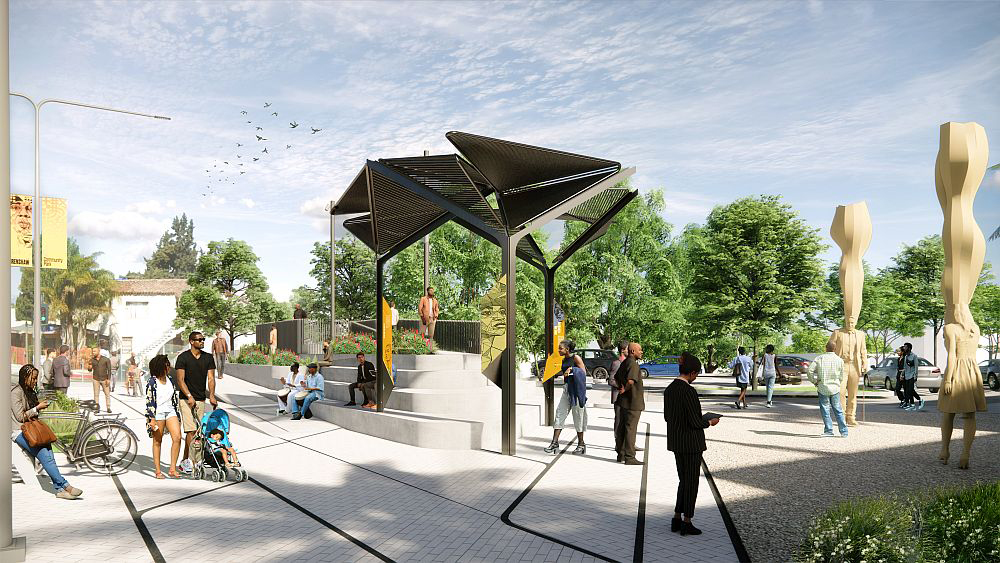 Mapping the movement of Black L.A.

Because of redlining and racist housing policies, the neighborhood’s early residents were almost exclusively middle-class and upper-middle-class white families. Former L.A. Mayor (and UCLA alumnus) Tom Bradley and his wife needed a white intermediary to buy their first house in Leimert Park in 1950, while he was serving as a Los Angeles police officer and prior to his entry into politics. After the U.S. Supreme Court struck down racially restrictive housing covenants, Japanese American families began to move in, and the center of the city’s Black population shifted west from its longtime home along Central Avenue.

However, Hunt continues, “after the ’92 Uprising, a lot of Blacks moved into the Inland Empire for cheaper housing and schools. And for the first time the Black population actually declined during that decade.” Despite this migration to the Inland Empire, Crenshaw’s population remains above 60% Black, while other former Black strongholds like Watts are now predominantly Latino.

“Crenshaw and the surrounding areas, Baldwin Hills, View Park, is still a heavy Black concentrated population, and parts of it are middle class and upper middle class, which is kind of unique,” Hunt said, describing the Crenshaw neighborhood as the “center of gravity” for the community. “It’s where a lot of the action is concentrated, even though it’s not inclusive of the entirety of Black L.A.”

Construction on Destination Crenshaw slowed during the height of the pandemic, but work is now moving apace, and organizers expect the project to be completed by spring of 2023, and to debut the seven permanent artworks before next fall. Fundraising now stands at about $72 million, and the Getty Foundation has provided $3 million to commission and fabricate the first seven sculptures, as well as plan for their conservation. The project, which aims to include more than 100 works of art by Black artists, will continue to commission new works in order to create what’s billed as “the nation’s largest art and cultural celebration of African American contribution to world culture.”

And while the new streetscaping, pocket parks and large-scale sculptures may lure passengers off the train, the project is largely aimed at boosting local businesses and catering to those who live in the district, not just pass through it.

“It’s definitely for the Black community. It’s about staking claim to our history, our culture, and making sure that those stories are remembered,” Hunt said. But, he added, Destination Crenshaw can also raise awareness that “this is a signature Black community that has a history and is connected to a broader history in L.A.”