It has been 11 years since Mackenzie Clay experienced something that would forever alter his life. Then a high school senior Clay was in the final week of his school’s wrestling season when his neck was broken during a team practice.

“We were doing double leg take-down drills, and I got picked up and launched backwards,” said Clay, who at the time was a varsity athlete in three sports and cellist in the Seattle Youth Symphony Orchestra. “A couple of other guys were doing the same thing nearby and we collided mid-air. Immediately I was shocked and confused. I have vivid memories of looking up at the ceiling and seeing the lights there. I knew something was wrong because I couldn’t move anything and nothing felt right.”

The accident left Clay, now 29 and a doctoral candidate at UCLA, paralyzed from the neck down with limited function in his arms and wrists.

“I almost went to school to become a cellist. I always thought that no matter what, I’d always have that. I have an aunt who is paraplegic and I thought that even if I was ever in a wheelchair I’d still be able to play cello. That’s before I knew this could happen and I could be a quadriplegic and not be able to use my hands at all,” Clay said. “That was one of the few things that made me cry in the hospital in the early days. It seemed like everything I wanted to do was a reminder of what I couldn’t do anymore, so that was definitely a hurdle.”

Nevertheless, Clay graduated with his peers that spring as valedictorian, and enrolled at Seattle University just a few months later to pursue a bachelor’s degree in chemistry with a minor in mathematics. His twin brother, Cameron, also a student at Seattle University, was his college roommate and primary caregiver as Clay learned how to do as much as he could for himself again, like putting on his pants, cooking, getting in and out of bed and driving. As an undergraduate, Clay was a fixture on the dean’s list, was named a Bannan Foundation Scholar and received the Outstanding Senior Chemistry Major award.

Today, he lives independently, drives, dates and plays wheelchair rugby and basketball, and is studying chemical and biomolecular engineering at the UCLA Samueli School of Engineering, where he is also a graduate student researcher. He is also a Eugene V. Cota-Robles Fellow, an honor given to selected graduate students who plan to pursue a career in teaching at the college level and research. 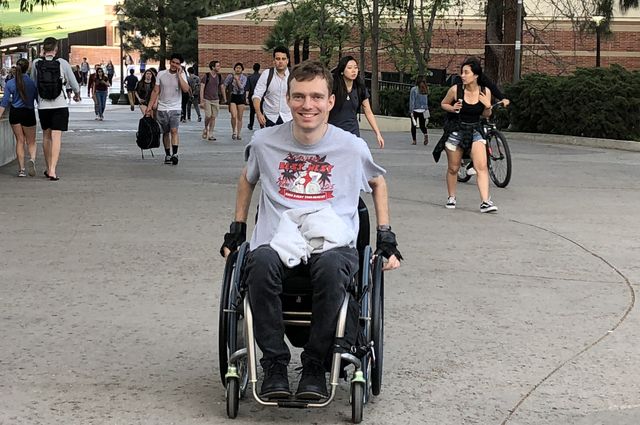 Clay works in the lab of UCLA professor Harold Monbouquette performing mathematical computer modeling to determine the optimum thickness of coatings to be applied to brain sensor electrodes that monitor the concentration of specific neurotransmitters over time.

His research interests have more recently expanded into neuroscience, a topic he finds fascinating because it’s focused on the brain and how people think, and explores the neurological signals that travel along the spinal cord.

“It’s all super interesting,” he said. “I want to become a professor, and that will involve doing my own research, so it would be cool to move into that.”

Clay is one of seven Bruins who will be honored by the UCLA Healthy Campus Initiative and inducted into the new UCLA Eudaimonia Society. The event honors those who demonstrate eudaimonia — a word coined by Aristotle to describe the enduring happiness that comes from living a life with purpose and meaning. It will be held from 5:30 p.m. to 7:30 p.m. on April 24 in the Pavilion Club in Pauley Pavilion.

Recipients were also selected based on qualities such as their impact on UCLA, resilience, generosity, determination, personal sacrifice, selflessness and dedication to the common good, and how they inspire others.

Clay was nominated by senior statistics major Carolanne Link, who met him last fall while waiting for the campus accessibility van to pick her up near the Math Sciences building. A wheelchair user who lives with cerebral palsy, Link said she noticed Clay almost immediately as he made his way past her.

“Like me, he uses a power-assist wheelchair, which has a motor that kicks in with every push and lets you go farther,” Link said. “This is super integral in this terrain like UCLA where there are a lot of hills.”

She and Clay chatted about the wheels and about his condition for about 10 minutes, and later connected on Facebook and met for lunch to share their experiences as wheelchair users on campus.

“I was just astonished by his composure as a person and everything he was doing with his life,” Link said. 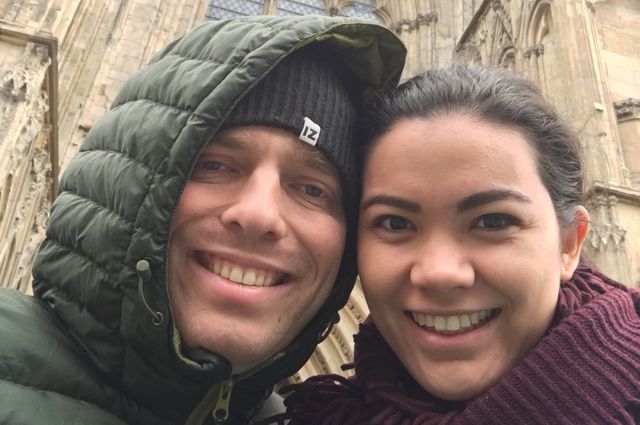 Their friendship later blossomed when the Skirball Fire burned through parts of Bel Air in December. Because respiratory health is critical to reducing health risks and optimizing life expectancy in people living with cerebral palsy, Link’s parents insisted that she fly home to Oakland immediately. Instead, she texted Clay to ask if she might be able to spend a few days with him at his wheelchair accessible home in Culver City until the air cleared. He agreed without hesitation.

“The thing that stood out to me about him was that he took me in without really knowing me that well — just trusting on goodwill that I would be a good house guest,” said Link, who started dating Clay shortly after.

The event also includes a TEDxUCLA salon on altruism featuring UCLA neuroscientist Marco Iacoboni, professor of psychiatry and biobehavioral sciences and director of the neuromodular lab at the Ahmanson-Lovelace Brain Mapping Center. Iacoboni is known widely for his studies of “mirror neuron systems” and who is the world’s leading investigator of the brain functions that support altruism. Manal Aboelata, managing director of the Prevention Institute and a major international contributor to knowledge about how to best promote community well-being, will also be a featured speaker.

“I think we will all come away from this event inspired to do what we can to make our community stronger through altruistic actions, and help make the world a better place,” said UCLA professor of psychiatry and psychology Bob Bilder, co-director of Healthy Campus Initiative MindWell, which organized the Eudaimonia Awards program, and chief of medical psychology-neuropsychology at the Semel Institute for Neuroscience and Human Behavior. MindWell is one of seven pods, or thematic working groups, that comprise the Healthy Campus Initiative. Its mission is to promote well-being, resilience and creative achievement throughout the UCLA community.

The April 24 event is free and open to the public. Refreshments will be served. Guests must register because seating is limited.

On May 9, Clay will speak about his experience as a scholar and a person living with quadraplegia as part of “HCI Revolution: Together we thrive!,” which will be held in Pauley Pavilion.

The event, which begins with pre-program festivities from 4:30 to 6 p.m. followed by the main event from 6 to 7:30 p.m., is open to the public and highlights the importance of social well-being. It also features a variety of other panelists, including Chris Meledandri, CEO of Illumination Entertainment, and UCLA psychology professor Martie Haselton, author of “Hormonal,” live performances, an awards presentation; free food, prizes and giveaways. Tickets are free to the first 1,000 people who RSVP.

“People in my life, in general, whom I’ve met who have disabilities, especially a disability that comes later in life, as opposed to one that they’re born with, usually have a hard time adjusting,” Link said. “They often focus on what they used to have and they get very bitter about what they’ve lost, but that’s not Mac’s outlook at all, and I love that … I think he’s amazing.”