On Feb. 24, UCLA opened its first-ever esports training facility, in the John Wooden Center. The eight dozen or so members of UCLA’s nine competitive online gaming teams celebrated finally having a place to hold practices, scrimmages and tournaments together, elated at their newfound sense of community and legitimacy.

Of course, by mid-March, the COVID-19 pandemic meant that all sports had to cancel in-person practices. But while sports like basketball and baseball went on hold, esports could continue, albeit from bedrooms at home and on individual computers.

“We’re not happy that we’re the only competitive sport right now, although we’re grateful that we can operate,” said Cole Schwartz, one of two full-time esports coordinators for UCLA Recreation. “But we want to be back in the normal world. Nothing defeats the stigmas against gaming more than people of all races, classes and genders gathering in a room together to compete.”

While UCLA’s esports teams have been scattered, the industry as a whole is experiencing a boom during the pandemic as one of the only remaining live sports. NASCAR quickly arranged eracing, pitting their regular drivers against experienced eracers, complete with sponsorships. The NBA ramped up existing efforts to promote basketball stars playing virtual versions of themselves in NBA 2K, and the NFL pushed celebrity Madden tournaments. Outlets like Fox Sports and ESPN aired them all and even broadcast competitions of some traditional esports, like Overwatch, Rocket League and League of Legends.

“That’s opening up a lot of eyes,” said UCLA Esports coordinator Sunny Yen. “People used to get very upset if ESPN broadcast esports. And now we’re in a place where people are giving it more of a shot and realizing they like esports.”

For fans of more traditional sports, the past months may have been their first exposure to the $1 billion-a-year global industry, which features not only independent gamers but competitive professional teams whose top players can rake in seven-figure salaries. In recent years, scores of colleges have gotten onboard, forming their own esports programs, seeking out sponsorships and competing in industry-backed contests for scholarship money. Esports has become a big deal.

It’s more than playing video games, senior Ashley Denktas agrees. The student director of UCLA Esports, Denktas was part of the original group that became UCLA’s first official esports club in 2018, and she helped lead the club in forming its own invitational tournament earlier this month. More than 20 colleges participated in the UCLA Esports Invitational, including powerhouses like UC Irvine, where, in 2016, UCLA alumnus Mark Deppe helped develop the first official esports program at a public university. Denktas said tournaments like these are an important way to keep the esports community engaged.

“It’s like any sport, where we’re building camaraderie with friends, and it’s just as valuable a pastime as other sports,” Denktas said. “In general, gamers get a bad rap. But in my experience at UCLA, everyone’s been very welcoming, and I’ve been comfortable as a woman in a leadership position. This is a community that shares an interest and a passion and enjoys hanging out and supporting each other.” 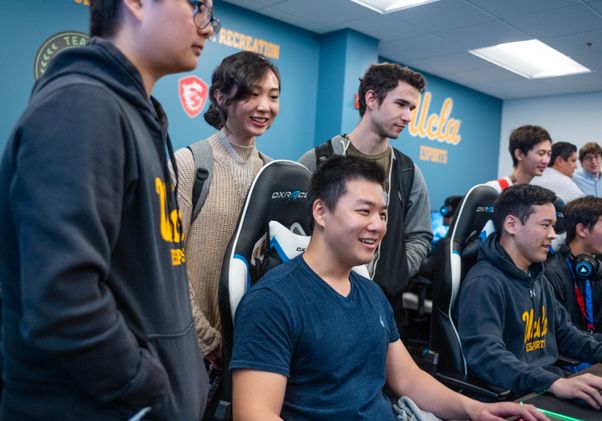 Jason Keany/UCLA
UCLA’s Esports Training Center opened on Feb. 24 for a few weeks before closing due to the COVID-19 pandemic. Above, players from UCLA’s esports teams admire the new equipment and watch teammates play.

That sense of togetherness is what she misses most right now. With the new on-campus training center, players could cheer each other on or turn to a teammate and congratulate them on their play, she said.

“And we would go out for boba or hold fundraisers,” Denktas said. “Hanging out online isn’t the same. Even though everyone’s still active, we’re still saying, ‘Man, I wish we could all go out for Korean barbecue again.’ It’s especially sad for the seniors to have it taken away.”

UCLA has both varsity and junior varsity teams for League of Legends, Overwatch and Hearthstone and one team each for Rocket League, Dota 2 and Super Smash Bros. Ultimate. The games run a wide gamut — several are battle-oriented, with warriors and healers, while Hearthstone is a card game and Rocket League involves rocket-powered race cars playing, essentially, soccer.

Currently, Denktas has given each team’s manager a specific game night within the groups’ Discord space, a communications hub where players can chat while streaming their gameplay. But for teams with lots of international students, a combination of time-zone differences and the few seconds of lag time over the internet can make practices and games together impractical, Denktas said. Others can still play but may have left their equipment or fast internet speeds behind when they moved back home.

“It’s not debilitating,” Denktas said, “but we have some players with iffy connections. Without the right equipment, they feel like they can’t play at their best level.”

Denktas doesn’t play on the teams herself but has long been a spectator of Overwatch, a team-based shooter game played by two opposing teams of six.

“I always played games with my family,” she said. “And I’d stay up all night watching Overwatch World Cup matches. I realized in 2016 that there’s this whole industry around this game I’ve put my heart and soul into.”

Though some of the players are interested in going pro, several are interested in the broader esports industry. Schwartz and Yen — the former UCLA roommates-turned-staff who manage UCLA’s competitive esports program — have a vision of helping people in the video game community connect and find their niche in the burgeoning field.

“It’s a very common but restrictive thing for people to think, ‘I love video games, but the only way to get involved is play them or develop them,’” said Yen. “But when you talk about football or basketball, there’s a lot that goes into supporting the players and the coach. There are the people managing the arenas, the marketing teams, commentators, camera operators. There are parallels in esports.”

“Right, some companies decide that esports spectating is really important to them and build in camera work,” Yen said. “I’ve talked to a lot of gamers who feel like they gave up on their dream, but you can make a living in your passion without learning to code.”

Senior Naveen Sheik lives with a foot in both worlds, as a player for the varsity Overwatch team and marketing director for the UCLA club sport as a whole. His team continues to hold two-hour practices and scrimmages, usually two or three evenings a week. To keep the teams engaged and give them practice building an audience, Sheik has set players up to stream their gameplay live on the UCLA Esports Twitch channel. Twitch, a live-streaming service that primarily caters to gamers, saw its global viewership double as other sports went into lockdown.

“I didn’t grow up with esports, but my 5- and 6-year-old cousins are growing up with it,” Sheik said. “I think this increase in viewership is going to have a long-term impact, where people will see it as the norm.” 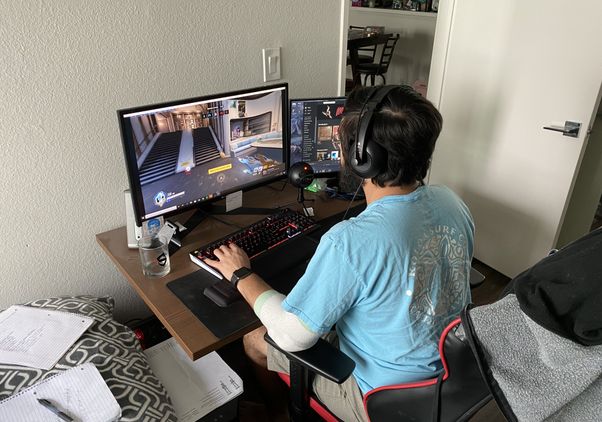 Courtesy of Naveen Sheik
UCLA esports varsity player Naveen Sheik plays on the Overwatch team from his room during the COVID-19 pandemic.

The growth in esports is a bittersweet success, he said. He was preparing to launch UCLA’s streaming program in April and had to postpone and scale-back that and other plans.

“There’s so much that I miss right now,” Sheik said. “I miss going out to eat with friends. I miss going to the gym to get out energy and adrenaline before a game. I miss that entire college experience, seeing and talking to people you don’t know. It would have been nice to have a normal graduation. It just feels like there are no proper goodbyes for me.”

Schwartz and Yen also point to a host of community-building programs that couldn’t get off the ground because of the pandemic, including a workshop to teach competitors healthy habits for sitting, stretching and eating, and plans for an esports gym group. An initiative to assist Los Angeles high schools in developing their own esports programs also slowed down dramatically as schools' priorities shifted.

Several players pointed to UCLA’s new esports training room as the biggest part of making the various teams a community. The games can be very different, but when all the teams play in the same space, they can get to know each other.

“I miss seeing teammates and being able to talk to them directly,” said sophomore Noah Cook, who plays on the varsity League of Legends team. “I’m really good friends with some of the Overwatch players now because we were all in the training room together.”

Cook recently began doing “casting,” or commentating, for esports games on UCLA’s Twitch channel. He hopes to have a career in esports, whether as a player, coach, analyst or caster.

For Sean Moore, a first-year student on the Overwatch junior varsity team, the pandemic quarantine has actually meant more practice time, since many of the players have so few other activities right now. But the team has to be careful not to scrimmage on their main UCLA accounts against just anyone, he noted.

“Our team manager sets us up against another team with a similar rating so that we don’t lose skill points,” said Moore, who spent the summer before coming to UCLA playing furiously to build up his own skill level. “Losing skill points isn’t like getting injured and benched, but it’s just that we’ve earned those ratings, and we don’t want to lose them on a practice session testing out a new strategy.”

For now, many of the players are just itching to get back to normal — and back to tournaments, said Yen and Schwartz.

“Most of the tournaments with the scholarship money that we compete for got canceled,” Yen said. “But colleges are stepping up to host their own. We just have to get permission because these games are intellectual property. See, no one owns basketball. Somebody owns League of Legends.”

But until “normal” returns, the players can at least take some comfort from the boom in esports.

“I think it’s very unfortunate that it took a pandemic to make people realize the potential of esports,” Schwartz said. “We’re not happy about it, but we see light at the end of the tunnel.”