Nearly 30 years ago William Herrera was a newly minted technical school graduate in Santa Ana, El Salvador. But this was not an occasion to celebrate. Herrera, who had studied industrial engineering and computing, feared for his future if he stayed in his country, which was in the midst of a decades-long civil war. Although Herrera had grown up surrounded by economic and political unrest, and the corruption and violence that fueled it, he was now of an age where the stakes were mounting.

“It was very difficult for someone my age to be there,” said Herrera, who now works as a lead stationary operating engineer in UCLA Housing and Hospitality Services. “In the colleges and universities, the left — the guerrillas — would try to recruit you, and in the street the soldiers tried to recruit you. You weren’t safe anywhere. So one day, I told my father I needed to leave.”

It was a difficult choice filled with risk and struggle, but one he says he would choose again and again. This sentiment holds true now more than ever as Herrera and his wife, Nora, prepare to watch their son, Kevin, graduate from UCLA on June 15 with a degree in ecology and evolutionary biology and with a minor in evolutionary medicine.

Kevin thanks his mother’s persistence in pursuing her own education coupled with his father’s humble nature and drive to provide a safe and secure life for his family for molding him.

“I’m always working hard, but it never feels like I’m working as hard as they had to,” said Kevin, who plans to work for the next couple of years and then apply to medical school. “My parents worked hard to survive, and that has given me an appreciation for what I have here. It’s hard because my parents see themselves in the new immigrants they see coming here now. As a Central American you have to go through multiple countries to get here, and then once you get here you need to find a job and find a place to live and just get started.”

From El Salvador to Los Angeles

William was just 19 when he told his father, Camilo, that he knew someone in Los Angeles who would meet him and help him get on his feet. His father, confident in his son’s skills and knowing a man who was leaving for the United States with a group of about a dozen people in the days to follow, respected his son’s decision and arranged for him to go with them.

After about a week travelling through Central America and Mexico on foot and by bus and train, William arrived at the U.S. border. There he asked for political asylum and completed the necessary paperwork for entry. 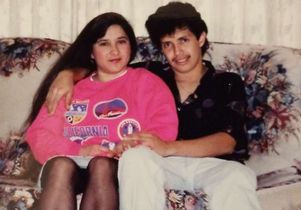 Courtesy William Herrera
William and Nora Herrera in their home in Los Angeles in 1991.

“It was a good trip,” he said. “Not like the immigrants today who have to suffer much more. They have it much worse than what I had.”

Within hours William was in Los Angeles at the corner of Vermont Avenue and Martin Luther King Jr. Boulevard with nothing more than a few belongings and $70 tucked in his right shoe.

“I didn’t know anybody,” said William, who admitted that he’d lied to his father. He spent his first night in the city sleeping on a bus bench. It was the first of several.

The following day, he set out on foot to find a job in the downtown area. He saw several “help wanted” signs along the way and inquired wherever he could, but without a home address no one would give him a job, he said. He continued walking and ended up at MacArthur Park, an area with a large Central American population. He asked if anyone knew where he could find work.

“They said I needed papers.”

Not giving up, he found a radiator repair shop at Vermont and Pico that had a “help wanted” sign in the window. William had experience working with his father in his family’s radiator shop. He walked in and asked for the owner.

When the owner learned where William was from and that he’d worked in his father’s shop, the man said he knew there were only two radiator repair shops in William’s hometown and that he knew both shop owners.

“He said, ‘Don’t tell me you’re Camilo’s boy,’” William recalled. It turned out that the man was an old friend of William’s father.

William worked full time for the man and later at a sewing factory and at a local university doing painting, electrical and mechanical work and fixing food service equipment. All the while he was attending classes in the evenings and on Saturdays to become an HVAC technician and earning certifications in plumbing, electricity and steam plant operations.

During that time, his longtime girlfriend, Nora, whom he met and fell in love with in El Salvador, joined him in the United States. The couple married in 1992 and welcomed Kevin five years later. William started working at UCLA in 2000, first as a food service technician and later as a steam operator. Now, as a lead stationary operating engineer, he co-leads a team of 23 employees to ensure that heating, ventilation, air conditioning and other utilities are working in the residence halls.

In addition, after years of having to renew their political asylum status, William and Nora received permanent residency in 2003 and became U.S. citizens in 2008.

One of the results of these blessings was that William could sometimes bring his young son to campus. Kevin was an observant child who paid attention to everything around him as they walked around the Hill, down Bruin Walk and throughout campus. 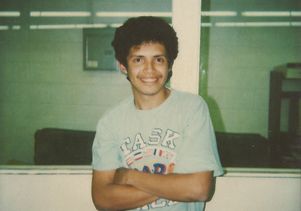 “I would tell him that someday he would come to school here and that it would make me really happy to one day see him graduate from UCLA,” William said.

Kevin, who said his earliest memories of UCLA include collecting leaves, chasing squirrels and watching the resident assistants at work, recalls the night when he opened up his email to receive a message telling him that he was about to become a Bruin. He was at the YMCA finishing up a volunteer shift and he immediately called his father to tell him the news.

“I didn’t even care about hearing from any other school,” Kevin said. “I knew where I was meant to be. Up until high school, UCLA was a concept, a place. In high school for me, it meant my next step. As a college student, it was more than I imagined it would be.”

William took the call on his way to pick Kevin up.

“He said, ‘Hey Papi, guess what? I just got accepted to UCLA,’” William said. “Luckily, I was only one block away. My heart was going crazy. When I got to the YMCA I got out of the truck and just hugged him. And I cried.”

Kevin moved onto campus early for his freshman year and served as a move-in assistant. He also worked the front desk at DeNeve and later as a resident assistant in Sproul Hall to help pay for his college expenses.

“I always thought that being an R.A. would be the best job to have,” Kevin said. “You get to go to college and have fun.”

Building community and developing programming was one of his favorite parts of the job, Kevin said. He even had an opportunity to bring his Salvadoran culture into his work by running a pupusa making workshop.

“I got to teach my residents about typical Salvadoran cuisine,” he said. “It was just great and all my residents loved it.

“As an R.A. I also made it a point to tell my residents to be courteous and kind to the staff because they work hard, they’re super nice people and they always work with a smile on their face,” Kevin continued. “So clean up after yourselves and put your trash in the trash.” 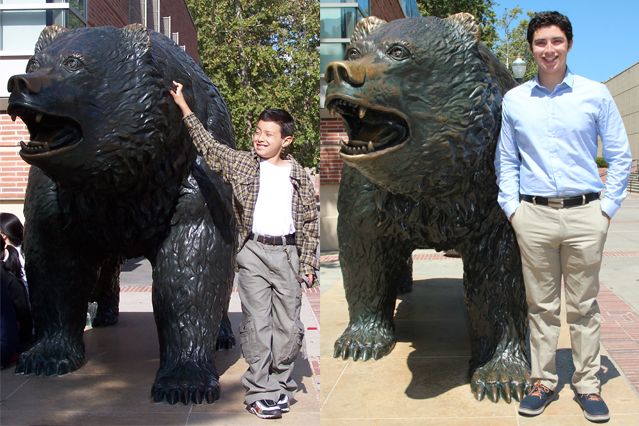 UCLA
Kevin Herrera when he was 8 years old and now at 21.

Some of the same staff members who knew Kevin when he was a little kid exploring campus still work on campus and have been happy to see him on campus as an undergraduate, William said.

Kevin, an aspiring doctor, was also a member of UCLA’s taekwondo club, serving as vice-president in his junior year, assisted a UCLA professor with neurological research related to multiple sclerosis and worked at Cedars-Sinai.

“For me, a career in medicine mixes the human aspect of the job and the science,” said Kevin. “You get to help someone while doing something that’s fascinating.”

Becoming a doctor was once his mother’s dream but because of the civil war that didn’t work out, Kevin said. After moving to the United States his mother worked as a nanny for nearly two decades and for many of those years juggled her community college studies to become a certified nursing assistant, a position she currently holds.

“The fact that she worked so hard to do something she loved was inspiring,” Kevin said.

Watching his parents’ dedication to education while raising him and attending to other responsibilities was something that reinforced his commitment to service.

“My wife and I just gave him the tools and he ran with them,” William said. “He has done everything himself and we have supported him as best we can.”