Alphons Smit remembers well the day when he first met his son Walter.

It was 2005, and Walter Mancia, then 17, was selling fruit at the corner of Avenue 42 and York Boulevard in L.A.’s Eagle Rock neighborhood. The boy didn’t speak a word of English, so Smit and his husband, Clifford Lee, who were taking a walk through their neighborhood, communicated with him in his native language, Spanish. Day by day, they learned about Mancia’s former life in Honduras and how he arrived in Los Angeles on his own, determined to go to school and be successful.

“Walter’s outlook has since changed from that of a recent immigrant with lots of hope to one that comes as the result of a string of real accomplishments,” said Smit. “The constant, through these changes, has been his clear focus to make something of himself and to be a burden to no one. Trust me, it is laser-sharp and honed through his fight to survive in his early years.”

The couple will attend the departmental commencement ceremony on June 13 to see the man they call their son walk into Ackerman Ballroom in his cap and gown and graduate with a bachelor’s degree and honors.

“That will be a wonderful moment,” said Smit. And his American parents will also be cheering Mancia on this fall as he starts a Ph.D. program in cancer biology and cell signaling at UC San Francisco.

For years, Mancia dreamed of going to school and earning a decent living. But as the child of a single mother of four in rural Honduras, he had to quit school after the seventh grade because his mother couldn’t pay the $100 required for books and school supplies.

He then worked 12-hour days to help support his family, earning just $1 or $2 a day while he watched his friends go to school. He knew that without a high school education, his future was limited.

“I was nothing in my hometown,” said Mancia. “If I had stayed there I would have had to work in the fields cultivating corn or coffee or maybe become part of organized crime. There just isn’t a lot of opportunity.”

So at 13, he left home to trek throughout Guatemala, El Salvador and Mexico in search of work before making his way to Los Angeles in search of his father. “I heard that he was in L.A., so I thought I’d come to the U.S. and look for him, and maybe he could help me. But that didn’t happen. He wasn’t here anymore.”

Finding a home — and two fathers

His third attempt at crossing the border into the U.S. was successful, but the only job he could find in L.A. was selling fruit for 60-70 hours a week, with almost all of his $125 salary going toward paying off the coyote who helped him get into the country. 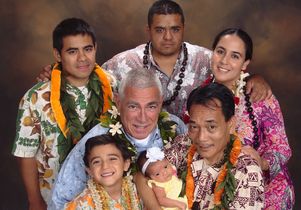 Courtesy of Alphons Smit
UCLA graduate Walter Mancia, back row, left, and his American family. Pictured next to him are his brother Andres and sister-in-law Fatima, along with fathers Alphons Smit and Clifford Lee below. In the first row are shown his nephew Allyn Roland and baby niece Andrea.

Smit and Lee learned of Mancia’s arduous journey and found out that, although Mancia wanted to learn English, classes were out of the question since he worked day and night under the tight control of his employer, with whom he lived.

When Mancia was arrested for selling fruit without a license, his first call was to his employer, who did nothing to help him. His next call was to Smit and Lee, whom he’d known for only a few months. But they didn’t hesitate to go down to the police station and bail him out.

“At that point, we had to make a decision about whether we should take him in and help him,” said Smit. The couple had previously opened their home to another disadvantaged young man, their son Andres, who had since grown up, moved out, gotten married and started a family.  “We knew we could give Walter his own room, a balanced life, a quiet home — a dependable, reliable, predictable environment. So, that’s what we did.”

Because of their generosity and confidence in his abilities, Mancia focused on becoming the person he knew he could be.

“They became my family, right up to this day,” said Mancia.

He began school the same day he moved into the Smit-Lee home. “That really impressed me,” said Smit. “He was singularly focused.”

Mancia learned English, became a student council member and earned his GED at Evans Community Adult School. He also captured the school’s achievement award and won scholarships from the Friends of Chinatown Library, the Associated Administrators of Los Angeles and the Salvadorian-American Leadership and Education Fund. As an AB540 student who qualified under state law to pay in-state tuition at public colleges in California, Mancia enrolled at East Los Angeles College with the thought of becoming an automotive technician like his brother Andres. Instead, he graduated with an associate degree in molecular biology and transferred to UCLA in 2012 with the hope of one day becoming a researcher or professor.

“I didn’t know that I wanted to go to college in the first place, but as I went along, I learned of new opportunities,” he said. “I didn’t even know that undocumented people could go to school at all.”

Finding his footing in science

Mancia said he discovered a love for science while taking biology and chemistry classes at community college. “I wanted to do research, and I thought that UCLA was the best place to go.”

Working in the lab of biological chemistry professor Kathrin Plath, Mancia, who's majoring in molecular, cell and developmental biology, now studies non-coding RNAs and stem cells. This work, which he presented last fall at the Society for the Advancement of Chicanos and Native Americans in Science (SACNAS) national conference, may advance our understanding of basic cellular mechanisms of how non-coding RNAs work and may one day have potential implications in regenerative medicine, he said.

“Walter is a very determined person,” said Plath. “I am glad he got into a great Ph.D. program and look forward to see him making discoveries as a graduate student.”

Additionally, Mancia has been involved with the UCLEADs program — a two-year undergraduate research fellowship — and SACNAS at UCLA.

Diana Azurdia, an assistant director at UCLA’s Undergraduate Research Center and staff advisor for UCLA’s SACNAS chapter, met Mancia shortly after he enrolled at UCLA. Azurdia learned about his aspirations and helped him find opportunities to reach his goals.

“He’s just been amazing,” said Azurdia. “He’s worked hard to be where he’s at. Of all the students I’ve worked with, Walter stands out as someone who takes advantage of the opportunities presented to him. And he really fights to do well.”