When UCLA political science graduate James Anderson crosses the commencement stage this year, like his fellow members of the class of 2017, he’ll do it proudly, with his eye on the future.

The Los Angeles native will also carry with him a powerful record of service to his community and to hundreds upon hundreds of people across California and the country. He’ll carry the memory of meeting Barack Obama in the White House, telling the then-president his plans to go to UCLA, the only school he ever dreamed about attending.

Anderson will also carry his past. This month not only marks the culmination of his college dream, but also commemorates the five-year anniversary of his release from prison.

And deep down he’ll also carry his future political aspirations.

“I’m focused on changing narratives,” Anderson said. “For myself, and for others. I’ve been through so much, there’s nothing that’s going to make me fail or fall, and if I do, I’m going to get right back up.”

Anderson’s upbringing in the Santa Clarita Valley was defined by poverty, physical abuse, trauma, gang violence and drug use. He was in and out of jail before a conviction on an assault with a deadly weapon charge when he was 17 left him sentenced to seven years in the California Youth Authority. Anderson ultimately spent three years in state prison.

Somehow, the 24-year-old has alchemized those experiences into a boundless sense of joy and compassion, punctuated by a purpose-driven charisma and seemingly unending supply of energy and love.

“I had the same passion when I was in a gang,” said Anderson, who majored in political science and international relations. “I tell people now, ‘You want to be a gangster? You don’t have to lose that passion, just point it toward something that’s good.’”

Anderson made the commitment to change his life while still behind bars, and upon exiting prison, immediately set out to work to change the lives of others. He is the co-founder of the Los Angeles based Anti-Recidivism Coalition, created by Hollywood producer and noted criminal justice reform activist Scott Budnick, who became Anderson’s friend and mentor.

The group, founded in 2013, has 450 members, all formerly incarcerated men and women who have committed to reshaping their lives. By joining, members pledge to be gang free, crime free, drug free, working or seeking employment or in school and willing to be of service to their community. The coalition provides resources, mentorship, even housing.

Last month, James’ brother Charles was released after serving nine years in prison, and he is currently living at ARC’s supportive housing location in Koreatown. While in prison, Charles earned his associate’s degree and learned how to code through a program called the Last Mile, which helps prepare incarcerated people for jobs in the tech industry.

“He excelled at that in prison, and now he has totally changed his life, and is now being mentored by the founder of Instagram,” James said, laughing delightedly.

Helping his brother was one thing, but Anderson feels called to help kids who remind him of his past self.

Anderson and ARC were involved in the statewide coalition that advocated for Proposition 57 in November, which stripped district attorneys of their unilateral power to decide whether a person under 18 will be tried as an adult and returned that authority to the judges. 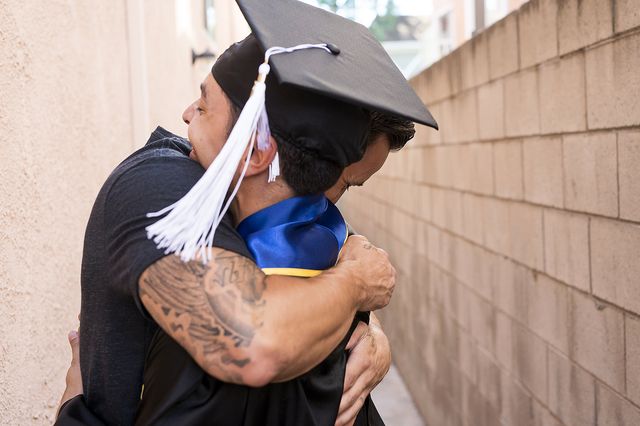 Peter Augustin
UCLA senior James Anderson and his brother Charles embrace as they share in the excitement of his upcoming graduation.

Anderson visits adult and juvenile institutions across the state and around the country. He recently met with 20 kids in Orange County who were back in the juvenile courts thanks to Prop. 57, but who might still land in adult court eventually.

“I was looking at them and I was like, ‘Oh my god, they are all just children,’” he said. “But I know, if you gave me those kids, I guarantee I could help them change and they would never commit another crime.”

In July of 2014, Anderson was appointed to the California State Advisory Committee on Juvenile Justice and Delinquency Prevention by Gov. Jerry Brown. Anderson also sits on the executive board for the Coalition for Juvenile Justice and the board of directors for the John M. Lloyd Foundation.

He travels the country telling his story, helping recently incarcerated people change their stories, and inspiring people to make personal and financial investments toward sweeping criminal justice reform. It’s how Anderson ended up at the White House in 2015 for a Cinco de Mayo celebration and wound up face-to-face with President Obama shortly before he applied to UCLA as a transfer student from East Los Angeles College.

“It has been a joy to have James in class — and to know him as a student and as a committed change agent,” said Jorja Leap, adjunct professor of social welfare in the UCLA Luskin School of Public Affairs and the director of UCLA’s Health and Social Justice Partnership. “In dealing with the pain and struggles of his life with such strength and persistence, James embodies both the best of UCLA and the beauty of the human spirit.”

Anderson’s most recent project is the launch of a Latino street wear company called Los Mayores, which gives a portion of profits to Latino communities.

In 2015 Anderson was the subject of a mural in Philadelphia, a series titled “The Stamp of Incarceration,” which was created by artist Shepard Fairey as part of the Mural Arts’ Restorative Justice program, which works with inmates, probationers and parolees to help them learn new skills through art.

And while Anderson’s path to and through UCLA is unique, he’s not alone. There are at least a dozen formerly incarcerated students graduating from UCLA this year. Many of them were part of a UC-wide program called the Underground Scholars Initiative which offers support and resources to students who have spent time in prison.

“Give people hope, give them opportunities to come out and succeed, don’t give them a million barriers and you would be surprised what can happen,” Anderson said.